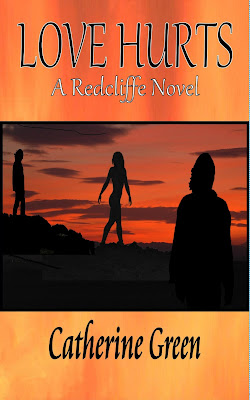 Jessica is living a normal, quiet life in Redcliff in Cornwall. She has her bookshop, her good friends and a general, happy life. It’s quite, but far better than the life she had in Manchester. Her best friend is having a baby and she’s looking forward to playing auntie, and looking after Liz in her pregnancy

And then Jack enters her life. Handsome, sexy and definitely interested in Jessica who finally shows her what real love is really about – both the highs and the lows. With him her circle expands to include many new friends including his intriguing twin brother, Danny.

Of course, things are rather more complicated by the fact that Jack is a vampire. Suddenly her world is widened considerably by vampires, werewolves and witches. Old friends carry long secrets and she has to face a whole new reality – and decide whether she fits into that – or whether she wants to fit at all especially with her own realisations about herself.

While the world isn’t especially novel, it is fun and it is different. Werewolves and vampires working together, the twin bond between Daniel and Jack and her own development as a witch all promise for interesting, unique elements.

The story itself wasn’t hugely unique but nor was it boring. We have a full sense of the emotional impact these revelations have and just how much they truly overwhelm Jessica’s life. Too often in the genre we see a perfectly ordinary woman dropped into a supernatural world and she blinks twice then moves on. Here we have the full strength of that impact. Jessica doesn’t just blink and move on, nor does she accept instantly and absorb everything completely as a wonderful, good thing. It’s nice to see a protagonist who doesn’t just act like werewolves and vampires are no more unusual than the postman being late.

This is very much a story about Jessica’s adaptation to the supernatural world especially with the man she loves. She isn’t really involved in facing down the enemy nor in any mystery or battle except as victim and hostage. That’s not unrealistic though – considering she’s only just been plunged into this world, why would she be up to her neck in it and centre stage in a supernatural war? I do like how we see Jessica battling between her mundane commitments (Liz and her baby, the shop) and her revelations about vampires and werewolves – I think it could actually have been more interesting to see that than to embroil her in a very short lived and rather anti-climactic battle.

In many ways I think this story is a foundation for more to come. A lot of the story was spent setting up this world, the creatures, the characters and Jessica herself in the heart of it, so I think now this foundation has been laid there’s a lot more that can be built on top of it

The main problem I have with the story is pacing. We get to 40% into the book before we see any kind of supernatural elements – by which time I was getting more than a little bored and wondering why I was supposed to care about these characters. This could be because, as a dedicated fan of speculative fiction, I find stories without fantastic elements to be rather dull – and the delay before the fantastic elements was hard.  I admit that this could very much be a matter of taste – and people less focused on Speculative fiction may not find this as much of a problem.

I’m not quite sure what the point of the possession storyline was at the end. I would certainly liked to have seen more exploration of Jessica as a witch- particularly since she could have used some empowerment, than anything else. As it is, the possession storyline may have been setting up the next book, but equally it resulted in Jessica needing saving

Unfortunately, this book falls into a trap that many books do – it’s sadly overwritten. In the opening scene, Jessica wakes up and comes down stairs to her book shop – doing nothing else. But in that time we know Jessica’s history, that she bought the shop with her friend Liz, Liz’s husband, Liz’s husband’s profession, that the book shelves in the shop are made from pine, that there are 3 display tables in the shop, the arrangement of the windows – and generally fills us with lots of information we don’t need to know. Why am I being told so much about Liz? I haven’t met her yet, I don’t need to know – I’m not invested in her, I don’t care about her, not yet. There’s too much telling rather than showing, too much telling as well as showing and too much telling that which simply doesn’t need to be told at all

The dialogue is also, unfortunately, very stilted. The conversations are often overly long winded, lacking the one or two word answers that you actually get in natural conversation. The participants seem to be making little speeches at each other at times, and explaining things that, again, you wouldn’t expect to see explained. And absolutely no-one uses contractions, which is distracting, long winded and interrupts the flow.

Inclusion-wise, this book has zero POC and one gay man. Simon is gay – and manages to avoid many stereotypes being a strong, powerful man. But he’s also a Gay Best Friend. And he’s even referred to as that in the books by Jessica – her Gay Best Friend. Who is there to look out for her, comfort her and watch girly movies with her when she’s feeling sad. He has no real relationship outside of being her friend and (in theory because we don’t really see it) backing up the pack leader, Danny. Compared to Danny, Jack, or even Liz – even Liz’s husband – he has little in the way of independent purpose. We also have the relationship with Danny – who expressly DOES NOT LIKE MEN but may just may make an exception for Simon – so long as it’s hidden behind closed doors unlike his relationship with Sally. That’s 2 highly problematic tropes right there

Jessica herself lives her own life and makes her own decisions, including telling Jack to back off for a time when she needs it. But, in general, I don’t find her a strong character; once outside of the mundane world she quickly becomes rather passive.  She is fragile, but it’s not unreasonable fragility She goers through a lot in this book in a very short time and I think it’s reasonable to have the character be sad, upset, shocked and in need of comfort. Yes she needs a lot of comfort at times – but it’s not unreasonable given the givens. But I cannot say the same about her and Marcus.

Marcus pins her against a wall while she struggles and tells him to stop – he doesn’t. She thinks he’s sexually assaulting her (rather than biting her) and he is stopped only because Danny intervenes. There then follows all the men saying “but Marcus is our friend!” then Jess blaming herself for being drunk, then saying that she was drunk and flirty and Marcus misunderstood – followed by a platonic dinner date and later on sleeping with him. I read this with my jaw dropped. The attack wasn’t ambiguous, nor was her “no” and it was completely swept under the rug.

At which point it seems a little redundant to criticise her having sex with Marcus and believing Marcus when he says Jack won’t mind, they’re not monogamous. Uh-huh, I’d have waited to confirm that with Jack first.

She’s also kidnapped and rescued - and her oh-so-powerful witchy intervention is her mother just telling them to back off and not hurt her before the prisoner exchange – I’d kind of hoped for more.

All in all, I’d probably give this book a 3.5 for concept and world, but I would give it considerably less, for writing style, pacing and it has problematic elements I can’t ignore. Unfortunately this drags the rating down considerably. But it does have interesting story, good world – but the writing and the pacing needs refinement. Which bodes well for this being the first book of a story – a great imagination is what you need to write, a more concise style can be learned and developed. I also suspect that at least some of the problematic tropes in this book are unlikely to be repeated simply because they’d fit awkwardly if they come up again.

So, I’m going to go with that. As a stand-alone novel, it’s not the best, the writing isn’t to my taste, the pacing vexes me and it has some tropes I don’t care for. As a foundation for a series, it looks good, I’m intrigued, I’m curious – I want to see where this goes, the world, the characters and the plot. I won’t hesitate to pick up the next book.