Review of The Mage in Black by Jaye Wells, Book 2 of the Sabina Kane Series 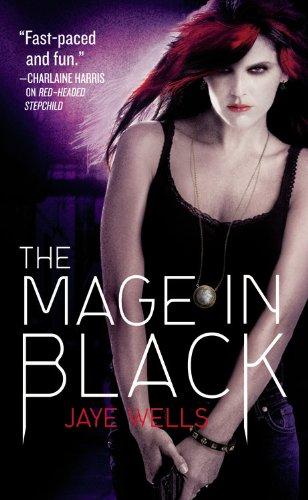 At the end of Red Headed Step Child, Sabina was leaving the west coast to head for New York to finally meet her long lost sister Maisie, the head oracle of the mages.  Sabina is still filled with rage about the betrayal of her grandmother Lavinia, and feels that by getting in touch with her mage heritage, she might find a way to finally defeat her.  This trip also offers the opportunity for Sabina to start over and be a different person from her grandmother raised her to be. In the process of reconnecting to a lost past, Sabina hopes to discover who she really is.

When she gets to New York, Sabina quickly realizes that mage ways are very different from the vampire norms that she has become accustomed to.  Mages are highly concerned about human life and see them as innocents who are not to be harmed.  Being raised strictly as a vampire, Sabina has never had any real concern for human safety. For the first time in her life, Sabina discovers that her physical abilities as a vampire assassin are not going to help her.  Mage life is built around magic and her grimoire contains one spell - the spell for summoning Giguhl, her demon familiar.  Sabina is frustrated by her failure to advance quickly, but promises herself that she will not make the same mistake twice.

Sabina no longer has a source of income now that she is no longer an assassin, and so after being forced into fighting the alpha of the werewolves, Slade offers her work pitting Giguhl against other demons in he ring. Sabina initially rejects the offer but when Giguhl makes it clear that this is something that she wants to do, she eventually concedes and becomes his manager. The demon quickly becomes a hit, though he spends his winnings having sex with fairy prostitutes, that is until he meets Valva, the demon of his dreams.

Just as on the west coast, Sabina continues to be a target and it isn't long before she realizes that a mage is trying to kill her.  A demon is sent to kill her and she barely survives the assault thanks to the help of Giguhl.  If that were not enough, she has to deal with her feelings for Slade i.e. The Shade the vampire ruler of the city, and her blossoming feelings for the mage Adam. The supernatural world is also on the brink of war, and though this is what Sabina wants, the hesitancy of the mage council to vote and the resistance of Queen Maive - the fairy queen to agree to ally with the mages, keeps everything in limbo.  In short, it's a very dangerous time to be a half breed.

Once again, the best scenes in the book involve Giguhl the demon.  When things get too serious, he provides the perfect comic relief, whether in demon or cat form.  Giguhl does not act like a being who is thousands of years old, but it is nigh impossible to deny what he brings to the story.  The relationship between Sabina and Giguhl continues to be funny, even as it is extremely touching.  Though Giguhl is her familiar, she treats him as a being with agency and allows him to make his own decisions, though she has the power to command him.

Unfortunately, Wells engages in a ton of fat shaming in the book.  A vampire assassin who tries to kill Sabina and Adam before they can reach New York is referred to simply as "Fatty".

I sensed movement behind me.  Before Fatty could get his hamhock hands on me, I backed-kicked him in the stomach.  My boot heel sank, into the fleshy layers like I'd stepped into a pool of Jello-O before ricocheting back.  Fatty's belly shook with laughter for a moment before cutting off suddenly. [page 14]

Adam came up from the rear and stabbed the big guy with a stake.  Fatty roared in pain but still didn't explode.  I scrambled up, trying to avoid his flailing arms.  I ducked, barely avoiding one of his fists.
Adam eyes widened. "The stake isn't big enough to reach his heart." [page 16]

Given the vomiting, bullet wound, and fight I'd endured that night, Maisie's idea was akin to offering a fat girl cake. [page 55]


Fat shaming adds nothing to the book and only reveals Wells disrespect and hatred of those who for various reasons, are unable to conform to a very narrow norm.  Garza may have been trying to kill Sabina, but there was no need to use fat hatred to get across the point that he was not a good person.  I am further disturbed by the suggestion that fat people are continually eating.

The Mage in Black continues to have an extreme lack of diversity.  This time the story is taking place in New York City - NYC people, and still there are no characters of colour to be found.  There is no possible way to justify this, as NYC is one of the most diverse cities on the planet. Instead of adding characters of colour, Wells seems to feel that having different supernatural creatures qualifies for diversity. "What if they were trying to start problems? Rile up some racial animosity?" [page147].  So, not only do we have absolute erasure, this analogy suggests that the racial tensions between communities of colour are the same as those faced by the supernatural creatures, in the Sabina Kane series.  I think not and this falls under the category of gross appropriation.

Another problematic element worth mentioning is the erasure of the GLBT community.  As with the characters of colour, this makes absolutely no sense considering that this story is taking place in NYC.  Where are all the members of the GLBT community and why didn't they rate even the smallest mention?  This kind of erasure is obviously not a new thing in urban fantasy, but it does not make it any less irritating.

Sabina really has not grown as a person, despite all of the revelations that took place in Red Headed Step Child.  She is still very much prone to Kellie independence, and does not really stop to think her actions through.  Though we are told a lot about the mage's strong sense of morality, it is clear that Sabina has her own guiding principals, they just happen to be different.  When she sees a fairy prostitute, Sabina is at first tempted to save her and assumes that she is broken and sad.  After a few moments of reflection, she realizes that it is not her job to assume that the fairy needs to be saved and that she has no right to judge her.  This is not the norm of our society and I appreciate that in all things, Sabina is highly conscious of the agency of those who surround her.

Sabina also feels no guilt or shame for her sexual encounters.  On more than one occasion she  admits that she can have a meaningless one night stand to satisfy her sexual needs and move on.  She is more concerned about her feelings of love for Adam, than what being sexual with Slade says about her as a person.  This again is something that is not common in urban fantasy, where slut shaming has become incredibly routine.

The Sabina Kane series is full of problematic elements, but I would be lying if I said that I didn't enjoy this book.  I read it from start to finish in one setting and I didn't see the ending coming. I wish that Wells would realize that her social justice fails are not only offensive, but absolutely unnecessary to tell this story.  There is so much humor in this story from Giguhl's antics, to the recitation of the rule of Demon fight club, that The Mage in Black can more than stand on this alone.  Wells is a great writer and her world is fascinating, and so I hope that in the third novel, she realizes this and moves her story into a more positive direction.