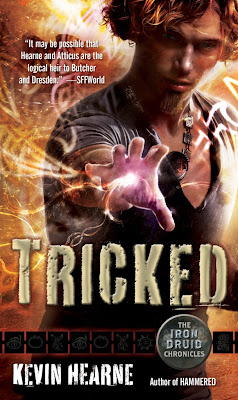 Atticus is back for another excellent adventure. Now having left his home after killing Thor and a goodly part of the Norse pantheon he has some problems to handle. Firstly there’s the fact that the Norse want him dead and so do several Thunder Gods… just because really (they’re thunder gods, they don’t need a lot of explanation).

There’s also a problem of killing a large portion of the Norse pantheon. Seems that those gods were largely the reason Ragnorak wasn’t happening – and now you have Hel and the denizens of Niffilheim running around unchecked. Add in that Leif’s incapacitation means that there’s a whole lot of vampires flocking to the area to fill the void.

And Atticus owes Coyote a favour. Which is never, ever, ever a good thing. It seems simple enough (in an almost impossible way), Coyote wants to rebuild the economy in an area for the Navajo (Diné) people. But the Trickster has far more in mind than that – as you would expect – and Atticus soon finds himself up to his eyebrows in far more than he expected.

When I finished this book I was sad. Because it was over and I now have to wait months, MONTHS, before Kevin Hearne releases another awesome book.

To assuage myself I turned back to page one and read it a second time – I didn’t even put it down between readings. Alas, I have finished it again and, again, I am sad that it is over.

In short, this book is most awesome.

What? You want more?

The characters are amazing. I love Atticus and Granuaille and their relationship. Atticus engages in a lot of deep and fascinating introspection, grows as a character as he accepts his own arrogance and pride have tripped him up once too often. And, of course, he is utterly and unbelievably funny and awesome with amazing wit, clever ideas without them being ridiculously over the top and a powerful sense of both the ridiculous and righteous wrath.

Oberon remains beyond hilarious. And he gets to be the hero as well, showing he’s not just a witty, sausage obsessed doggy with the best lines. And Snugglepumpkin has a very very very amusing and likely accurate hypothesis.  The whole book is full off wit and humour that lightens

The world is incredible – the pantheons of the different gods and belief systems with creatures and beings from each pantheon and culture all apparent. And the mob attack by the collected thunder gods was worth reading over and over again.

This story has plenty of unexpected twists in it – I completely didn’t expect the Leif storyline and was bowled over by it. I didn’t expect Hel’s appearance and I totally thought Atticus’ master plan would go much much differently from how it did. I can’t say more without spoiling it and this book is just too awesome to be spoiled.

We also have some wonderful side commentary on class, the political system, and that Dickens was paid by the damn word (and, yes, Atticus, it shows). Nothing is overly laid on to the point of lecturing but a lot is portrayed – about the power of large companies, considering environmental consequences and the often exclusion of marginalised people and areas from national consciousness.

Inclusion-wise, I love that Atticus ex-wife of whom he speaks in the most loving and cherishing of terms and was apparently a strong and powerful woman, was a black woman. I’m also deeply and impressed by the treatment of the Navajo in this book. There is a vast amount of research here, a whole lot of fully explored myths, cultural practices, language and beliefs. The native characters are presented respectfully and as people – not woo-woo dispensing wise brown people trailing stereotypes behind them and they’re not just an insert to get some big bad bugaboo for the white protagonists to face. Throughout, Atticus, despite his 2,000 years of age and his long history of lore and experience defers to and respect their power, experience and wisdom – and the one time he doesn’t treat it with total deference he chastises himself for his own pride and arrogance.

This is one of the best portrayals of Native American characters I’ve seen in Urban Fantasy. So much information, so much fully fleshed characters – even side characters, so much research, it’s refreshing to see more than just “hey this is a Skinwalker and a Wendigo – they’re sorta like werewolves, raaawr!”

And Coyote is awesome. Yes yes he is. And very very tricky.

If I had to drag up one minor criticism (and it’s hard because every fibre of my being screams that people who say anything negative about this book should be viciously fanpoodled to death) it’s that there is a lot of information presented with both lectures and internal musing. But he has an apprentice who he should be lecturing so it’s fully justified in the story – it also shows both character growth and is both fascinating and amusing to read as well.

Did I mention this book is awesome? Because it is ridiculously awesome. And I want to read it again.