Review: By a Thread by Jennifer Estep, Book 6 of the Elemental Assassins series 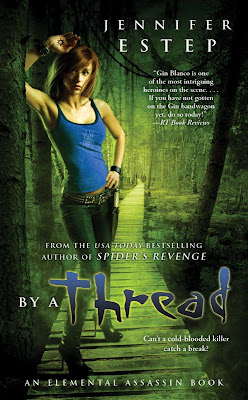 Gin Blanco is having a holiday. There’s just too much stress in Ashland, especially since everyone knows she’s the Spider now and she’s constantly having to fend off petty thugs trying to take her down for the reputation. Time for some relaxation with just her, her friends and her sister Bria, to see if they can finally build a relationship in the aftermath of the epic battle they just fought

Of course, even on holiday there’s no peace. Bria’s best friend since childhood is being menaced by a powerful vampire of extreme influence and power. Past people who have stood up to him have died – and he’s virtually untouchable from the police. Of course, being untouchable to the police doesn’t make them beyond the Spider’s grasp. And she’s just killed the most powerful and devastating elemental in 500 years  - how hard could this be? But Gin’s own over-confidence may be her undoing.

And there’s another problem – her old lover, Donavon, is Bria’s friend’s fiancé. And he’s just as judgemental and disapproving as ever – firmly holding to his morality that won’t have anything to do with assassins no matter who they are killing and why. He doesn’t want her help, even if it costs his fiancée her life. Worse, will opposing Donavon’s morality also put her at odds with Bria, another police officer who is more than a little disapproving of Gin’s murderous ways?

I won’t say the story was exactly a twist per se – but it wasn’t linear either and it did catch me by surprise. Because of the aftermath of killing Mab, there was a strong sense that Gin was just going to walk over the enemy – the real conflict was going to be Donovan and Bria disapproving of her naughty murderous ways and getting in the way of her actually getting the job done. It wasn’t going to be difficult to kill the bad guy – but it was going to be hard to do so without Bria and Donavon knowing and/or handling the fallout. So I was shocked by the twist that all that confident set up was a case of supreme over-confidence and  cockiness – which turned into a storyline to run along side the much better planned assassination attempt, the hecklers disapproval  and Gin’s re-examination. I think this made the story work on many levels and in many ways because we had the same plot line but multiple different themes and twists on that plot and the implications of it and what it means for all of the characters and their interactions. It took the plot line and made it far more complex and nuanced than imagined – while keeping the excitement of hunting down a truly evil, exploitative and powerful foe and examining related issues without being bogged down in angst

I did like how Gin learned in this book and grew in many ways. In particular I liked the mistake she made. She’s just killed her nemesis, the most powerful Elemental in centuries, or so everyone says. And she’s, well, cocky. She’s a little arrogant about it – which is a very natural human mistake, but it’s also a mistake and it does end up costing her.  This was really well done because it was a humanising element of Gin – yes, the Spider believed her own press too much and after spending the last few weeks killing low level thugs she’s underestimated a severe situation. It also helped re-establish tension in the story. We have killed the big bad, but something doesn’t have to be on par with Mab’s level of personal power to be dangerous nor is Mab the only person out there with that kind of power. For the story this is a great step because it re-injects the tension and threat rather than us, like Gin, resting on the laurels of Gin’s power and Gin’s victory – the fact that the bad guys are still dangerous and deadly has been really well reinforced.

Now while I’m not especially pleased at the amount of violence Gin has inflicted on her, she does have a violent profession and she usually stabs the people who attack her so it’s very much redeemed. Similarly, the mistakes that Gin made in this book were reasonable not Spunky – and she asserted her agency and self-worth (and had both validated) in an amazing way which we have needed for a while.

Which brings me to the next issue of growth I adored. Gin embracing that she is an assassin and refusing to be ashamed of it. For a long time she has been judged for being a killer – first by Donavon and then by her sister Bria – both are very good, very honest, very by-the-rules people and judge Gin for being such a bad/evil person. But they’d both be dead – along with most of the rest of the characters – if it weren’t for Gin’s willingness to kill. In the extremely corrupt world they’re living in, playing by the rules is not only naïve, but in the face of some of the murderous people they’ve faced, it’s almost morally unconscionable. But still they judged her and its been getting on my very last nerve as Gin cringes back in shame from their judgement and her own damaged sense of self-worth as she hunts for the love of these two people.


But this book wonderfully transformed that. With Bria waking up, seeing how Donavon was treating Gin and seeing echoes of her own behaviour in it she became aware and both stopped judging and affirmed and praised Gin for doing what she did, helping who she did and saving who she did – including Bria herself. But even more epic was Gin’s treatment of Donavon. This is the man who rejected her, the man who looked down on her, the man who was disappointed that she lived because she would continually “tempt” him and lead his poor, pure self off his own rigid moral path (by reason of her irresistible sexiness – because the man just couldn’t resist, uh-huh) and the man who, in this book, assumed Gin would be happy to fall in bed with her as he looked down on her from his oh-so-lofty and superior perch. I put down the book and cheered when Gin put him in his place, slapped him down and made it clear she wanted absolutely nothing to do with him. There was no regret, no mourning, no pain – she has Owen now a man who loves and accepts her – all of her – and has no time or patience for his arrogant, superior bullshit and even less for him touching her without her express consent. I say again, I cheered. Frankly, this book is worth buying just for that perfect slap down at the end.

There were very few POC in this book, even less than usual, but we did have a return of Latino Donavon, the uber-moral by-the-book policeman. Again there were no GBLT characters.

Women-wise this is more complicated, like the whole series. Other than Gin we do have another lot of women in distress who need rescuing – even when it’s Gin doing the rescuing we do have a lot of women who are helpless and in need of a white knight – especially since rape is a commonly used and threatened weapon throughout the series. Whenever we have a pro-bono “saviour” story the victim has either been a woman or has been threatened through their female relatives (and that threat often included rape). On the flip side, the hero is a woman who is never threatened without consequence (though, again, rape features highly in the threats used against her) and she is surrounded by some very powerful women who are all very strong in their own way – Bria, her sister, Jo-Jo, Sophia, Rosalyn are all extremely strong in very diverse ways – but, except for Jo-Jo, they’ve all been victimised as well. So it’s a mixed bag – we have strength and power and agency and wisdom and wonderfully real, deep characterisation who most certainly past the Bechdel test, but at the same time we have a spectre of constant victimisation hanging over them

All in all, this book and the last novella are a brilliant way to transition from the epic fight with Mab to the next ongoing struggles. Gin has had her downtime, we’ve had some time to focus on her, her sister, her friends and to firmly put Donavon to bed. And we’ve established not a new specific threat – but the potential for a new threat which is vitally important after such an epic battle. All in all, a great book and just what the series needed.