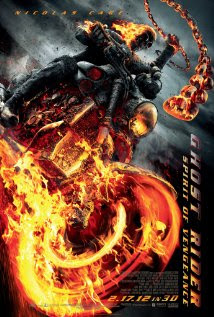 This second installment in the Ghost Rider Series was released in 2011 and stars, Nicolas Cage, Ciarán Hinds and Idris Elba.  Johnny Blaze has separated himself from humanity as much as possible and has learned somewhat to control the rider.  He is very much desperate to find away to free himself from the ghost rider. When he is approached by Moreau who is played by Idris Elba with a deal to free himself by saving a child named Danny. Johnny is leery at first because he doesn't really do protection, in fact, his sole purpose for existence is to punish the evildoer. Johnny takes the deal when Moreau promises him that he will free him from his curse.

Danny is on the run with Nadya from Roarke. They are in danger because Nadya made a deal with the Roarke when she was on the cusp of death. In return for being allowed to live, Nadya gave birth to Danny, Roarke's son. When in human form, Roarke is very weak and that is why he wants Danny.  Apparently, Danny has all of his power and none of his frailty and so he wants to put his essence inside of Danny.

This is essentially a movie that moved from one explosion and special effect to another. The plot is absolutely thin.  If you're going to watch this movie, do so with the expectation that there will not be any great acting despite Edris Alba and Nicholas Cage. Watch the movie for the special effects. I do have to warn those who saw the first Ghost Rider movie that the special effects this time around, are not nearly as good as the first movie.


There are no GLBT characters and no disabled characters, there are however several characters of colour. In order to make money, Nadya is forced to steal.  In one scene she attracts the attention of a middle age married White man.  He begins by telling her that he is rich and expresses concern that she is a gypsy and will rob him in some fashion. Danny shows up and he quickly makes his mistake but not before Danny can relieve him of both his wedding ring and his wallet.  This scene reifies everything he was worried about.  To be clear there is no counter to his use of the word gypsy as a slur and the fact that theft really did occur, cast a negative aspersion on a people of colour.

Though Moreau is meant to be understood as heroic there are several problematic elements to his character.  He is the mystical religious man who has the cure for Johnny and he sees Danny's humanity when the others do not. His final act is to surrender his life in an effort to save Danny, which ultimately makes him disposable. He exists solely to guide Blaze to Roarke but the role of hero is reserved for the ever so White Johnny Blaze.

For his part, not only does Blaze save Danny from Roarke, he learns that the Ghost Rider is actually an angel which was corrupted through torture. Moreau tells him that the angel is "crazy."  Though we are talking about an angel it is worth noting that its mental instability is what makes it violent and this feeds into a negative trope that is often associated with the neurologically atypical.  Someone who is not neurological typical is far more likely to harm themselves than others, but this is never the way that the media presents it. It is further problematic that Blaze is able to bring the angel back to the surface. All that Moreau could do was banish the ghost rider, but of course -- the purity of Blaze's Whiteness cures all.

As aforementioned, this is not a movie that offers us much in terms of acting or plot.  It is basically a vehicle for motorcycle tricks and special effects.  The rise of the angel inside of the ghost rider is clearly a set up for yet a third installment of this film. I suppose now Blaze is going to protect the innocent rather than hunt the guilty, but I hardly see this adding anything to an already thin cannon.