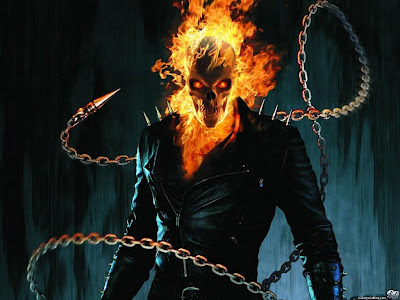 Ghost Rider was released in 2007 and stars, Nicolas Cage, Eva Mendes and Sam Elliott.  It's Marvel character, stunt motorcyclist Johnny Blaze. I really didn't expect much from this movie, as Nicholas Cage has been appearing in everything and anything recently to try to regain some of his lost fortune, however I must admit that I was pleasant surprised.
The movie begins in the old west with Carter Slade, who is that generations ghost rider.  His job was to pick up the signed contracts for Mephistopheles, until he comes across a contract that contains 1000 souls and realizes that he cannot let the devil get his hands on it and so he did what no other ghost rider had ever done, he outran the devil.
In present day, Johnny Blaze is a young man working as a motorcycle jumper with his father at a carnival.  He is in love with Roxanne Simpson and is desperate to run with her.  Johnny realizes that his father is desperately ill and in his dreams, Mephistopheles convinces him to sell his soul to save his father's life.  Johnny believes that this is a dream until he wakes the next day to discover that his father is healthy.  With his father healthy and Roxanne's family about to move her away, because they feel that he is not worthy of her, Johnny makes the decision to leave and build the life that he wants.  His father goes on to do the stunt by himself and falls, dying in Johnny's arms.  Instead of meeting with Roxanne, he drives right be her, leaving her standing in the pouring rain.  He sold his soul for love, but it got him nothing.
Fast forward to the future and Johnny Blaze is not a bit of a celebrity for his skill of jumping motorcycles.  He takes riskier and riskier jumps, trying to prove to himself that it is him doing his stunts and out of a determination not to live in fear. What he does not know is that Mephistopheles still wants the contract and that he is competition with Black Heart to get it.  Black Heart wants the scroll to have enough power to take over Mephistopheles' roll.  When Mephistopheles realizes that he cannot defeat Black Heart in this sphere he decides to send his rider after him.  This is when he strikes a new deal with Johnny.  If Johnny destroys Black Heart and hands over the scroll, he promises him that he will return his soul.
The special effects in this movie were absolutely phenomenal, though some of the scene were a little dark to accurately see what was happening.  Through much of the scenes in which the ghost rider was center stage, it felt like a comic book coming to life.  It was easy to get drawn in and the effects never overwhelm the story, but create an equal balance, which encourages the viewer to suspend belief.
As Johnny Blaze's love interest, Eva Mendes is great.  She is strong willed and demands answers.  I love that she is not quickly snowed over upon seeing Blaze after so many years.  I was however upset that once stood up for a second time that she experienced self doubt about her appearance, rather than cracking it all up to Blaze being a player.  This however is slightly redeemed by Roxanne seeking out answers to why Blaze left her.  It was great to see a woman of colour as a love interest, instead of the typical Hollywood starlet but it is worth mentioning that the director should have sought out a woc to play young Roxanne.  The actors who played Johnny Blaze at least nominally resembled each other, but that cannot be said of Roxanne.  The first time I saw the mature Roxanne on screen, I had no idea who she was, whereas with Johnny, it was clear who the old Johnny was from the start.

In once scene in the movie, Johnny Blaze is placed into a jail cell, which held multiple criminals.  When he is set upon by the criminals, a young Black man tries unsuccessfully to protect him.  Unfortunately for the criminals in question, the Ghost Rider makes his appearance and then annihilates them all with the exception of the young Black men.  The Ghost Rider then points at the young man and says one word - innocent.  Though this was a really small scene in the movie, it really stood out to me because far too often, Black men are constructed as criminals in movies.  The fact that this man was not only innocent, but innocent in jail, I believe made a very interesting social point.

At it's heart, Ghost Rider really still comes down to tortured White man saving the day, and making the world safe for everyone. There is absolutely nothing new or innovative about this.  There is nothing about the character itself that specifically demanded a White male actor.  I know that Marvel fans would be up in arms at the change, but I think that Marvel needs to be more inclusive in its choices for protagonists. People of colour need to more than girlfriends, or side kicks.  Johnny Blaze was so neutral that he could have been a man of colour.  Beyond race, this entire movie had not a single GLBT character, and the only romance was of course straight.

Cage completely worked out for this role and displayed a nice six pack.  This fell right in line with characters that we were meant to take seriously as being slim.  A woman who the Ghost Rider saves from being mugged is fat, and when she describes how she was saved, she deemed mentally incompetent by Roxanne and her camera man Stuart, and reduced to comic relief.  Mack, the only other character of size, is Johnny's friend and Blaze barely pauses when he discovers his dead body. Clearly this tells us that not only are fat people disposable, they are not to be taken seriously.

Ghost Rider moves along at a pretty rapid pace.  There are very few twists and turns and instead, Ghost Rider depends on the special effects, rather than a gripping plot to keep viewers interested.  At no time did I doubt that the good guy would save the day.  Ghost Rider gives the viewer exactly what is expected and that isn't necessarily a bad thing, but it would have been nice to see a push for something more.