Review: Sins of the Demon by Diana Rowland, Book 4 of the Kara Gillian Series 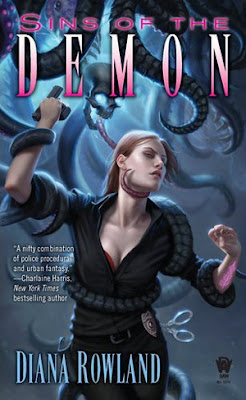 People are dying around Kara Gillian again… though apparently from natural causes. Except, they all died the same improbable way, and they all have one connection – Kara. People Kara had every reason to want dead.

Then we have portals, hidden portals around the city, all of them linked both to each other, and to the mysterious deaths. There is something big behind them – but who and what that is a long and confusing mystery.

Along the way we learn so much about Ryan, about Kara herself, about the world and all with more surprises than I ever imagined to come.

All in all, I can’t summarise more of the plot without giving important things away, because it’s so subtle and so wonderfully put together. It’s also very focused with limited side plots and distractions.

I did not see so much of this book coming. I’m still kind of shocked from it. It’s rare for any kind of detective story to so completely catch me by surprise, but this one blind sided me. I didn’t even come close to imagining the bad guy was the bad guy – but nor was it ridiculously convoluted or unimaginable. More, the clues were beginning so early and they were there and I could see them – little things she did, little changes, the sort of thing you don’t realise the significance of until looking back and then you go “oooooh, I see it now!” And isn’t that a classic sign of a good detective work?

And the story and the mystery was perfect. Honestly, this was a complete “can’t put it down” moment. There’s so much to the world and the pieces are all there but they’re not coming together and I was just driven to keep reading to find out what exactly what's happening, what’s behind everything, what are all the secrets. The whole huge world is coming together and revealing more and more of itself in fascinating ways, the mystery, the demons, the plots of the demon lords – it’s fascinating and intriguing and exciting and fun. A great combination of police drama with fantastic supernatural elements

Some of the praise I have for this book is praise that I’ve said before for the series, but it needs repeating because it’s just as good in each book. We can clearly see that Diana Rowland has police experience. I don’t think there was as much class commentary in this book, but nor do I think there was the opportunity for it though we did see, yet again, a powerful official trying to abuse his position and how common and easily it is done unless the rank and file (and police chief) are furiously resistant to corruption. If anything, this book was much more personal to Kara, it was more about her than any of the other books and very much about cementing her relationships as well. Interestingly the pacing for this book was still excellent, and I say excellent because the story didn’t have a large number of side-plots to fill the gaps either. Usually any detective story has quiet moments that need filling to keep the story moving and tense – but here we had Kara’s own life and relationships to fill the gap that were more than entertaining enough to keep things moving.


Her characters are funny, real and rocking. I love Eihlan and her kitty and her waffles. Jill is supremely awesome, everyone needs a Jill. Zack is fun and while I’m not a big fan of Ryan, he adds to their circle well and his huge mystery and questions are a constant source of intrigue. I even like Kehlirik, the 12th level demon with his frequent guest appearances. I think all these characters have some truly great banter and the dialogue is perfect, frequently laugh out loud funny and never fails to entertain.

Jill is awesome and in many ways nicely counters Kara’s own insecurities. Whenever Kara is following a line of neediness or self-judgmental nonsense,  Jill is there, kicking arse and setting things straight. I love how this works, because it serves to stop Kara’s own, individual insecurities from being wider tropes – because whenever Kara falls into one of her pits, Jill is there to help her out of it, give her a smack and plant her feet firmly back on the more sensible path.

There is also a decrease in the fat shaming in this book, but this, in part, could have been because of a lack of real opportunity to fat shame, as the recurring fat character wasn’t present much (though I did appreciate that that character is being made less of a 2 dimensional character to dislike).

Inclusion wise, we still only really have 2 POC in the book, though one did play a bigger role than before, and we still have no GBLT characters. I’m having to grudgingly remember to criticise these elements, as half of my brain growls “don’t criticise the precioussssss”. I would like to see a more diverse cast here, it is very straight and very white.

My first reaction on finishing this book? “NO YOU CAN’T STOP THERE!” because holy cliffhangers Batman, that was unfair. I am not intrigued about the next book, I am simply desperate to know what happens next in a “when it’s released I’m going to take a day off work and read  none stop until I reach the end, then I will read it again” fashion. I need to know what is happening in the next book in the worst possible way. I never, in a million years, imagined we’d end up here and I can’t stop filling in the gaps in my mind, trying to guess what happened and how it lead to this.

We have reached fanpoodleness. Go out, buy the whole series twice, one for you to read, and one to give a friend, they’ll thank you for it later. This is a truly excellent story and I don’t think I can gush enough to make that clear.