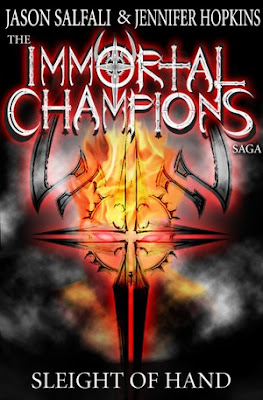 I started reading this book with a fair amount of hope – I often find co-written books curious. I like to see if the styles blend well together and if those 2 people work well together you can have an excellent book. It’s almost like having an inbuilt proof reader, everything written is re-read and checked almost as soon as it reaches the page.

As I read, I clung to what did seem appealing. The characters are extremely diverse racially and there’s a broad cast each with their own issues and agendas. There’s a teenaged romance in there which, I expect, would bother me over time but apart from that the underlying concept of the story is an intriguing one – a demon born as a human, unknowing of his past and his heritage, coming of age and into both his power and his memories. As well as facing the actual agenda of his demonic siblings.

The world also looked interesting. While not unique, it had definite suggestions that it was going to be rich and truly epic with one of those grand “the world hangs in the balance” conflicts that always appeals. Yes, I like the epic, I do.

Unfortunately, after 100 pages, I’m afraid I just couldn’t continue. These characters, the plot, and the world is all depressingly defeated by a writing style that wasn’t so much a barrier to enjoyment, but a giant brick wall to understanding.

The sentence structure is stilted. With lots of short sentences. Written like this. Over and over. And it’s really annoying. It’s also very over-written – a man is running down stairs to confront the mob breaking into his home, and we get an elaborate description of the bannister. The wording is, frequently, ridiculously melodramatic and everything is described in excessive, grandiose terms. It actually feels very immature, with its convoluted style, excess description, excess inserts and general difficult sentence structure, and some of the most stilted and clumsy conversations, and most awful info-dumping (including a classic “as you know…” dump) I’ve ever seen.

“These two figures stood within the expanses of the Underrealm. It was a place veiled in total darkness. No human new what form it was in. If you were one of those who screwed it up, up there, then you went down, down there, where they were waiting for you.”

This quote is only borderline comprehensible and, to me, suggests not only a lack of beta or edit, but even a lack of author read-through.

Tomorrow he would talk to her. He didn’t have to wait that long. She walked into the dining hall just then. Ashton sat up straight.

He looked for her immediately. She sat next to Maria in the front row. Her body was turned towards the back of the room. She was talking to the guy who sat behind her.

It makes me think vaguely that someone tried to write a book using a series of haikus. This style is used repeatedly throughout the book, and only really stops when the over description takes over.

Sitting next to his desk partner, Ancine, with his elbow on the hard wooden table and his chin resting dutifully on his right fist, he began to nod. The tips of his fingers glided softly across the side of his face, reshaping his skin as gravity brought down the weight of his head. He jolted then and repositioned his chin back on top of his hand. In the other hand he held his pen upright on the paper of his notebook.

This is an awfully wordy way to describe someone falling asleep at their desk.

He was refreshing and knew how to rub people the right way.

Okay, yes it may be immature, but I had to giggle. This line suggests that maybe, perhaps, this book was written by people for whom English is a second language?

All in all, this book could have been an extremely good book. It really could. It has so much going for it, an epic world, a decent story, a diverse cast, some interesting ideas. But I’m finding it honestly painful to read, and all those promising elements have been swamped by some of the, and I’m sorry to say it, worst writing I’ve read. I just couldn’t finish it.

We were provided a copy of this book to review by the author.
Posted by Sparky at 12:00 PM