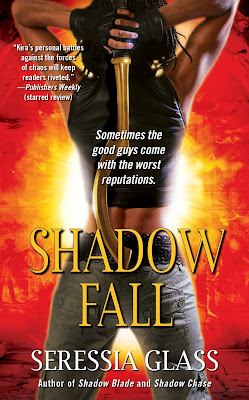 Kira is faced with a lot of revelations in this book. Balm has presented her with a package full of all the answers to the questions she always asked. Who her parents where, why she has her powers, why she was raised by the Gilead – a Pandora’s Box of answers, if Kira feels she can face them. But some truths are hard even for the hand of Ma’at to face.

Even simpler truths abound – such as exactly what she feels for Khefar, the 4,000 year old Nubian warrior who remains the only man she can touch and who is sworn to destroy her if she falls to shadow. And then there’s her friends – and what they feel about her after her many brushes with shadow magic.

But more than that, she has to face a shifting understanding of the world – of the shadow magic inside her, as a part of her and with both the Lady of Balance and the Lady of Shadow having a claim on her as much as the Light did. And if these questions weren’t hard enough, she suddenly finds her advisors silent – Balm, Ma’at and Anansee. What she does have in their place is the Lady of Shadow – and Set, the Egyptian god of Chaos who is also staking his claim on Kira

Story wise, I’m afraid I wasn’t enthralled. A large section of this book is spend with Kira realising she has Shadow magic in her as well as Light magic and that it isn’t infected into her, it’s actually hers through her ancestry. She has to deal with recurring nightmares of Set, the very avatar of chaos in her own pantheon. And this is huge. I mean, after so long believing all things shadow is evil (and for good reason. In fact, brief tangent, if we’re going to talk about “order” and “chaos” and “balance” it would help if the shadow weren’t presented as entirely and utterly evil) and then realising that it makes up part of her ancestry? Believing she has this evil in her blood? Believing she is going to be inexorably pulled towards this evil – something she fears so much that she asked Khefar to not just kill her but unmake her entirely should she succumb? Yes, this is going to disturb Kira. She is going to spend a lot of time very upset about this, very worried about this and spend a lot of time being, well upset and worried.

So I’m not concerned with it being realistic… but it is a lot of the book spent on this. And while it makes sense that she would be rather overwhelmed by it, I just don’t find it a particularly fascinating read – as the turmoil just keeps going on and in great detail. And it doesn’t help that there isn’t a great deal of other plot to balance it or hold it down. It’s ironic really because Kira continually laments how little time she has but doesn’t seem to actually do an awful lot.

We also have a scene were Kira decides to witness the werehyena challenge for succession. Which she does and it’s interesting, gives an insight into a few things and general fun to read but… it adds nothing to the story. It’s just this orphan scene dropped in there for no apparent reason. There are other similar scenes – like the big tense showdown with the banaranjan on the top of the Gilead building. I’m not saying they’re bad scenes – they’re not, they’re good, they’re interesting they add to the world and I enjoyed reading them – and normally I wouldn’t mention them. But these scenes, added to Kira spending so much of the book in self-analysis and worry and general little attention to the main plot line until the end of the book. The plot line, when it arrived, was epic, powerful and full of great climactic scenes of awesomeness – but it was a bit late coming

I repeat again, these weren’t hard or boring scenes to read. Nor was Kira’s upset unrealistic, out of character or in any way wrong. But I would have preferred more focus on the main plot, reaching the main plot earlier and generally more involvement of the main plot. I still enjoyed reading all of these scenes and thought they were well written and added to this wonderfully rich and complicated world. I love this world, I love the forces of light and shadow, the three ladies of light balance and shadow. I love the ancient Egyptian pantheon, love the different magics and the vast number of different hybrids and not just following the same tropes of vampires and werewolves.

Characterwise, I generally like Kira. She’s tough, independent, (relatively) clear of Spunky Agency and has only a few unfortunate moments of Keillie Independence. Yes I think her independence is pushed into arenas of not playing well with others and her unwillingness to work with the Gilead on a practical level can be vexing – but none of this is taken to levels of ridiculousness or make me frustrated or angry with the character. They’re character traits rather than tropes.

But she felt a little… lacklustre to me in this book, partly because of the story problems mentioned above. She spends a lot of time navel gazing and angsting, bottling everything up and not talking to anyone while Khefar comforts, supports and is generally the big strong wall for her. When the action kicked in, Khefar seemed to kick considerably more arse than she did and when it came to the big bad show down she won less from skill or ability or intelligence so much as from super woo-woo. Perhaps given props for willpower? She didn’t even charge heroically into the epic battle alone, she was separated then kind of fell into it. I don’t know, it felt like she didn’t do a great deal this book and anything she achieved was achieved with relatively little active input from her.

Of course, even the strongest character is entitled to be weak or vulnerable some time and she has been strong and powerful (and not in need of a shoulder to lie on) in previous books. Again, this isn’t unrealistic exactly considering what she’s dealing with this book and we do have her most excellent history to fall back on so I’m not going to dislike this character, this just wasn’t her best moment.

Inclusiopn wise, the book has an impressive array of POC, with most of the cast being POC and well written, fleshed out and real characters. Not only are both Kira and Khefar fully fleshed out, very real and very appealing characters but so are most of the side character we meet, attention is clearly being spent in making everyone a real character rather than a stand in. I love these characters and can see them very much as real people. But I do miss Anansee, he was one of the best characters.

Unfortunately, it’s not so good with the GBLT representation. After the problematic gay men in the last book we have problematic lesbians in this one. It seems Kira’s mother and Balm were lovers at one point – which sounds wonderful, the leader of the Gilead, the leader of the Light, is a bisexual woman. Who saw her female lover raped, die and then turned to a man instead. Y’know, there have been exactly 2 gay relationships in this series now, in both cases we had a tragic death.

All in all, I liked this story. I continue to love these characters, I continue to adore this world. I also think it was extremely necessary to have Kira emotionally address what she has learned in general and about herself and adapt to her new understanding of the world. As well as perhaps moving into a new episode of the story from a new perspective. I look forward to her running into the next book arse kicking – and I hope she does because we had a little too much stumbling in this book for me to be completely enamoured.