Review of Duncan by D.B Reynolds Book 5 of Vampires in America Series 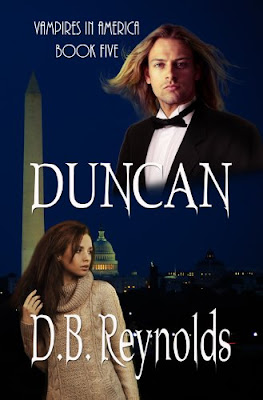 Once again, in the interest of being fair to D.B. Reynolds, I feel that it is necessary to disclose that I am not a fan of paranormal romance, so please keep that in mind when reading this review.
Duncan, Raphael's longtime second in command is finally ready to become a master vampire.  Though he will always see Raphael as his sire, it's time for him to have a territory of his own.  With that in mind Duncan travels to Washington with a few people loyal to Raphael and is met by some of his own children.  He kills Victor and becomes not only a vampire lord, but the representative of Vampires in government because his territory is Washington.
Duncan quickly discovers that Victor, the former lord was very corrupt.  Emma Duquet, who has no interest in vampires or their politics arrives in what she calls the embassy to find out what happened to her best friend Lacey.  It appears that Victor invited Lacy to one of his special parties and no one has seen her since.  Duncan promises Emma that he will look into the disappearance of her friend.
When Lacey is discovered dead, Duncan promises Emma vengeance - the only thing that can hope to bring peace to her broken heart.  Though Emma and Lacey are not actually related, Emma considered her, her sister.  They were both children of the foster care system.  Once again, we have a woman whose parents are missing, and who had a troubled background fall in love with a vampire.  Can this trope be anymore cliché at this point?
Speaking of cliché, this book is filled with a lot of flashback scenes to give us a stronger sense of who Duncan was in his human life.  It turns out that Duncan was a soldier for the confederate army, who would have died on the battlefield were it not for Raphael.  I don't understand the obsession and the constant desire to romanticize the confederacy.  Can we all just remember for a moment that this is the side that fought to ensure that African-Americans enslaved.  D.B. Reynolds never addresses this, or even gives us any idea of where Duncan stands on racial politics today.
The entire point of paranormal romance is that at some point their must be a romantic relationship.  I can accept this premise, but what I cannot accept is said couple declaring undying love forevah and evah after knowing each other for a week.  At best what we have is a good old fashioned case of lust.  Love is something that happens over time.  I think it cheapens the emotion to have characters declare love after just a week. It is further troubling that though there was clearly consent in on sexual activity, sex was clearly something did to Emma, rather than something they engaged in together.  He was always performing sexual acts on her, and there was no reciprocity whatsoever.  We were continually reminded of Duncan's iron control, but this helped to diminish Emma, and made the relationship appear highly unequal.
What I liked about this book was the complicity of senators and powerful men in Victors corruption.  It sent a clear message that men in power not only abuse their power, but expect to get away with it.  Emma and Duncan know very well that these men are extremely well protected and that were they decide to take this to human police, not only could it potentially remain in court for years, but that they would probably get off.  This is a powerful statement about the fact that the more privilege one has, the more likely it is that one is able to act with impunity, even when it's a case of murder.
There was the usual problematic language in this book, with Duncan calling Emma his.  Heaven forbid it be understood that women are not possessions, which may be claimed at will.  This of course turned the sex act into the equivalent of a dog marking its territory.  Emma wants to hear the words, "I love you", and is unsure of what to make of Duncan's declaration, and so I suppose that is something, but Reynolds could have taken Emma's confusion much further.
Of all the books of this series to date, I have to say that Duncan is the one I liked the best.  Many of the problems with the book are actually common to the genre itself.  The mystery was will written and the story was extremely well paced.  I hope to see Reynolds continue to grow as an author.  It is possible to tell a romantic story without fail and from Duncan, it seems that she is headed in that direction.