Review of Purification by David Moody: Book 3 of the Autumn Series 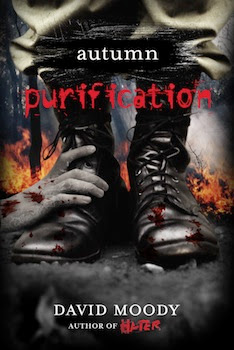 When last we had left the survivors, they had managed to find shelter at a hidden military base.  Here they believed that they would finally have respite from constantly being surrounded by the dead who seemed to want nothing more than to tear them apart. With nothing left to do but think about the future thanks to the fact that they have been sectioned off from the military the survivors being to hope for the day when the zombies will finally finish rotting and stop being a plague. They worry that the day will come when they are sent out to get more supplies because the soliders embedded at the base are still subject to the poison in the air that they are immune to and they wonder about how this terrible event all started.
The safety of their new residence quickly comes into question when they discover that they are so surrounded by the dead that the air purification vents aren't functioning properly, thus forcing the military to look for a solution.  When this turns out to be successful the military attempts to push their advantage, leading to disastrous results that cause the survivors to leave and search again for somewhere safe.  Is there anywhere left where they can potentially be free from the continuing threat of the dead?
Fortunately for them, the have a chance meeting with a helicopter pilot who tells them of a small island, which had a tiny population.  Suddenly a ray of hope is presented to them.  Could they actually find a place to build a life and finally stop running?  Is this humanity's last stand?
For the the first time since the virus was unleashed, the survivors think about what the future might hold.  It is then that they realize that simple things like running to the corner store for a pack of smokes. Not running and not fearing for their life every moment of the day, forces them to process the things the horror of everything that they have seen, and those that they lost. Even blunting these emotions with alcohol is not an option as the days of a jot down to the local pub is no longer possible.  With each passing page, as a reader I could feel the weight of loss and change even as I kept rooting for the survivors not to give up.
Moody's writing continues to be stark and yet so descriptive.  Reading this novel you can smell the rotting flesh and the stink of desperation of the survivors. At several times Moody takes care to point out that the world is slowly being reclaimed by nature. With nothing to stop them vermin like rats and mice begin to roam freely, mold attacks buildings and the infrastructure becomes unstable. I must admit that this did not seem logical to me.  Despite the fact that this is the third novel in the story, only 8 weeks have passed since humanity was nearly wiped out by a virus.  After a time I certainly agree that nature would take back what we - humanity have so laboriously changed but I don't think that a degree of difference would be that notable in the first two months.
As with all of the other books in this series, Purification continues to be filled with erasure.  I am however pleased that Moody has Michael suggest how people were formerly valued is not longer a good standard to live by. As Michael begins to clear away bodies he realizes that the survivors saw the young men as most useful but it turns out that  some of them are inept and that Emma would have been far more capable to act.  This actually makes me very hopeful because far too often in dystopian fantasy, though the world is completely torn apart, things like gender roles remain the same, with women in a passive position and men out saving what is left of the world.  Could Moody's new world lead to greater gender parity between men and women?
Though each book in the Autumn series is short, it never feels like the plot is being rushed. The meta plot keeps moving and shifting easily from character to character.  Each novel we learn a little but more about the survivors and there role in the group. It's almost like watching puzzle pieces coming together.  As I said in my previous reviews of this series, Moody is an excellent writer and a master story teller.  I believe it is impossible to avoid being caught up in the Autumn Series.