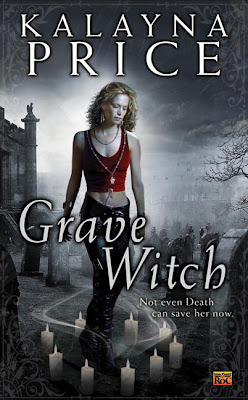 Alexis Craft is a Grave witch, a witch with powers over the dead and their remains. She’s just entering into a ground breaking case where a shade can be used as a witness in court – which promises a much more steady income, a major concern of hers.
Or it was, that was before people started trying to kill her. And curse her. And kidnap her.  Because there’s another case she’s been dragged into – the murder of the governor. A murder that left magical traces on his body that only she seems able to sense. A murder that may be linked to a series of other brutal murders across the city – also with magical signs that are invisible to even the most sensitive witch, but not her.
With her family closely involved with the governor, she also finds herself being dragged back into her family circles despite a long estrangement – and perhaps they’re even more closely involved than she expects. Between family, a murdered ghosts, a mystery gun man, kidnapping fae and a soul consuming curse, she has a lot of pressure to solve this case and precious little allies: only Death who is acting severely out of character, and a police officer she’s just met and has no idea if she can trust.
The plot was fun, well paced and an actual mystery that was mysterious. There were a couple of times I got a little lost because of the size of the world and the sheer number of side characters and suspects, but I did pick it up again quickly. There was a lot going on but it all added to the character, the world and the story as well as the ongoing mystery that wasn’t revealed until the end of the book when things finally came together. I think the culprit was a little out of left field, I didn’t see it coming but nor do I think anyone could – because he was such a minor character that the reaction was less “HIM?! I never saw that!” so much as “Who is that again?”. But the journey was still interesting and kept me glued just to see Alexis fit into her world and try to take the many many elements of this mystery and bring it together
We have a very large world here, the fae were slowly being reduced as technology reason and disbelief took over – so they decided to reveal themselves to humanity. In the sudden surge of belief, the fae grew back to their old levels of power. Not just the fae – but fae lands were opened again, access to faerie and “folded land” opened up, expanding the Earth. They were joined by witches – the wyrd – who seem to have inherent magical talents and can learn more, seemingly at schools and by organisations. We seem to have different courts of the fae, many many different kinds of fae and a whole raft of political and legal issues arising from the fae and the witches. We have death – actually deaths, soul collectors who only Grave Witches can see, bars that lead to fae realms and a plethora of spells and charms on the market.
It’s rich, it’s diverse, it’s complex and there’s a lot of meat to it. The reference to law and politics suggests there’s a lot of behind the scnees world building and we’re not just looking at word dropping “hey let’s include this,” without any real substance – I think there’s a lot of work gone into making this world rich and internally consistent.
I have used “seem” a lot there for a reason – because this book is a tease. This vast, rich world is hinted at repeatedly, used when relevant, but only bits of it are shown. We have a lot of side references, such as reference to the charms people wear, or the fact that they were the 54th state with the newly unfolding land opening up. But little is examined in detail – I’m not even sure what the Wyrd means or is. In some ways it’s a master of “show” not “tell” – we always have enough information to work in the world, we’re never lost, we’re never without information we need to know while at the same time being spared lectures and info dumps.

Yet… it is a tease. I want to see more. This world looks wide and rich and fascinating and I’m only getting crumbs of it. It kept the pacing moving and the information flowing – but we ended with only tasters of an excellent world. I’m hoping the next books in the series will give us the main course after this starter.
Characterwise, I quite like Alexis. She does make some bad decisions, in fact she makes decisions that make me cringe and do edge towards spunkiness. At the same time she’s on a deadline to save her life and the life of others, with limited resources, limited help and a whole lot of hostility. One of her best friends (and major contacts) is unconscious and she’s not sure who else she can trust. In desperate times I expect some reckless decision making. On the face of it, while I didn’t like all her decisions, they were justified in the context.
She can also be abrasive, harsh and biting at times – but, again, never unnecessarily or inappropriately. She is under extreme conditions, has a lot of people treating her like shit and precious little reason to trust the new people in her life and no real reason to be sunshine and roses.
The way she treats her friends was also rather poor in this book. She uses Caleb as a virtual taxi service, Tamara as a magic detector and forgets things that are important to Tamara and Holly. A lot flows to her from her friends and not a lot goes back the other way. But, again, horrible death curse, deadline, have to find the killer before more people die and Alexis’s soul is eaten – she can be excused not making lots of time for friend moments and for drawing on their resources.
I think, ultimately, I like her but it depends on whether this Alexis is the daily Alexis or just the extreme-situations Alexis. If this is daily Alexis? Then she’s probably going to annoy me. Extreme-situation Alexis, then this works.
There is a love triangle beginning in the book - but so far I like it because it’s beginning. Alexis hasn’t seen the guys and thought “oh so hot I love them forever and will now die for you” within 30 minutes of first meeting (something that constantly risks me throwing my kindle against the wall). In fact, she has severe commitment issues and objects most strenuously to the toothbrush being kept in her apartment. She does not melt and become lovely dovey and she fully acknowledges how little she knows about both love interests. True they’re both rather infatuated with her without too much encouragement (though I loved the Death and Coffee scene) but she most certainly isn’t reciprocating on that level. It looks like any relationship is going to be built rather than just flash into existence.
Unfortunately, while there’s a lot of positive to say here, it’s also a book that is pretty much completely erased. And it’s not like it has a small cast of characters – there are a lot of people here and they seem to be all straight and white. At the same time we also have a lot of supernaturals “coming out of the closet” which is always icky and appropriative. We also have a lot of hints about fantasy prejudice – Alexis was rejected by her family because she is a witch. There’s a political party that concentrates on humans, there’s reference to the fae and wyrd being under-represented in government and lots of picketing aimed at the fae and wyrd. It wasn‘t a dominant theme in this book, but it was there, it was fairly pervasive and I imagine it’s going to grow immensely in future books. I’m not a fan of including a fake, fantasy marginalisation while completely removing actual marginalised people.
We do have a look at poverty. Alexis doesn’t have a steady income and is both in debt and close to penniless in this book. She refuses to go to hospital when injured because she doesn’t have insurance and can’t afford the bill. She loses her car and when reassured that the insurance will pay for it, she is disappointed because she couldn’t afford to insure it. Her fridge is empty and she doesn’t have a lot of money to fill it. Even though she’s busy and laying low, she can’t afford to turn down a client. There’s even a moment where it would be very tempting for her to throw money back in the face of someone – but she doesn’t and at least part of that is simply because she doesn’t have the money for that kind of principle. It’s quite a change in a genre where most protagonists seem to have the ever-flowing bank accounts, even when we often don’t see them work.
I would say this book is a very good book and definitely worth a read. But it’s also the seed for a series – from here the character, the world and the relationships can either get a lot better or a lot worse and I’m not sure from this book alone which direction it’s going to take. I’m going to read the next book with a lot of hope, but a little trepidation as well, because it could nose dive dramatically.