Review: Where Angels Fear to Tread by Thomas Sniegoski, Book 3 of the Remy Chandler Series 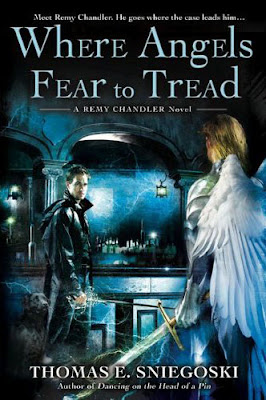 Remy Chandler, private investigator and seraphim, is still in a rut from the death of his wife, fighting both depression and his angelic nature that flares more strongly with his loneliness. Even his friend is beginning to worry about him – and not much worries the veteran cop.

He also has a new case – a man has run off with his daughter without the mother’s consent, and she is desperately worried for her child. More, this child, Zoe, seems capable of seeing the impossible including both the future and Remy’s true nature.

She has a power inside of her, a power that isn’t meant for humanity but is highly desired. Remy is faced with the challenged of finding the child with what erstwhile allies he can gather, while both the soul-consuming seductress Delilah  (yes, of Samson and Delilah) and the long weakened god Dagon both seek the same prize for their own reasons – and that doesn’t include the welfare of the child.

I’ve said before that there’s a lot of research that goes into this series and it really does show. It has a very rich, wide and broad world with a lot of weight to it. Everything is solid, non-contradictory and holds up well and still brings in a vast amount of information and different legends. The introduction of Samson and Delilah was nicely done with their lives after the Biblical legend. It was another level of richness and depth to this world.

It’s also interesting to see the depiction of deity – because it does seem to be the ultimate personification of a righteous – but incredibly harsh and unforgiving god. After all, the plot here revolves so much around Delilah trying to escape her excessively cruel punishment. I am curious where this is going to go – because it does fit very well with what we’ve seen of Remy’s Seraphim side and the other angels. Just, right, powerful, determined to fight evil – and utterly lacking in any kind of mercy, compassion or empathy. Yet, at the same time, the scene with the reclaimers suggests the powers that be have at least some level of compassion. I’m curious and I definitely want to see more and how it fits.

In fact, the world has been expanded generally here with the introduction of other deities (albeit ones under god), other powers and a suggestion that there is a lot more out there beyond the Judeo-Christian style divinity we’ve seen so far. I always like to see a world developing and growing.

Remy Chandler is a complicated character – his angelic nature constantly pushes at him, all the more as weird cases are drawn to him. He is still very much grieving for his dead wife which, in turn, makes his angelic nature – and it’s uncompromising, vengeful attitude – far harder to resist and hold down. He has some strong friendships, but even with them the hole in his life is palpable He is a very rounded and powerful character.

Pacing wise, this book is much better than previous books. We have many different points of view as we can see different people focus in on Zoe and what she has, from Delilah to Dagon to her father to Remy. The multiple plot lines are spaced out and do come together well, none of them drag too long and we’re not bogged down in too much extraneous knowledge, red herrings or unnecessary side tracks. I found the writing much tighter and much more exciting than the previous 2 books. There is still some issues with over-description, I think, especially in fight scenes that can drain some of the sense of movement and action out of the depiction, but otherwise it fits nicely and it wasn’t nearly as frustrating as I’ve found in the past.

The story itself wasn’t unpredictable, but there were enough interesting and fascinating elements – and so many different actors all with their own motivations, their own methods and their own slant on things to make it original and interesting. The destination was something we’ve seen before, but the journey had lots of interesting and new things along the way.

This book does have a very large cast of characters and, sadly, like the previous books it is extremely erased. Everyone was straight and the only POC were in minor roles – and 2 out of 3 of them ended up dead. That was about it, it was pretty depressing.

There are lots of minor female characters, but Remy is pretty much a sole protagonists with relatively minor involvement of anyone else. But the major female inclusion was a worried and desperate mother (all she was) and a dangerous and cunning evil seductress who ate men’s souls. And she’s constantly referred to as “bitch”. It’s not like another insult wouldn’t have worked just as well (“traitor” is one I’d go with.)

This series also seems to have a habit of having magical disabled people and even inherently linking their mystical abilities to their disabilities. We saw it before in Dancing on the Head of a Pin and this book we have an autistic child with divine magic – and that autism magically disappears once the magic does. It presents disability as something unearthly, something mystical. It also presents disability as a cost someone has to pay for power – disability as a downside, the price you must pay.

This series continues to interest me. It has unique, fun elements and strong characterisation. The plots are interesting and exciting, though not the most compelling I’ve read and I’m always happy to pick up the next book in the series. I think it needs a little more zing – partly pacing and, perhaps, partly Remy moving out of his depression, just to bring the books to the next level. They have a lot of great scenes and excitement, but there are peaks and valleys that make it a very good book as opposed to an excellent book.