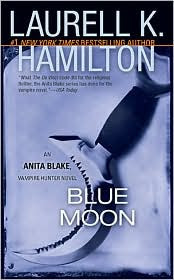 Anita is awakened by a phone call from Richard’s brother – Daniel. Richard has been arrested on charges of rape. Anita is more than a little doubtful of the charges and, naturally, having police and legal connections, she drops everything and makes the flight to Tennessee, despite Jean-Claude’s insecure reservations.

Travelling as a human servant and Lupa is not simple, however, and she quickly finds herself embroiled in local pack politics and in conflict with the local master of the city, who fears and invasion and the power of Jean-Claude’s triumvirate in his territory. Having to dance to werewolf politics and being openly at war with the local vampires complicates things a little.

But then there’s the reason they’re there. Richard has been opposing the sale of land that an endangered troll species inhabits – but the person doing the buying is far more dangerous than he imagined. With his full resources – both mundane and mystical – he is determined to make Anita and Richard leave, but this is a battle they cannot walk away from.

To complicate things further, there’s also Anita’s relationship issues – namely that she left Richard after sleeping with Jean-Claude. Between that and Richard’s exes, there’s a lot of tension to navigate.

The plot is actually really involved and written. We start with a simple mission – to save Richard and find out what’s happening. This quickly escalates not only in to a perplexing mystery (why go to this much effort to evict the trolls?) but then adds a layer of epic to become a fight that Anita simply cannot avoid. As the book says, when evil draws a line in the sand, good can’t just walk away. The depiction of Niley and Linus, their backstory and the books’ descriptive style establishes them as EVIL with a capital E. This lends a strong sense of epic to the story and the sense that there is no way Anita and Richard could just go home and let the trolls get on with it. There’s more depth and strength to it – more hangs on it than a simple local land issue and it gives and extra urgency and power to Anita’s actions and those of her enemies.

The book also continues one of the strength of many of the Anita Blake novels, there are several plots running alongside each other yet, at the same time, linked. We have Verne’s werewolf pack, the vampire and their fear of Jean-Claude, there’s Anita’s regular power hiccoughs – and there’s the core plot, Niley and his nefarious plots and the influence he spreads. All of them run together, they’re all well paced, none dominates the other and they all come together in a really neat fashion. None of them feel like distractions so much as the actual consequences in the supernatural world of moving out of state. It’s not a case of simply focusing on the plot line and the rest of the world conveniently fading into the background (except Anita’s job – which regularly seems to be cancelled at short notice without damaging Anita’s income at all).

I also like the book’s portrayal of police corruption – and how Anita and Richard are both very dependent on both their extensive connections and the fact they have lots of nice, upper class, respectable witnesses to prevent the worst of the Sherriff’s excesses. It’s made clear that these are the only things holding the corrupted police at bay – and also just how much power a crooked sheriff in a small town can actually have.

There is some wonderful conflict about Anita’s mortality explored here, the lines she feels she has to cross, the limits she removes for the sake of protecting the people she cares about. The moment is not treated lightly, it’s fully given the full horror and gravity it deserves. And, when it finishes, we can see how it has changed Anita, how cold and hard and disconnected it made her, how it literally broke a piece inside of her. It was not only one of the best scenes I’ve read in the series, it’s one of the best scenes I’ve read in any series.

Her moral questioning is an ongoing theme in the book that is very powerful. When she does what has to be done repeatedly, she questions not only whether she is a good person, but also whether she is even human and whether he can be a good person. With her vampire marks and, of course, her Necromancy giving her powers above and beyond what she imagined – can she include herself among humanity? And how many people can she kill – even torture – and still remain in the good graces of heaven?

It’s almost a shame to go from this to the relationship drama that inevitably appears in this book. Yet, the relationship drama is reasonable and no-one acts unreasonably, well, not by the standard of later books. Jean-Claude has reason to be insecure about Anita dropping everything to rescue her ex. Richard clearly has feelings for Anita still and, while I cannot remotely be comfortable with him pushing her when she clearly doesn’t want to be pushed, there is a foundation for a relationship there – though he needs to back off. I was interested in the idea of them both seeing other people (at least, I would be if it didn’t involve so much self-destructive jealousy) but that was torpedoed in the end.

In general the relationship issues, while not my favourite thing, are relatively reasonable with a bit of skeevy seasoning. The sex however?

This is the book where Anita finally has sex with Richard. And, as I’ve discussed before, it’s bad bad bad, awful, bad. Raina’s Munin has control of Anita and decides to invoke a werewolf rite that involves her running while all the male werewolves chase her down to try and rape her. She cowers and hides while the men fight each other, sometimes to the death, in order to reach her. At the end of the chase she is losing time, unable to think, unable to hold her gun any more, she mystically needs sex that much – this is their first time together. And, yet again, Anita does not consent.

Similarly, Anita and other women raise their head again in this book. First of all, the whole reason for Anita  going to Tennessee is to rescue Richard who has been falsely accused of rape, an unpleasant trope to begin, especially when their lawyer’s tactics are “let’s bring up all her past sexual partners!”. Of course, the woman in question, Betty, is evil, ”wanton” and gets eaten by a demon – especially bad since her soul is in jeopardy.

Richard has been a busy boy so has plenty of other lovers. We have Lucy who Anita hates and who returns the sentiment – up to and including violence and Carrie who Anita tried to hate, but she was crying pathetically, so is lower enough down the rungs to be spared the hate. Then we have Mira - evil women who betrayed Nathaniel  - using her wicked wanton sex no less! And then was killed.  Roxanne isn’t one of Richard’s lovers but, guess what? She and Anita don’t get on and end up fighting.

That leaves Richard’s mother (hardly there, argument and arguing with Richard over his relationship with her) and Marianne. At last, a woman Anita kind of respects, mainly because Anita throws lots of suspicion at her constantly and Marianna just takes it. But, it’s ok, Anita reminds us every 5 seconds about her weak heart and how she’s prey and, of course, she needs a bodyguard to even hang out with the pack – so much weaker than Anita.

Racially, this book is highly erased – but at the same time it mentions this and acknowledges it. Jamil even talks about how he’s one of only 2 Black men in the area and that it’s impossible for him to even try to fit in or be unnoticed, with distinct tones of frustration. It’s not a lot, but there is an undercurrent of the precious Jamil and Shang-Da face as open POC in a massively white area – but it’s a passing mention at most.

On the GBLT front we have Asher pining after Anita (and Anita forgetting his bisexuality) and yet another gay villain. A demonically evil gay villain who likes to rape his straight captives – needless to say I am not impressed.

In general I enjoyed the book and it had some amazingly powerful scenes. Anita’s morality debate, the richness of the world with its vampire politics and the consequences of travel,  the epic show down against a force of literally pure evil thrown in with some truly excellent scenes make for a compelling, exciting and fascinating read. Unfortunately it is let down by some majorly problematic issues and Anita’s personal life is slowly swelling to affect the plot.