Review: Thirteen by Kelley Armstrong, Book 13 of the Otherworld Series 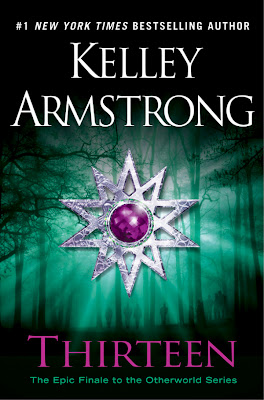 After the events of the last book, the supernatural world is devolving into chaos. Split along the lines of those who want to reveal the supernatural and those who wish to remain concealed, there is a war fighting on every plane of existence. Not just Earth, Angels are turning against Angels, Lord Demons are mustering against each other. In the confusion, all rules are being broken, demon beasts are manifesting in the real world, Angels are taking flesh, demi-demons are possessing humans, even children, against all established laws and treaties.

People are panicking, in one move against the reveal movement, a group of anti-revealers are taking extreme measures to convince people it’s a bad idea – unleashing drugged, frenzied werewolves, manifested demons and starving vampires among groups of humans to show how bad it could be – leaving a horrendous mess and piles of bodies in their wake.

And Giles, leader of the reveal movement, is getting desperate. Harried by the Cabals, the anti-reveal movement, the interracial council and with his laboratory destroyed in a explosion, he is losing control. He tries to tighten his fist on defectors and to wave his carrot of immortality – but his serum isn’t ready – and the people who take it are becoming savage monsters. It doesn’t stop him trying to use it widely among the potentially influential.

Then there’s the Lord Demons – who are quite willing to possess without summoning, recruiting, looking for their offspring – and setting Cabals into civil war.

That sums up this book – everything is falling apart and all the rules are being broken – and it’s so excellently well done. Between the Lord demons and the Cabal squabbling and random possession and demon beasts, they run from event to event with each and every one of them being something that SHOULD NOT BE. We get a really strong sense of both the desperation and the sheer uniqueness of how completely wrong everything is.

It’s really well done that they balance these 2 elements really well. Despite the Cabal bickering and the sheer surprise of what they’re facing, when the powers that be get their act together they’re effective and have plenty of resources to counter this threat. But, at the same time, Giles’s desperation becomes the threat as he is driven to more and more extreme levels. The whole thing ratchets up the tension wonderfully and adds to the excitement.

It’s also old home week. Elena, Paige, Savannah, Hope, Jaime, Eve are all in this book, all take a turn at the reigns. I would have liked more Paige (after Jaime, she’s my favourite), but it was still nice to see everyone gathered and the growth from several of them. Elena now firmly setting herself up as Alpha elect and making it highly believable (I am sad that the rest of the expanded pack aren’t presents since I wanted to see more of that from Frostbitten). Jaime more settled into her role and niche. Eve more balanced in her place as an Angel – and her manifesting was excellent and added another awesome element.

In all, it was all our favourite characters, all gathered for a fast paced, epic story full of drama, tension and excitement.

The only thing I think that could have improved the tension a bit more was some death. Yes I know, it’s odd to wish for more death and I’m not going to spoil the violence and destruction that happened – but if you’ve got a desperate fight for survival, an out of control war and Lord Demons popping up left right and centre then casualties are not unexpected and add a lot of tension.

The only thing that derailed this epic confrontation, for me, was Savannah and Adam’s relationship. It feels like, since this is the last book in the series (alas, and yes I am sad about that), that every female protagonist had to be given her Happy Ever After love interest. To me the relationship felt rushed – I can see Adam reacting  when Savannah was presumed dead – but it felt like the world is falling apart and Savannah and Adam are squeezing in relationship issues. At least say “yes there’s something here, let’s shelve it” but it kept coming up. It didn’t dominate, but it was there and it felt out of place.

The thing is, I’m not sure Savannah needed the love interest – especially since everyone else had been paired off. Or if they did have the love interest, it could have been developed at a later date when the world wasn’t ending. With it being the last book and everyone so elegantly paired off it felt a little like everyone needs a happily ever after – and that HEA MUST include a male love interest and even a woman in her early 20s needs to be in a long term relationship for us to believe she can have a HEA. Her story isn’t “finished” unless she’s got a man and a long term relationship.

I’m pretty amused that the constant peril the female characters face in this series is constantly being lamp-shaded now – with Savannah joking about whether she or Jaime is the most kidnapped supernatural (really, Elena and Hope are giving them a run for their money).  And in this book Savannah was captured – sorry, arrested – Hope was kidnapped (AGAIN) – women in peril is such a recurring theme in this series. Now, a lot of the time the women can get themselves out of peril to some degree, but Jaime should be Houdini by now, the amount of experience she should have with being kidnapped and tied up.

This is the last book in the Otherworld series, at least for a while. And I think it ended on a high note, with all the characters being set in their lives without a declaration of world peace and stability – there standard lives will be ones of excitement and adventure, as it should be. I am deeply sad this series has ended, it was one of my favourites, it ended epicly and I just hope Kelley Armstrong will dust off this world and use it again.