Review: Dancing on the Head of a Pin by Thomas E. Sniegoski, Book 2 of the Remy Chandler Series 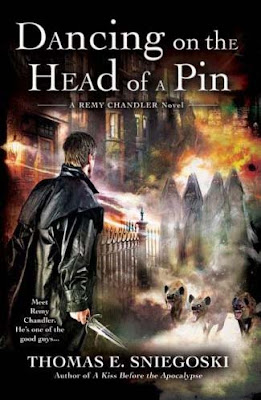 But the world doesn’t stop for a grieving angel. Several weapons have gone missing – weapons from every stage in history, each the very epitome of their kind and craftsmanship. They are the pitiless and they have power far beyond being devastating tools of destruction.

And other people certainly want them - not least of which the Denizens, fallen angels who have returned to Earth from Hell to live out the rest of their penance and seek redemption. They’ve absorbed the forces of Hell and aren’t seeking a path back to Heaven – but revel in the corruption of mortals around them.

But the Pitiless contain power even they don’t know – and are part of a scheme that can rock Heaven itself to its core.

I do have an issue with the pacing of the book. It takes a long time for the book to get going and a long time to set the actual plot and premise up. We spend a lot of time with Remy’s emotions and dealing with his wife’s death and considering his place in the world – and whether he truly wants to remain with humanity or re-ascend to heaven. There follows a series of side-characters he deals with to find the pitiless who serve no real purpose at all. I’m not sure why the Denizens were there or what purpose they served or the semi-human purveyors of stolen goods. They seemed almost place holders that could have been equally filled by anyone else. They felt like fillers, interactions with them felt unnecessary and all it really did was mean Remy didn’t have to do any real investigating.

The contrast is that once he does get his hands on the actual Pitiless, it’s run and keep up, no sprint and keep up with action left right and centre, passing into hell, fighting through Tartarus against hellions, against the fallen and we’re up to our eyeballs in gore, scary feelings and big rebellious falling angels.

It was a little disjointing to say the least. I vaguely felt like I’d plodded to the top of a hill then fell down the other side.

But other than pacing the story was pretty good. It was an adventure – I wouldn’t say much of an investigation since the action came to find Remy rather than him tracking down the clues. But the way the nature of the Pitiless unfolded and the epic way the whole confrontation was set up was extremely well done – form Francis battling in the portal to Remy fighting to get and keep the pitiless there was a full sense of epic that was established. But then it was just battle after battle. Buuut some of the fights were unnecessary. Some of the hellion attacks, battling the denizens, Uriel – it just felt like another fight scene without any real purpose. Just throwing in random stuff to fight time and again, even when the scenes are well written, gets a little dull after a while. Books aren’t action movies, you can’t get by with cool fight scenes to keep things going. It also got me lost, after fight scene after fight scene after fight scene I was a little “so what we fighting now? Why? What were we actually doing again? Aw, screw it, stab something already”.

Yet, despite the epic set up, the ending wasn’t predictable, it had a couple of twists I never imagined and caught me by surprise and I definitely didn’t see the big show down at the end – I thought we’d have an entirely different conclusion.

The world setting here is excellent. The different orders of angels, Tartarus, the nomads, the guardians, the whole extremely well researched lay out has a lot of depth and there’s been a whole lot of work gone into it. From the Thrones to the vividly described Tartarus there’s a whole lot there.

Unfortunately, Remy is in a perpetual state of grief. His grief is not unfounded – not by any stretch. In the first book his wife of many years was dying and in the second book she was dead. But it does mean we’ve never met Remy when he wasn’t overcome with grief which makes it quite hard to identify with him. When he’s not grieving about his wife he’s angsting about the state of the divine and his decision to leave Heaven. He’s a very heavy character, very laden with issues and rather serious. It’s exacerbated by the fact that it is very much a one character book. There are other characters – there’s his friend Mulvehill and his dog Marlowe and the various characters that are part of his current plot but they’re all minor characters or characters that serve only to advance the plot. There’s no counter message to Remy’s constant heavy seriousness. I’m tired of the moping – it’s not unjustified moping, but it’s still moping. And if he’s going to do all this moping, he could have spared some moping for Francis. Francis was due at least a little mope.

Inclusionwise there wasn’t a lot in terms of race and sexuality. We did have some disabled characters – both the descendants of humans and Denizens who often have powers as well as a disability and a suicidal paraplegic whose repeated brushes with death gave him the sight. It didn’t help they were all villains and that “disabled person with magic” is not an unknown trope

All in all it was a good book and clearly setting up more. But it was a book that could have been much shorter than it was. The story itself was short – but between the very long very detailed and very many fight scenes and Remy’s own emotional rollercoaster it felt a little dragged out. It almost felt like a computer game with too many random encounters – you're following the story but before you get there you have to fight all this random stuff along the road – it wasn’t all necessary.