Review of Violet Tendencies by Jaye Wells Book 4.1 of The Sabina Kane Series 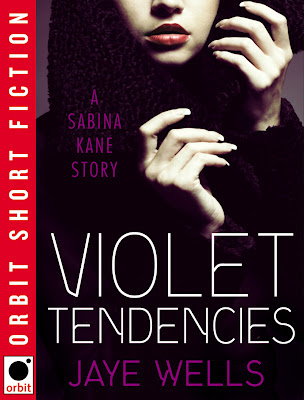 Normally, I skip short stories in any series that I read but because I have become such a fan of Jaye Wells, problematic elements not withstanding, I simply had to read Violet Tendencies.  Adam, Sabina, Giguhl and his vanity demon lover Valva have arrived in Los Angelos to search for Sabina's missing sister Maise.  Sabina is hoping to sneak into town unnoticed so she arrives at Fang's vampire bar, with the hope that he will put her up for a few days.  Fangs is hesitant because if the Dominae discover that he  has given them sanctuary it could mean death for him.  Sabina promises that he will keep mum about his involvement; however, she is unable to keep a her appearance low profile because Valva has other ideas.
Valva hopes on a stripper pole and all hell breaks loose.  Before Sabina or Adam can react the vampire strippers are throwing punches, and the bar is on fire.  Realizing that the situation is out of control, Ada zaps them out of there leaving the bar on fire, as the Dominae's guards enter and demand their surrender.  He shifts them to the famous Hollywood sign where Giguhl makes it clear to Valva that his woman is not to behave like a cheap tart in public.
Valva begins with lip pouting but when he realizes that Giguhl sees her as a possession to be owned, Valva makes it clear that she will shake her ass when and where she wants regardless of how she feels about it.  Despite being a minion, Valva is not only tired of Giguhl but of Sabina, who orders her around.   Valva feel unappreciated and so decides to leave, which shocks them all after declaring that Sabina has split ends.
Violet Tendencies is yet another installment of the all White, all straight world that Wells has created, but it is laugh out loud funny.  How can you take a vanity demon, whose cover animal is a peacock into a strip bar and not expect her to show her stuff.  Reading as she body surfed through the crowd as Sabina, Adam and Giguhl desperately tried to keep up had me laughing out loud.  As for our favourite demon/cat Giguhl, when he wasn't be a sexist ass, he was absolutely hilarious.  The break up with Valva may well lead to hour of chick flicks but somehow he will survive.
I liked that Sabina was forced to recognize in this story that she does have a tendency to boss people around.  Just minutes after Valva leaves, she attempts to give orders to Giguhl and Adam, who pause and raise their eyebrows at her, causing her to add the word please to her vocabulary.
If anything this short story makes me desperate for the next book in this series.  There can never be too much Giguhl and the interactions of the threesome really is wonderful.  Wells is incredibly funny, which makes her story a pleasure to read.  If I have one complaint with Violet Tendencies, it would be that it was too short.  In the words of Giguhl, "I have needs," and this short story was a tease.  I hope that Wells is at her computer typing furiously, as I am dying to know what comes next.