Midnight in St. Petersburg by Barbara J Web: Book One in The Invisible War 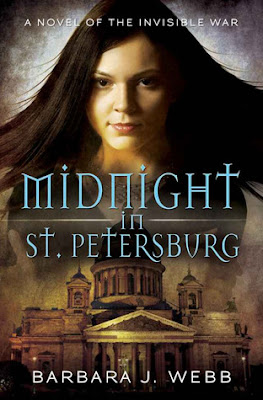 A vampire, a sensitive, a templar knight and a fae descendant, are all called to St. Petersburg.  It sounds like the opening line of a joke doesn't it?  Well, in this case it's a very serious matter.  Something is desperately wrong with the city and Rose, the sensitive, can feel the blackness in every waking hour.  They are offered a contract by an unnamed employer, to discover who is responsible for the murders.  For Rose, this represents the opportunity of a lifetime, because not only will she finally be in the company of people who understand her, this deal represents more money than she ever thought possible.  Unfortunately for Rose, none of her fellow teammates have any trust that she is up for the fight.  Everyone seems to have secrets except for Rose, and no one is anxious to share.
Things escalate as Rose is attacked in her dreams.  The tension between Mike the templar and Nazeem the vampire continue to stymie any possibility of trust between the group.  As a servant of God, Mike sees Nazeem as unholy, and therefore beyond redemption.  Nazeem, for his part, only wants the opportunity to help and despite himself, he is attracted to Rose. Ian, the fae descendant, only took the job to discover what happened to his long missing father and while he is excited to be there, this is clearly his priority.
The supernatural community is in an uproar because no one can tell for sure who is next to die.  It could be a voider, or even a vampire, but what is certain, is that in just a few days, someone else is scheduled to die.  Can the ragtag team get it together long enough to hunt down the evil, while negotiating the various politics at play?
First, let me say that it is refreshing to read an urban fantasy novel outside of a North American setting. One could almost feel the cold, and bleakness of St. Petersburg as Rose wraps herself in as many layers as possible. Web also used food, as a way to give the reader a sense of the setting.  It felt authentic and that is something a lot of writers have problems with.
The only character of colour in the novel is Nazeem, but we don't really learn much about him from a cultural standpoint; however, we do learn about vampire culture through him.  He is yet another in a long list of what I would call self loathing vampires.  On the outside, he seems to accept himself for who and what he is and yet, he seems to be seeking redemption, which implies that he is not completely accepting of himself, or of other vampires for that matter. In a moment of passion, Nazeem kissed Rose and when she told him to stop, he did so immediately.  I really liked that Webb included this scene as far too often, a woman in an urban fantasy novel is swept away by an otherworldly creature when there is much evidence that she should be running the other way.  I liked that Nazeem did not force the issue, which helped to assert Rose's agency and her right to say no.  Too often in these novels, no means yes and to see the opposite affirmed is really important.

There are no GLBT characters in this novel and while erasure is commonplace, it is not acceptable.  There is no reason that Ian for instance, could not have been a gay man.
Much of this novel dealt with the effect of the now defunct U.S.S.R., and what it is was like to live under a totalitarian regime. The oppression of religious beliefs factored largely in this story. There was also a discussion of the KGB and their methods of torture.  One had to be smart to survive in this world and betrayal was always a possibility.  Midnight in St. Petersburg suggests that just because the old world order is now defunct, does not mean that capitalism and supposed freedom has changed the game at play.  The invisible war between the so-called forces of evil (read: vampires and fae) continues unabated.
At times, it felt like the characters were just stumbling around with no sense of direction and this lagged the story.  By the time it came to its conclusion, I was more than happy to be done.  It didn't help that instead of having real inclusion that Web relied on a large supernatural world. This is something that has become far to common in urban fantasy.
Rose, the sensitive, was downright grating.  Yes, it is positive that she stood up for herself, but much of the time it read like someone yelling and flouting authority for the purposes of being difficult.  Mike, Ian and Azeem all had more experience than her, and while discounting her skills was not acceptable, neither was her response.  Much of the time, I felt myself wanting to gag her. She is the typical avatar of what we here at Fangs for the Fantasy would describe as a spunky agent, with a little bit of Kellie Independence thrown in for extra seasoning. When she was brought back from death, I found myself thinking damn it.
There were a few line editing issue with this book,  and a scene at the end which was absolutely repetitive, but I didn't find it distracting. I only bring it up for those purists who get in a tizzy over these things.  If I had only one word to describe Midnight in St. Petersburg, it would be potential.  This series is absolutely going somewhere and now that the world building has been completed, I suspect that the next book will be absolutely fabulous.  I want to see what happens with the Fae God and now that the team has some cohesion, I suspect that many of the ridiculous spats, which were really an annoyance, will no longer happen. This is most definitely a series that bears continuing.