The Almighty Johnsons Season One, Episode Two: This Is Where Duty Starts 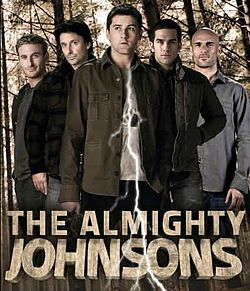 So when we last left the Johnson family, Mike and Valerie were trying to  were trying to conceive a child through IVF and Axl had been informed that his quest is to find the goddess Frigg, in order to become a full God.  It seems that even if you are a God, things don't always go as planned.
Mike and Valerie learn that their second attempt at IVF has failed.  While the doctor is talking to them, Mike zones out and imagines the doctor telling him that his God sperm is not compatible with human sperm and this is why Valerie is not getting pregnant.  He blames himself entirely.  We get a flashback to when Mike was 21 and first a God.  It seems that Valerie didn't start off as his girlfriend's but his best friend Rob, who incidentally is in a coma.
They get a call to come to the hospital and learn that Rob's condition has changed.  Every once and awhile a tear rolls down his face, but more importantly he seems to be speaking ancient Norse, the very same language that Olaf did when he zoned out during Axl's entry into his Godhood rights. This disturbs Mike greatly.
In the meantime, Anders is not at all content to allow nature to take its course and has decided that despite Mike's directive that he must get Axl laid.  Axl says that he is interested in someone, but Anders tells him to just have sex with her and find out whether or not she is Frigg and then move on.  Because the lives of all of the brothers are dependent upon Axl finding Frigg before he dies, Anders is not prepared to wait.
At his office, he looks through model catalogs because he has determined that Frigg must be a model since she is a God. He centers in on an attractive athlete named Carla, in part because she posed for a picture exposing her breasts.What he does not know, is that Stacey, the Goddess Hel has infiltrated his office to keep track of what the Gods are doing.  She quickly reports back to Agnetha (the Goddess Freyja) about what is going on.  They are quite dismissive of Anders reasoning and make a point of saying that he is not the brightest of Gods. Agnetha decides to beat them at their own game by getting by having Ingrid (who is Snorta the Goddess of Wisdom and Prudence) work on a genealogy to figure out who Frigg really is.
In the meantime, Axl has a date with a friend of Gaia's.  Things go really well, though she makes it clear that he will not be sinking the pink.  She asks him on a second date to which he happily agrees.  Things are  set to go until Anders shows up with a plan to get Axl laid with Carla.  Though Axl is intimated, because he is a 21 year old virgin, Anders promises that with him as his wing man everything will be okay.  Axl cancels his date and shows up at the game to be a replacement for the mascot, who broke his foot.  A fight breaks out between the two mascots and at home watching is Ty who very quickly calls Mike and Olaf.
Axl heads back to Anders where he proceeds to have sex with the young woman after she has had quite a bit to drink.  In the living room, Mike and Anders are arguing over this course of action.  Mike is extremely worried about the repercussions of this action.  When Axl orgasms Carla passes out and he runs into the living room screaming believing that he has killed her.  The brothers rush into the room and despite shaking her, Carla does not wake.  Finally, someone suggests that Ty touch her with his cold hands to give her a shock.  Carla wakes up with the brothers looking at her and is not happy. Axl leaves with Mike and on the way home, Mike again warns him that when people get involved with Gods, there is always a consequence. In telling Axl why he should be careful, we get another flashback scene.
It seems that when Mike was 21 he was playing pool and of course being a God, he couldn't lose.  He kept taunting people to play against him and when two bikers took up the challenge, Rob urged him to throw the game, but Mike didn't listen.  After winning, he again taunted the bikers and suggested the should drop their pants.  They became violent and Mike was throw on top of the pool table with the back of his head slamming against one of those balls.  He apparently has been in a coma ever since.
When Axl enters his apartment he finds that his roommate and her friend are waiting for him. It seems that they attended the game unbeknownst to him to support him and some him leaving with the athlete. He tries to claim that it wasn't what it looked like, but she simply tells him that she is not interested in players and leaves.
Okay, it's official, this show is growing on me.  I still am not sure about what race Gaia is and the show is still largely White.  There are still no GLBT people.  I was not happy with the lack of acknowledgement of rape.  If Anders was manipulating her and plying her with booze, her ability to consent simply was not present.  I was disappointed that Mike did not make it clear to Axl that this is what he had done.  Just saying that there are consequences for people who get involved with Gods, does not call out sexual assault as wrong.  Still, it will be interesting to see where this show goes now and how Axl will negotiate his morals to achieve the end of his quest.  On some level he knew what he was doing was wrong, but he still allowed himself to led.