Review: Eat, Slay, Love by Jesse Petersen, Book 3 of the Living with the Dead Series 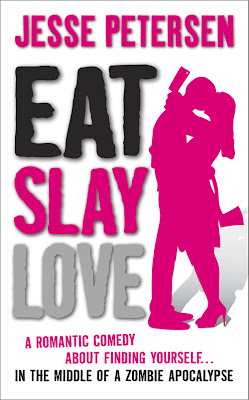 Sarah and Dave are heading towards the rumoured Midwest wall; with the cure for being a zombie in their pocket. Quite literally a test-tube that could save the country, possibly the world

David, meanwhile, is changing. Since he was bitten by a zombie and cured, he hasn’t been quite human. And while this comes with certain advantages, it also comes with a whole lot of worries.

Not least of which is trying to keep it – and a secret – from their new companions. The aging, perpetually stoned rocker isn’t a problem. But Nicole trained journalist and stalkerazzi, well she’s a much more difficult challenge – she doesn’t miss much and she even carries a video camera around with them

And it’s not as if the trip across the US After Zombies is easy anyway – with wrecked  roads, lack of supplies, constant threat of attack and, of course, other survivors carving their own lethal kingdoms out of the badlands, it’s a difficult journey to say the least. Then, when they reach their destination, absolutely nothing is what they expected.

World wise I am still impressed by how this book is balanced. With any kind of zombie apocalypse movie there is going to be scenes of tragedy, of fear and of sheer massive horror. And this book includes that, thoughts of people who are lost, of things they’ve had to do. Moments of fear, if not panic any more (simply because Sarah and Dave are far too experienced and well trained now for panic).

We also have the standard examples of how humanity devolves in these situations. Petty despots, cults, preying on weaker people, draconian cruelty and tyranny. And when you put them all together along with the desperate fight for survival and craving of sugar, you often get a rather bleak book.

And this book has those elements – there are those bleak moments. But it’s also funny. It’s also light hearted. Sarah and Dave, in the midst of all this horror, manage to have fun. It provides some excellent balance and keeps the book a light, happy read. Even with zombies.

We also have much more development of the world including what has happened with the last of the government. It’s a nice twist that makes perfect sense considering what has happened to the country – I still didn’t see it coming and it adds a whole new dimension of depth

On the character front, like in the last book, we have a jealousy subplot which put me off for a while since it’s both being done and wasn’t very appealing to me the first time round either. What comforts me about both plots though is that at least neither Sarah nor Dave are ever tempted to actually stray and lead us away from glorious zombie killing story and into fraught relationship drama story. I mean the whole premise of the books is that the zombie apocalypse brought this warring couple back together – to have it broken up again would have been really depressing

Which brings me to Sarah’s towering moment of awesome. I didn’t see this coming – in fact I was getting worried. With Dave developing more and more super powers I was worried that Sarah would be relegated to side kick, or chronicler of Dave’s marvellous adventures.  He’d do the amazing things and she would stand around gasping in awe at his impressiveness. But no, Sarah not only held her own but went well above and beyond what was expected in spectacular, dramatic fashion.

I am not sure what the point of McCray was. Comic relief? Not sure, I didn’t find him overly funny or necessary.

Needless to say, Sarah is a strong, capable character as she has been throughout the series. She is an equal decision maker, she is beyond capable, she is clever, she is never second and she bounces off everyone around her extremely well. But she’s also joined by a series of other strong female characters in this book – the ruthless and tenacious Nicole and the determined and adaptable Kathleen, leader of the resistance. It’s an impressive collection and, barring some jealousy sniping between Sarah and Nicole they do end up working well together.

The thing I didn’t appreciate is the repeated slut shaming of Nicole because she was willing to use sex as a tool. Yes she exchanged sex for information – it’s sex, it’s not due an “ew” from Dave and Sarah, what are they, 10? Also, inclusivity wise, sadly, the book isn’t appreciably better than the ones that came before.

In general, this book is another great addition to a great series. The characters are wonderful and fun, the balance between incredible horror and lashings of snarky humour is done just right. There’s a meta plot to keep going beyond mere survival (which can get old as a story) and, best of all, there’s great scope for a fourth book. I also love that while characters may come and go, ultimately it’s back to these 2 and their lives. And I just can’t wait to see where we go from here