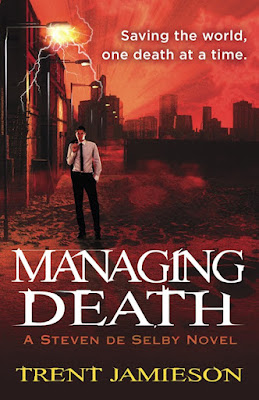 Steven de Selby is the newest RM of Mortmax industries, member of the Orcus and avatar of death for the whole of Australia.

And that’s not an easy job. It’s especially not an easy job when you have lost as many people as he has and are still reeling from the shock of a near regional apocalypse.  Now he has powers he barely understands, duties he understands even less and none of it is something he wanted or asked for. Worse, the other RMs are all ruthless murderers who reached their position by climbing over the bodies of their predecessors and he has to deal with them.

The Stirrer god also draws closer – a being that could herald the end of all life itself; but before he can even think about dealing with it he has to bring all the RMs together in a Death Moot to discuss strategy.

But they’re playing their own game. They have a long term plan that involves him – but he’s not part of it. And as he’s dragged into it by Suzanne, RM for North America, he also learns far more about what it means to be an RM and the Hungry Death that lurks inside all of them; even as the association damages his relationship with Lissa.

And then there’s Rillman an ex-employee of Mr. D’s who left under bad terms. In fact he wants to kill Steven as slowly and painfully as possible, and the other RMs and quite possibly destroy death itself. This could be a Bad thing. Especially since it seems he just might be able to do it.

In the first book Steven spends a lot of time flailing around, lost, confused and utterly overwhelmed

In the second book, Steven spends most of the time flailing around, lost, confused and utterly overwhelmed. Yes, again. The difference is that he’s has been doing this job for 3 months now and he’s still flailing around ineptly. In fact, by the end of the book I still had zero idea what a Regional Manager of death actually DID except exist, have birds spy on his girlfriend and have lots of discussions with other Regional Managers. Lissa and Tim intervention him about slacking off and doing nothing but after that he doesn’t seem to do anything differently.

Yes he has suffered losses – but so have Lissa and Tim. And they’re moving on, putting in double shifts to keep the organisation going while he drowns himself in rum and sleeps in (despite not needing to sleep). He has these new shiny powers but he doesn’t know how to use them. He makes little to no effort to learn about them and no effort to practice the few powers he does know. He has Mr. D to act as guide and advisor but he has to be virtually dragged to his presence to get any advice or training. He knows Aunt Nettie is angry with him but he makes no attempt to reconcile – instead preferring to avoid her. The only reason he learns anything about his job, his powers, the company’s history or anything else is because Suzanne the North American RM pushes him into a deal that forces him to spend time listening to her train him.

When Rillman shows up he makes no effort to track him down, waiting for Rillman to come to him again and again and again. It’s not that he can’t find him, he just doesn’t make any real effort to do so – relying on fragile mortal bodyguards and his own resilience as an RM to sort everything out. He rages about the Stirrer God with constant “someone has to do something” but doesn’t actually do something or propose anything (which would work out as a generic

Steven de Selby doesn’t drive this story, the story is something that happens to him and he desperately tries to react to. Which fit the story of the first book – but in the second book just makes him considerably less likeable and a lot more frustrating. It’s not until very near the end of the book that he actually does anything  - and even then that’s because the plot of the other RMs has finally come to fruition and literally possessed him to make him do something.

Similarly, because of the lack of character action or exploration, we don’t get much development of the world. Which is a shame because the history is fascinating, the Hungry death, the death of the Sea, the past and origins of the Orcus and the various RMs. How that origin has since shaped the RMs and how that makes the Hungry Dead a threat again. And the recognised Entities – what are they, where did they come from – who is Aunt Neti, how are they created?

Storywise, despite not being character driven, it is interesting. We have a lot of action that is well written and flows. The ultimate plan of the RMs both made sense and was completely unexpected. I loved it, it was crafty and fully drew on the depth of the world and the history that had been revealed. The characters were nuanced and deep, neither the backstabbing evil they had been presented but nor were they saints by any stretch of the word. The information about the world was delivered in a realistic, natural and well paced fashion. It is also one of those books where you know the author knows the setting - Brisbane feels extremely real and natural (well, insofar as someone who has never been to Australia can tell)

But the rest of the story was not well paced. We have a lot of Steven not doing anything but moping about the job and the past, worrying about his love life and generally just sat around not doing much, interspaced with (admittedly well written) action scenes where defends himself from attack before sinking back into his rut. It’s not so much dull as it is frustrating.

I do have a problem with the big bad – because I don’t think he is nuanced like the rest of the Orcus. He’s bad. And his motivations for being bad (jealousy of Steve’s successful Orpheus Manoeuvre) seems pretty shallow and empty for the sheer level of hatred and enmity he holds. I can get himk being angry, I can even understand him wanting to bring down the Orcus and I can accept that he has an unexplained diabolical plan. I can understand him hating Mr. D.  I cannot accept that he, personally, loathes Steven de Selby that much for that little reason. It made the whole Rillman plotline feel faintly contrived. I’d have preferred more information on his diabolical plan AND the Orcus’s diabolical plan to make it all fit better.

Inclusionwise I think two of the RMs are POC (we see them for about 3 seconds). And that’s about it. Also I raise huge questions why there are 13 Regional Managers and both New Zealand and Britain get 1 each, but the whole of Africa makes do with 3, 1 covers the entirety of North America and 1 covers China. Considering population and death rates, this does not seem like a sensible allocation of resources.

The ending is epic. It’s well done, it’s dramatic, it’s turn-the-pages-quickly exciting and after a book load of nothing happening and nothing been developed it’s almost cathartic to see Steven come into this power and truly grow into the role and set Rillman firmly in his place. It did a lot to help the book – but there’s a limit to how much an epic ending can save a slow book. It’s a credit to the ending and the general story and world that I rate this book as highly as I have, Without these excellent points, the main character would have dragged this very far down.