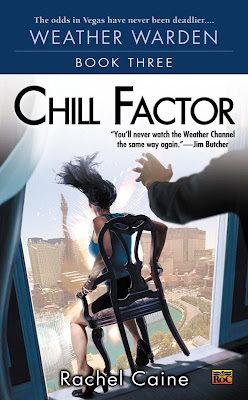 Joanne and David are trying desperately to catch up with Kevin and Jonathon – Kevin has stolen Lewis’s powers, the most powerful Warden in the world and without them Lewis is slowly dying. And Jonathon is the most powerful of the Djinn, bottled for Kevin to use. Between them they have vast power and the potential for extreme destruction – especially since they’re extremely careless how they use that power. The growing instability is threatening a global environmental disaster.

Then there’s the organisations that shape the world who are determined to become involved. The Wardens want David and Jonathon’s bottles, Lewis playing his own game and a new force, Ma’at, sees the Wardens as a deadly threat – but has little compassion for humanity.

It’s been a long time since she has been in Vegas as well – but the place holds terrible memories for her of events that are very much connected to the current crisis – and the growing number of missing Djinn.

I’ll start with fulsome praise for the World Building. The world building and research is impressive but, again, perhaps too impressive. It’s not as extreme as the last book, but I’m not a meteorologist (or a seismologist for that matter) and while the science is well explained, there’s a lot of it. It’s nice to see magic have a grounding in reality, but at times I think I’d be happier with “she waves her hands and it rains” than the scientific chain of events that causes air born moisture to form precipitation. It’s impressive, but perhaps too much for the lay reader.

Beyond the world building of the magic, the Djinn, Ma’at and Wardens are all coming together with more detail and more information about each of them and how they interact together – and in turn adding a lot more information to the magic system and the way the powers actually work. It’s artfully done without ever resorting to lecturing even if Joanne’s point of view about weather manipulation can be excessively complicated and detailed.

The story is fascinating – all these organisations, the dilemma of taking down Kevin, how Kevin himself is not an entirely unsympathetic character, Jonathon’s own plotting and Joanne trying to negotiate between these many different forces and powers – and choosing who to trust. We have the very struggle of getting near Vegas with the most powerful Djinn in the world trying to brush you aside; the complex ethics of what to actually do with Kevin; the need to save Lewis while at the same time dealing with his and the Warden’s behaviour and, through all that, the presence of Ma’at, their own agenda, their demand that Joanne joins them and their own shady ethics. There’s a lot here, a lot of twists and turns and several times just when you think it’s all ironed out, a new curve ball lurches out to surprise you. It’s well paced and interesting never dragging but I do have to say there may be one twist too many – towards the end of the book I reached a point where I just wanted her to win already and be done because there was so many new twists added on at the end.

I’m really curious how Joanne reacts to the people around her from here. So much has opened up – the true nature of the Wardens, Ma’at, the Djinn, Lewis, yet at the same time she has been given zero reason to trust any of them. In fact, each of them has betrayed her in some fashion, sometimes pretty severely. Where does she go here when she has little reason to trust or want to be part of any of these groups?

I think it says a lot for the quality of the characterisations that you can feel emotionally connected to a character. So as Joanne was repeatedly betrayed, I felt like cheering when she seemed to turn her back on all of them. When you root for a character, feel angry and outraged on a character’s behalf then that is a really well designed and well written character.

And she’s fun. She has a ridiculous, yet classy love of fashion (without it being an obsession) she snarks with the best of them. She lacks spunkiness yet at the same time tries to follow her own path when she can (even when people are determined to hem her in) she doesn’t give up and she fights like a cornered wild cat when necessary. She’s also a martyr and a hero – one of the few people in this entire cast of selfish, agenda-driven people who is actually doing her utmost to do the right thing despite how much it costs. Preferably while looking awesome in a $3,000 while doing so.

Inclusion-wise, Rahel is back and in charge, so we have one POC hanging around again, which is a relief after the last book. Unfortunately that pretty much sums up the entirety of the inclusion in this book – this book that spends the entire time in Las Vegas, no less.

All in all, I continue to like this series and I’m extremely intrigued about where it’s going next. It could use a lot more inclusion though. Joanne is also a brilliant character but one that could lose me quickly – she’s so vividly painted that if she stepped badly out of character it has the potential to jar me out of the story – so far so good.