Review: God Save the Queen by Kate Locke, Book 1 of the Immortal Empire Series 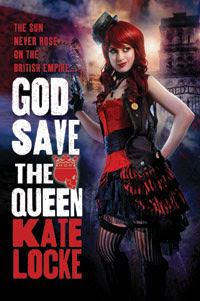 Xandra is a half-vampire, her father a vampire and her mother one of the courtesan carriers of the plagued genes. Like many halvies, she serves the vampiric and were aristos that rule the county, in her case as a Royal Guard – and one of the Royal Guard’s best. And they need to be good – after the Insurrection, there are considerable human forces constantly seeking to overrule the immortal Queen Victoria and her vampiric court.

But, despite this, Xandra finds herself caught up in one of these treasonous movements herself, despite her position as Guard. When her sister is taken in to the notorious mental hospital of Bedlam, where Xandra’s mother was said to have died, Xandra confronts her own fears to find the truth. Unwilling to be dismissed, her investigations uncover surprise after surprise – and a deep conspiracy that rocks the place of all halvies in society. She ends up torn between family and duty – and betrayed by people she trusted beyond all others.

And through that she has to learn the truth not just about her friends, her family and her society and leaders – but also about herself. Her true nature, her true being and what that really means.

This book had a very shaky start for me. I start reading and am instantly treated to one of the longest, most convoluted info-dumps I’ve ever read as Xandra mentally resumes the entire world for me, the creatures, the politics, the history, her family and her personal history. It’s huge, it’s long, it’s interspaced with lots of area description and emotional exposition and it’s pretty hard to follow – I actually had to re-read several parts to double check the huge amount of information being imparted.

It put me off and, if I’d been skimming in a book shop deciding whether to buy or not, I’d have put it back on the shelves, disappointed. But it is worth holding on, getting through that shaky beginning and keep on reading. The world is revealed again in more sensible terms, the characters are more developed and then the real plot kicks in.

Once you get into the book, the world is fascinating. The supernatural here is a plague – the plague – kills people but leaves some survivors with offspring that carry the plague, that eventually over the generations changes them into vampires, werewolves and – when the werewolf and vampire plagues combine or through throwbacks, the lethal and terrifying goblins. The book is set in the 21st century, but it’s a very different world from ours. It’s a world where the immortal vampiric Queen Victoria still reigns, ruling a vampiric and werewolf aristocracy that precariously rules over a majority human and disgruntled populace. In between are the half-weres and half-vampires, serving the aristos with their much greater numbers.

Because it’s 21st century, we have much of the same technology displayed as you’d expect. But because there’s also powerful elements demanding the world stand still – the Queen’s conservative sensibilities, the aristos discomfort with the modern, there’s also a very strong steampunk aesthetic. It has a really interesting mix of modern and Victorian values – with things like a deadly fear of gossip and reputation, but a casual, liberated view of sex and sexuality.

The story is also interesting with a lot of twists, depths and shades to it. We have a multi-level conspiracy, but against a backdrop of a deeply divided society, which adds a lot of complexity to the mix. Even as she finds the conspiracy and the truth to it, Xandra can’t commit all the way because of human prejudice against halvies and her own dislike of humans. The plot follows through discovering exactly what the conspiracy is and how far it goes, how half-vamps/weres are treated by all sides of the spectrum as well as huge revelations about Xandra’s own self, blood and history. Many assumptions are challenged but it’s never quite black and white because of this very complicated world as she tries to learn exactly who is responsible for the crimes she sees, who the good guys and bad guys actually are and how that mixes with her role as a Royal Guard.

I won’t say that the ending is entirely unpredictable, but only because it’s well foreshadowed and explained. You can see it, feel it building up into an epic finale and even though you can see it coming, it doesn’t make it any less exciting when it does happen. In all, I found the plot exciting, fun, fascinating and full of interesting nuance.

There are times when I’m frustrated by Xandra’s reactions – her accepting criticism and chastisement at times when I think she should slap it down. Times when she listens to people I don’t think deserve her time. But on the whole the character is sensible and realistic – she doesn’t take anything on trust, she needs to be convinced but she is willing (perhaps a little too willing) to be convinced and to listen. She isn’t perfect, she does make mistakesShe’s fierce, she’s fun, she’s strong, she faces hard decisions and choices and rolls with it. She is, perhaps, a little prone to violence but that is explained within the story. She’s a good character with strong family bonds who reacts appropriately to her situation – especially as it becomes more and more complicated.

The book did surprise me with its inclusion. Not that any of the major characters (hero or villain) were POC or GBLT, far from it, but a decent number of the minor characters were. Xandra’s brother is mixed race and her sister is in a relationship with another woman who is also a POC. These are the closest in her life but there are others around the periphery. They don’t play major roles, but they’re there, they’re devoid of stereotype and damaging tropes and there’s no desperate urge to either abuse them to push them down a trope. They could have done to appear more often but they were there and they didn’t make me cringe.

The book also manages to balance the idea of a hated group without it being a marginalised group. The aristos are hated by the humans and they lead a violent uprising in the past, Xandra hates the humans for both past and present crimes. Half-vamps/weres are regarded with contempt by the aristos and hatred by humanity. And everyone hates and fears the goblins. But despite all of these negative attitudes between the groups, none are presented as marginalised and their individual powers are acknowledged – the aristos from their social position, the humans from their sheer numbers and threat that causes aristos to hide (any oppression they face is through class more than humanity), the half-vamps/weres gain standing and social respect from their closeness to the aristos and the goblins are so individually powerful and dangerous that no-one could oppress them. It’s good to see an author address hatred without appropriating oppression.

This book is full of originality. It’s new, it’s novel  and it has a very unique world. It also has a very involved, complex world with  lot of nuance and potential for so many different stories. I like the characters, love the setting and, after a brief hiccough in the beginning and, perhaps, a bit of a habit towards wordiness, I loved the story with its twists and layers. It was fun, it was exciting and it was interesting – and I can’t wait to read more.