Review: No Humans Involved by Kelley Armstrong, Book 7 of the Otherworld Series 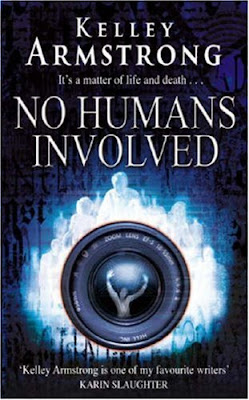 Jaime Vegas, celebrity spiritualist, has the chance for her big break. A cheesy TV show in Hollywood, raising dead celebrities cumulating in that cheesiest of the cheesy – Marilyn Monroe. The problem is, Jaime isn’t just a spiritualist, she’s a necromancer. She can actually see and communicate with ghosts. This gives her an amazing advantage with some excellent credibility when she does get through to real dead celebrities, but is somewhat more difficult when you have hanging men over the breakfast table.

And worst still when there’s some unknown, impossible ghosts haunting the garden. Ghosts that may not be there at all – but maybe a source of the Necromancer’s worst fear, losing touch with reality altogether.

Tracking down these faded ghosts proves no easy matter, as no-one in the magical community – down to the very darkest of dark practitioners and even the demons themselves, know of any spell that can do this. It’s a path that leads them down the dangerous and unknown paths of supposedly impossible human magic.

And to complicate things, it turns out the TV show is actually a reality show filming her every move, and she’s trying to pursue her much wanted relationship with Jeremy, the werewolf Alpha, now she’s finally got him alone.

The story and the world building mesh so well in this plot, especially with Jaime’s life. It has some original features – Big Brother Spiritualist cracked me up – and an intriguing mystery – what can make a thin, faded ghost? The question leads them to many, realistic places, each of which shows us some more of the world. We catch up with Paige, Lucas and Savannah (I always like to see the state of previous protagonists), the methods of dark practitioners, Hope and her mission to keep the supernatural quite by making it look ridiculous in the tabloids

And we get to see Jaime’s daily life as a Necromancer – what it means, what a nuisance ghosts can be, how heart breaking it can be to be unable to help and how frustrating it is to have

The new thread of human magic, humans seeking supernatural power, theories about latent supernatural blood is also an interesting new thread that adds texture to the world, especially when contrasted with the supernaturals and their immortality experiences – the extremes people go to for the unobtainable.

I really like how Jaime’s character is developed. We naturally gain insights into her past, her goals, her worries and insecurities as a celebrity spiritualist in a way that fits seamlessly with the story. Over the course of the book we see Jaime grow and, eventually, discover her own aims and her own desires as opposed to the desires she thinks she ought to have or the desires her mother is convinced she should have. We can see her conflicts between her job and what she sees as her duty as a necromancer – and why that duty is so difficult and often unfulfillable.

Jaime is one of my favourite protagonists in the series. She’s fun, she’s sarcastic, she’s cynical and wry yet still hopeful. She’s sexual without a hint of shame. She knows what she wants but isn’t perfect, she has an unhappy childhood that has left its mark on her, but she hasn’t just brushed it off and nor does it consume her with endless angst. She’s a really well balanced, very real character, she’s a very human character. And she has her own strength, even though she isn’t physically or magically dangerous, she is a strong character without being a violent character.

Does she make mistakes? Yes, she even has a spunkiness about her with her constantly taking silly, even ridiculous risks she doesn’t need to. Even enduring things like the taunting ghosts when she has Eve to stop them. But they fit – this isn’t unreasonable spunky agency. Jaime takes risks because she wants to prove herself as more than the shallow, celebrity necromancer who takes a back seat in council matters. She wants to be as active as Paige and Lucas and the Werewolves – but lacks the offensive powers to back it up. While her decisions are reckless, even foolish, they are grounded in strong, sensible character reasoning and motivation.

Sadly, it wouldn’t be an Otherworld novel without the protagonist being kidnapped. Jaime Vegas  and Hope are both kidnapped in this book – and both are series wide contenders for the most imperilled woman. But it’s redeemed in that Jaime Vegas frees them both to a degree – not particularly needing the men to save her – and by Jaime Vegas constantly lamp shading her own peril. Unfortunately it’s reduced back again by how much reassurance Jaime needs – especially when she’s in the basement hiding from the S&M cult.

Her relationship with Jeremy is also interesting to follow. It developed slowly, even if it began with an embarrassing crush. It’s cute, it’s fun and it lets us see a side of Jeremy we haven’t seen before since he can let go around Jaime and not maintain the aura of Alpha implacability he has to around the pack. It allows more character development and allow them to be such a great couple.

Hope provides some much needed and much delayed racial inclusion and she is a major character and a future protagonist – which is a very nice change of pace. Other minorities are largely absent, however which, again, continues the habitual erasure of the series.

Not only was this a good book – a fun read with a fun story and some great characters, it was also a nice change of pace to follow Jaime especially since many of the protagonists we have been following are now very stably ensconced. The plot was interesting, the mystery was, indeed, mysterious and the character interactions ideal. It was also one of the few romances in Urban Fantasy that I genuinely enjoyed.