Review: Whispers Underground by Ben Aaronovitch: Book 3 of the Rivers of London Series 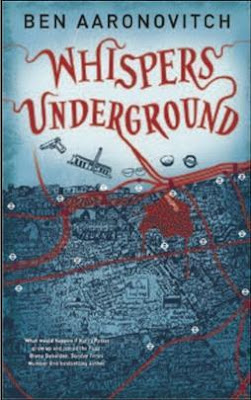 Peter Grant is back and he, Leslie and Nightingale are faced with the ongoing dilemma of wizards with dubious ethics wandering around London doing very very unpleasant things. It’s be useful to be able to focus on them – but, of course, other things arise.

Including a murder – a murder which Stephanopoulos and Seawall, doughty members of the murder squad that they are, believe involves funny magic stuff. Not that they ever use the m-word, nor do they expect it to be used around them; they just know it makes their lives much much more complicated. And to make matters worse and even more complicated, the victim is an American, and the son of a state senator at that.

It’s a case that takes them into the warrens of London’s underground –it’s sewers and it’s railways and it’s many many many many tunnels that go on for miles and have been centuries in the building. It’s a maze down there – and it’s beyond amazing what can actually hide down there, unseen, for so very long as they try to find the cause of the man’s death – and the many surprises awaiting them underground.

It’s another review of fulsome praise, I have to say. In some ways it’s easier to write a review with lots of dubious errors, pacing issues or diversity fails because at least you have something concrete to say. When a book is just awesome you’re presented with the difficulty of finding a sufficient diversity of superlative adjectives to try and fill a full review.

The book has an incredible feel of place. You can feel London in its pages, the attitudes, the people, the places, the procedures; this is London through and through.  The richness and authenticity of not just the places, but also the history really shows through the book and makes everything so much more real. Despite the fantastic elements, it feels more fact than fiction because there is so much realness there. And not just in the places and not even just in the people, but also in the police procedures, the different jurisdictions, the way different things are handled, the way they were handled – and not just the way they’re officially handled, but also the daily practicalities of daily life.

The book is also funny with constant little side-references, tangents and wry observations about life, the city and everything linked with a cynical acknowledgement of how things are with an amusing twits that makes me repeatedly smile and laugh out loud. I’m not sure how much of it travels outside of a British context and British understanding, but to me it was perfect – amusing, injected lightness and fun and added yet further to the strong British feel of the book.

The pacing is excellent despite the evocative descriptions. It’s wordy and full of tangents and side-tracks, Peter is notorious for them, but all of them are relevant, provide useful exposition, fit naturally and, for the most part, are extremely amusing as well. It never felt slow or bogged down. It had moments of excitement, a lot of intriguing scenes, a lot of powerful scenes and, again, it was repeatedly and reliably funny; 3 pages didn’t go by without me smiling.

Leslie and Peter bounce off each other extremely well and I’m really happy that Leslie has joined the team at the Folly and becoming a more involved fully round character. Together they make a great team, Peter’s wandering mind is wonderfully balanced by Leslie’s focus. His imagination by her professionalism. It’s one of those partnerships where they do both truly bring something to the couple. And it helps that their banter is funny.

The book is also racially extremely diverse. And not just diverse with token inclusions or even with a mixed race main character – but also with a strong sense of culture and awareness. From food, the family, from hair, to cultural outlook – this book doesn’t just throw in some darker skin tones or a hijab and tick the diversity box – it creates characters, real people with culture and background and personality.

It also deals with racism – not big dramatic incidents or moments of preaching. But the micro-aggressions Peter and the other POC face are certainly covered. They’re never accepted, they’re always underscored as wrong and they’re not brushed under the carpet while we pretend it never ever happens or they’re once in a lifetime incidents. It’s extremely well portrayed – and it extends to other issues as well, including class, unfairness and dodgy police actions. No lecturing, no big dramatic moments, but constant side reminders of the daily problems and issues that fit seamlessly into the story.

If I have a complaint on the diversity front, it’s with the gay characters. While I like the lesbian detective, she is highly stereotypical, though I do like the fact that everyone’s too damn scared of her to pull any homophobic nonsense. Unfortunately, any reference to gay men in the story are about men Peter assumes are gay based mainly on their clothing. There are some side references to the existence of gay people but, again, in rather stereotyped fashion.

When I got this book, I started reading. Piffling things kept trying to interrupt me but I wasn’t to be disturbed. I’m not sure (the outside world just faded away) but I may have been walled up in a small room with warning signs and fed coffee until I finished it, for fear I would bite anyone who dared to interrupt me. It’s an excellent book with amazing characters, a brilliant story, a rich, wide, very real world and an endless source of amusement. It was an effort of will not to return to the front of the book as soon as I’d finished it.