Review: The Janus Affair Book 2 of A Ministry of Peculiar Occurrences by Philippa Ballantine & Tee Morris 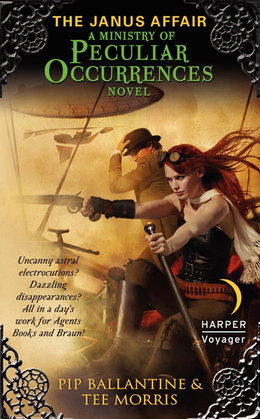 Though Wellington Books and Eliza Braun are still ensconced in the ministry's archives, they both continue to investigate cases.  A nefarious plot still carries on to bring down Director Sound and with him, their beloved Ministry. By continuing their investigations, Books and Eliza continue to disobey direct orders and are unknowingly placing the future of the ministry in jeopardy.  They manage to continue clandestinely, until the kidnappings of suffragette's begin to occur.
Elisa is deeply committed to the cause quite naturally and when she notices that the kidnappings are being filed in the archives without so much as a cursory investigation, she dives in with both feet, once again dragging Wellington with her.  When Eliza's first love Douglas Sheppard arrives in London with his mother, Mrs. Kate Sheppard, Eliza must protect the much needed leader of the suffragists and confront her feelings for Douglas. Wellington quite naturally becomes jealous and attempts to draw Eliza's attentions back to him at all costs.  Eliza now must not only solve the case of the mysterious kidnappings, she has to decide where her heart truly belongs.
It is impossible to read this novel and not root for Wellington and Eliza.  In The Janus Affair, we learn more about the apparently retiring archivist and it's fascinating.  Clearly, he has unresolved issues regarding how he was raised and the fact that he hears his father's voice in his head continuously throughout the book, suggests that Wellington is not neurotypical.  This is a rare thing in any genre, let alone steampunk.
Unlike  Phoenix Rising, The Janus Affair is not an all White world. Agent Ihita Pujari is a good friend of Eliza's who also works at the ministry.  When Ihita is first introduced, we are practically beat over the head with the fact that she is Indian, as though we could forget.  There is a continual reference to her dark brown skin.  Ballentine and Morris also use food as a way to add an authentic culture to her character,  which was nice, as far too often characters of colour are divorced from their culture.  I do however think that Ballentine and Morris took it a step too far to have her join Eliza and Douglas on a double date wearing a Sari in the middle of a cold England winter.  In the end, Ihita is killed and does not really add much to the story itself.  Her death serves more as inspiration for action than her character did while she was alive.  The other characters of colour are twins - Chandi and Chandankika Culpepper, once again from India.  Their motivation for action is "an antiquated religious belief." [pg329] We know that the Queen does not support the quest for the vote, but it is the Culpepper sisters who are backward. It sends the message that those who conform, as Ihita largely did are the acceptable people of colour.
The POV in this novel constantly shifts, which at times makes it a little difficult to follow.  The writing also feels muddled and convoluted at times and leaves the reader wondering if everything is going to eventually going to make sense.  I expected to zoom through this book as I had with Phoenix Rising, but that was not the case; there was simply far too much going on at any given time.
I really liked that a large part of this novel was centered around the right for women to vote.  This naturally led to strong female characters who were unafraid.  The majority of the action in the novel involved women in what would be deemed progressive roles today, let alone when this novel was set.  We even got the inclusion of Dottie, who as a mob boss, rules her territory with an iron fist.  One of the great things about this series as that even though it is set in Victorian England, women fulfill multiple roles which are typical reserved for men.  In terms of gender, this series is positively progressive, as long as the character is White.
Our daring duo is headed for the new world and now that it has been established that they really and truly care for one another, I worry that some of the tension from this series may be lost.  I hope that the irrepressible Miss. Braun will still be able to drag Wellington into trouble.  The best moments in this series are when Eliza and Wellington are side by side investigating.  The Janus Affair does not quite live up to it's predecessor, but that does not make it a bad read per say.  I am still very interested in following the adventures of Wellington and Eliza, I just hope that any follow up will be a bit more focused.