Review: Kiss of Death, by Rachel Caine, Book 8 of the Morganville Vampires Series 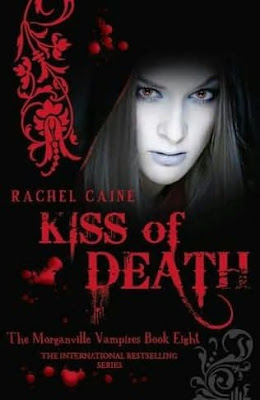 Michael has a made a deal with a recording studio to finally get his music out there. It’s exciting, unique – and involves them leaving Morganville. This is also a useful opportunity for Claire and co since it allows them to avoid a deal Claire made that could get them all eaten.

On the road, they quickly raise the chance of finally escaping Morganville for good. But Oliver has been sent as chaperone and what about the loved ones they left behind? More, it’s clear that Even and Michael, residents of Morganville all their lives, have little idea of the outside world and how to behave in it.

Then there’s the problem of the vampire rebels. With the Morganville security network down, the only thing holding the vampires in Morganville is Amelie’s word. And some are not accepting that. Leaving the town, these wild vampires are looking for a new place to take over, one without the rules and restrictions of Amelie. Their travel makes them cross paths disastrously with Claire & Co – and when they reach their destination, they find things are not what they expected.

I’ve always had mixed feelings about this series. I’ve felt that the world that has been built and some of the background characters have been fascinating and have a lot of potential.  Unfortunately the main characters don’t appeal to me and I often find Claire, the protagonist to be an outsider in her own story. In short, I was coming close to giving up on the series, it’s just not for me.

This was my “last chance” book, the last book I’d read before I shelved the Morganville vampires and didn’t open another one.

By taking the story out of Morganville, we introduced a lot of new contexts and themes. We got to see how the very insular life the Morganville residents had lived. How they were so used to the supernatural dangers of the vampires and how they are used to negotiating the dangers of Morganville, that they were utterly lacking in the social skills necessary to survive in small towns with close minded, dangerous people without vampires lurking around to keep order. It was a really well done twist that added a lot to the world, the characters and the story.

It also helped that the vast majority of the action happened to the actual characters. Claire was involved in the plot lines, they weren’t things that happened around her. Despite the fact that both Michael and Shane constantly play protector to Claire and Eve, or rescue Claire and Eve, or complain at each other about being made to “wait with the girls” they are still involved in the plot, however grudgingly.

I liked the survival horror nature of the abandoned town, albeit I think it could have been developed more. And what both the vampires and the illness would have resulted in if it had gone unchecked, if the cure hadn’t be found – a small glimpse of the apocalypse that could have come. It also, using the conflicts of Amelie and Oliver’s threats contrasted with the wild savagery of the rebel vampires, brings a nice contrast between the oppressive, restrictive Morganville and the need for that repression and those rules.

The story was well paced and kept me interested. There was no down time where the characters didn’t seem to be doing anything. There were no pointless side plots that added nothing to the story and development. There was limited time sat and ruminating over what had happened. The book stayed on point, showed more than it told and kept the characters involved with the plot.

Claire also went an entire book without me thinking that it’s a miracle the girl has sufficient brain power to remember to breathe. After so many books of poor decision on poor decision, it was a pleasant surprise.

Unfortunately, the books feel the need to throw in relationship angst even when there’s little or no basis for it – and in this case that meant Eve and Michael would suddenly have a huge, confusing rift thrown between them. I don’t know where it came from, I don’t know why its there – but suddenly they’re at loggerheads.

The series still has major problems with inclusion – it’s completely straight, nearly completely white. There’s not even a token walking around.

In general, I won’t say this book was one of my favourites, but it was a fun, light read, with plenty of action and some interesting concepts and twists to make it worth reading. I think I’m inclined to think positively of this book not so much because I loved it (though I did like it) but because so many of the problems that have dragged down this series in my eyes are not present in this book – all the things that frustrated me so much aren’t here – making it a massive step up on previous books.