Review: The New World, The Last Delar by M. Cuzino 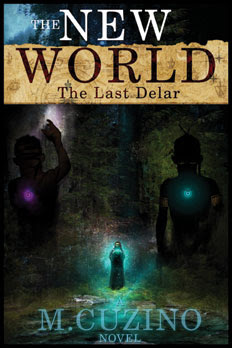 Aneklou and Oskeau are twin brothers and the last survivors of the ancient Delar. Their mother is forced to send them out into the world as babies as the conquistadors approach, each finding their own path.

One son grows and knows family and love, he knows loss and pain but he also knows caring and guidance and wisdom. He is introduced to different cultures and the strange people of the world around him, gaining in skill, wisdom and magic.

The other knows no love, only slavery, cruelty, isolation and pain. But he finds ancient powers that respond to his blood. He treads a much darker path, rising from the slave to the slavemaster, from the abused to the abuser and from the downtrodden to the ruler

The conquistadors themselves have found ancient, dark magic that has lead one of them, meddling with things he doesn’t understand, to build his own dark empire.

When this book was given to me it was described as an alternate history with paranormal elements in 1400s America with parallels to colonisation. If I wasn’t told that, I wouldn’t have known it. There is nothing in the book to suggest this is America. Not the people, not the wildlife, not the plants – I didn’t see anything that made me think America. For that matter, I didn’t see anything to make me think Earth – sure there were mentions of Spain and a vague allusion to conquistadors, but no follow up in the rest of the book. The book was far more full of completely alien creatures – black furred “gliders” with claws that lived in trees. Quill-backed monsters. Giant frog-people. These different intelligent creatures that the human protagonists (from an ancient, magical “Delar” people) kept running into.

It didn’t feel like Earth or America. And if it was pre or pending-colonisation America, it felt like what was REALLY there was just completely removed to be replaced by this alien, fantasy world. Which goes for the characters as well - the cast of humans is supposed to be 99% Native American people. However, if I didn’t know this already, I wouldn’t have been able to tell this from the book. Just as there is nothing in the book to indicate that we’re in America (or on Earth for that matter), there is also nothing about the characters to indicate they are Native American. Even when we have characters who are supposed to be European (one evil wizard lord, I think, and a woman escaping persecution from Spain) there is nothing in the text to differentiate them. I don’t know if this is a story involving Native American people and 1400s America – or whether this is a story where Native American people and 1400s America has been completely erased from existence to make room for this fantasy world.

This book was also sorely in need of an editor. The writing is clumsy, with lots of jerking to different points of view in different scenes. I, frankly, got lost following as to who this evil wizard bloke was actually supposed to be (and frequently confused him with Ankelou’s brother). The story switched about enough, with a large number of characters and a large number of characters who changed their names (then switched back and forth between those names) to make it really confusing.

And the writing just didn’t flow. There were choppy sentences, there were run-on sentences. There were clumsy word choices I think were chosen for dramatic effect but, frankly, seemed silly. Like referring to his children as “seeds of his fathers.” A woman referring to someone wearing “armour forged from ore.” This woman is carrying a steel sword, she knows what metal is – it’s ridiculous that she, or anyone, would refer to metal this way. A 3 year old child referred to as “a child who has grown for 3 years.” It’s clumsy, it’s bewildering and it’s jarring. It didn’t help that there were English mistakes as well like “quite” and “quiet” being missed up, “their” and “there”. To finish the writing, the whole book is written in the present tense, which is very hard to do well – and this didn’t.

Because of this, I just couldn’t enjoy the story. I won’t say it was badly paced – it wasn’t. In terms of timing it flowed well in showing the experience and growth of Ankelou and his brother, how it moulded them into what they are, how they developed their powers (though their powers are never really explained). There was no down time, no slow bits and everything was relevant. I think – but the writing made it so very hard to follow what was going on.

And the world building was lacking. Not that the world isn’t rich and full – it was. But we didn’t see enough. New creatures appeared but we knew next to nothing about them. Dark times were referred to in the past, but there was no elaboration. We get a vague hint of this conquistador becoming a wizard when he finds dark power, but no real development of how or why or what. We have many references to the Delar, but no indication as to who, or what they were. We have magic but no real idea how it works. Things are constantly referred to but never explained – it’s frustrating.

We have no GBLT characters and, as I’ve said, either all the characters are POC or none are. I am not really sure. For female characters we have some small parts as mothers (and one a dead mother at that), a witch who is an absent mentor we barely see and a princess who needs rescuing. We have one strong female companion of Ankelou – she is a capable hunter, one of the most skilled out there, and a dangerous fighter. But she’s being set up as a love interest almost from the first moment they saw each other and she has been injured – and rescued by Ankelou – twice. I wish I could give more praise to her and she’s not a bad character – she also has an interesting past (which was used to justify her being sulky and moody) but it’s not ideal.

This book, the world, the concept and the setting is interesting and had a lot of potential – albeit as a fantasy novel rather than an attempt at Historical Urban Fantasy. But the writing really tripped it up, along with the lack of world building, the rather incoherent way the story is written, the lack of exposition the lack of any real explanation at any point during the story just dragged it down and made it a painful slog that was just not fun to read.

***When we first received this book for review it was called Caldera: Book of Ixin and the author was Matthew T. Cousineau as he is known on Goodreads. Since then the book name and cover has changed to The New World (The Last Delar) by M Cuzino.