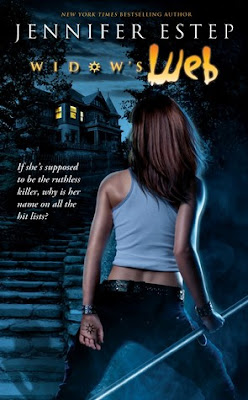 Gin has almost settled into a routine, albeit one dogged still by amateur assassins trying to prove they’re more deadly than the Spider. That is until Philip Kincaid, crime boss and one of the contenders for Mab’s old throne, comes into her BBQ restaurant to hire her. Not as an assassin, but as a caterer.

Of course, nothing’s that simple and when a deadly Elemental assassin tries to kill Kincaid during the party, it’s only Gin’s actions that save his life. From there it takes only a little while to discover Kincaid’s shared history with Owen, her lover and Eva. And Salina

Salina, Water Elemental, deadly, manipulative assassin and wannabe underworld boss. And Owen’s ex-fiancée. A lethal killer who wants Owen back, who wants revenge for her father’s death and is willing to destroy anything in her path. A tough call for Gin to bring down – and preserve her relationship with Owen.

After the last book, I wasn’t really ready for another relationship drama. We’d just finished with Gin and Donovan Caine last book, I wasn’t up for having Owen then deal with his ex. I did think it was handled well, Gin was jealous without being unreasonably so. Gin disliked Salina but, again, she had reason to dislike her. It could have been a lot worse, it really could. And there were several moments when I cringed and expected it to be worse. I expected Owen to ignore or downplay what Gin told him about what Salina did to Eva. I expected Owen to defend Salina more than he did. I expected there to be a lot more “get your hands off my man” moments. In short, I expected a hot mess, and didn’t get it. There were uncomfortable elements – Owen wanting to go easy on Salina, Owen defending Salina, Owen assuming the best about Salina – but none were excessive or beyond what I would expect. I still wasn’t happy with the love triangle, but it didn’t dominate. Ultimately, Salina’s past relationship with Owen was a complicating factor, but the main reason was that Salina was dangerous, that Salina is trying to kill people - people who don’t deserve it.

After seeing so many of the elementals in this world, I often wonder what new could be raised. I was very impressed by how water magic was presented. It’s rare for water magic to be presented as dangerous and it is often relegated to healing. I though this would be the case in this world since the Elemental magic replaced water with ice. But Salina’s water magic was presented in a way that was extremely lethal, powerful and even frightening. I was also glad to see Gin pulling out the big guns. I was getting tired of the whole “Gin is the most powerful elemental in the world ever” speech followed by a train of elementals who are just too strong for her. I’m glad to see her using her magic more after so many books of getting over her issues. I still love the world – I love the elementals and vampires and dwarfs and giants. I love the complete integration of these things into the “normal” world. It has a lot of depth, a lot of variety and is extremely internally consistent, which is hard to maintain over this many books.

I don’t know if this comes from my love of cooking but I love that Gin cooks, I love that at least once a book she will take the time to cook things and more than just “I cooked X”. And, yes, I did make her apple pies and they’re yummy.

The villain is a woman who uses guile, seduction and manipulation as tools and weapons. It’s a trope that dogs a lot of women and a lot of female villains. However, like any trope it can be defeated with simple counter examples. And while Salina is a classic trope, we’ve had Mab and Electra as female villains who have avoided and subverted the trope. Both were dangerous simply by being dangerous not by being seductive. Similarly we have many other female characters who are all strong in their own ways beyond seduction: Gin, Jojo, Bria, Roslyn and Sophia. Each is very different – from Roslyn’s beauty and endurance, the Gin’s ruthless ferocity, to Bria’s conscience and determination, Sophia’s survival, Jojo’s class – they’re all very different women but they’re all very strong women. It’s one of the things I love most about this series – not only do we have a powerful, female character as a protagonist, but she also has a lot of strong female friends as well, friends who are storing in their own right. Yes they do spend most of their time supporting the protagonist and a couple of them have been rescued by her, but they are independent people with their own lives, their own motivations and their own existence that doesn’t revolve around Gin.

What I really don’t like, though, is that part of the villain’s villainy involves a fake rape accusation. I hate that meme, I hate the damage it causes and I hate the culture of doubt we have around rape. It was unnecessary and it’s damaging

Inclusionwise, the book has the same problems of the series. There’s only a bit appearance of POC is a couple of brief inserts. There are still no GBLT people in the series.

Salina’s treatment as an insane person is difficult. On the one hand, the idea that she set out to slaughter people because she is mentally ill is highly problematic because of the constant portrayal of mentally ill people as dangerous – a false portrayal at that. At the same time, Roslyn makes it clear that Salina was always cruel even before her father’s murder. So, while seeking revenge for her father’s murder is presented as one of her primary motivations and her suffering a psychotic break after the death may be part of what contributed to her current behaviour, it’s clear that she was always this dangerous, this sadistic and this deadly.

This was a great book – and I say that as someone who really isn’t keen on relationship drama. And, yes, I could have done without it, not so soon after Donovan Caine, but I liked to despite it. I even liked the relationship aspects because it avoided so many of the pitfalls I’m used to. I aren’t keen on Owen’s snit at the end and the character has gone down in my estimations (but he was never one of my favourites). The world, the character, the stories – they’re all still excellent and this series is keeping its quality even after the death of the big bad.