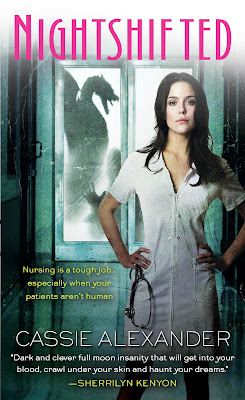 Edie is a relatively new nurse dealing with many problems – student loans, making ends meet, her brother’s heroin addiction and dragons rampaging through the wards.

The latter because she’s a nurse on the Y4 floor. In exchange for the dark powers that run the hospital making her brother immune to the effects of drugs and alcohol, Edie has given up her more lucrative job at a private hospital to work treating the county’s supernatural community in the hidden Y4 ward. Vampires, wereanimals, zombies, shapeshifters and even dragons pass through the wards, all with their own illnesses and injuries to be treated.

Treating one of those patients drags Edie far deeper than she intended to go. Compelled – either by vampire wiles or her own conscience – to do the right thing, she seeks to save Anna, a vampire in a young girl’s body, from abuse. In doing so, she kills a vampire – and finds herself facing trial in which the punishment can be her very soul – if she does not mount an appropriate defence with what friends and allies she can muster. And it’s not like her daily life isn’t already complicated!

This book starts running. You open the book, get a brief introduction and then you sprint into the plot. Suddenly stuff is happening and characters are doing stuff and you’re not quite sure who they are why they’re doing what they’re doing or what it all means or what everything is or what the implications are – but it’s all happening and it’s all happening now so you better run to keep up or just drown in confusion. You don’t even know who the protagonist is but she’s killing vampires and rescuing people and someone’s dead and they’re a bad person – no, wait, they’re a good person… or not? And someone’s bitten – wait, she’s bitten twice? And there’s a fire and and and…

Right, take a deep breath, because, thankfully it doesn’t continue like that. After this sudden introduction wherein a huge amount of plot is thrown at you in a short space of time, the story then slows down. We get more of an introduction to Edie, her life and the world she is in. It’s slowed down and with the more sedate pace and chance to assimilate information, we get to fill in a lot of the gaps that were left hanging in the first part of the book. It’s still jarring and disorienting and I think some of the introduction could have done better before the action would have been better, but it does work.

After that beginning the rest of the book continues at an excellent pace. Neither rushing and leaving me breathless nor dragging or distracted. We have some time spent on world building – though I think I would have appreciated more with the sheer amount of supernatural gubbins introduced, it would have been nice to have more backing to them. That being said, we certainly had enough information to follow the story and the rest is left there as a tantalising carrot to bring me back for the next book to see more of this huge, fascinating world.

Edie herself is an interesting and very real character. I think I’d best sum her up as a cynical idealist. She wants to hope, she wants to do good, she is determined to care and to help people and feels guilt and pain when she makes a mistake or someone is hurt. Yet, at the same time, she has been through the school of hard knocks, she has few illusions about how harsh and cruel the world can be. She has a heart of gold with a cynical exterior – and I think it’s really presented well to encompass both, both her willingness to care with her lack of illusions of how hard the world can be. I think this is epitomised in her relationship with her brother, a heroin addict. She loves him, she cares for him, she worries about him and she sacrifices for him. Yet, at the same time, she has little expectation of him quitting his addiction, she knows she can’t trust him and is repeatedly driven to fury by his stealing from her.

She’s sexual without shame – happily engaging in one night stands, even seeking them out. Yet at the same time we have some consideration of the consequences of sex without protection that is also taken into account. While I liked the character of her love interest – and certainly didn’t mind that he was a zombie, in fact, the way he was presented was a fascinating take on the zombie mythos and added an extra level of grimness and grittiness when we considered what he has to do to survive and heal. Edie confronting that could probably use more depth, but I think she covered it as well as she could in the circumstances and it would be something she’d have to deal with if their relationship continued – it wouldn’t just be brushed under the rug. I did have an issue with how fast their relationship developed – from them just meeting to him being will to spend copious amounts of money for her, to him killing for her, to him even risking his life for her and even for her being so upset about him leaving. I think they went from affection to love too quickly given the amount of time they spent together.

I liked the idea of a nurse to the supernatural. The whole need for a hidden hospital floor and dealing with the medical issues of the monsters out there is fascinating and definitely something I want to see developed. It was also interesting to see a protagonist who didn’t have super powers – I’ve read a few, sometimes they work and sometimes they don’t, this one, I think worked very well. Partially because her whole interaction with the supernatural world wasn’t based on a lover (as is so often the case). It brought a pretty unique angle to the genre with an already pretty original world. The plot itself was interesting and kept advancing with new revelations. Every time I thought I had it fixed, a new layer was added with added more depth and strength to the story. Anna went from being a kidnapped, abused girl to so much more and at no time did we ever see her less than a danger –but whether a young vampire with poor control or a calculating and manipulative vampire with considerable powers is a very different shift.

If I have one complaint about the plot it’s that sometimes there was so much happening and so many characters involved that I got lost, I don’t think the group scenes were particularly well written and I often had to skip back and re-read to find out exactly what happened and why.

Inclusionwise, I think that Ti was a Black man, his dark skin is referenced, but so is he grafting on other body parts. He’s a good character, a strong character and a capable character, but all of his motivations revolve round serving Edie and becoming a devoted love interest willing to sacrifice for her based on, as I’ve said, a relatively short relationship. Gina, a fellow nurse, is Latina and is competent, strong, fun and a much stronger character, I like her and hope she plays a larger role in the next book.

We have no GBLT characters on the face of it. We had Meaty, a nurse whose gender Edie couldn’t decide, but that was presented as far less Meaty’s identity and far more that Edie simply couldn’t tell. The language used to refer to Meaty was far from ideal as well and just makes me hope more that Meaty isn't some form of gender-non-conforming just due to the language use

We did have some interesting discussions of class. Edie frequently referred to the difference in health care and quality between the expensive, exclusive hospitals and the country hospital. The resources, the amount they paid the medical staff etc were grossly different which speaks volumes about the quality of health care offered. Similarly, Edie, with her student loans and low salary, often has to worry about money and making ends meet, something made even more complicated with her brother’s addiction and stealing from her.

To conclude, I really really liked this book. It was an extremely good book and comes very close to being an excellent book. The only thing holding it back from that line is a little shaky in the beginning, a few of the group scenes that are gaping a little at the seams, and a little more attention to the world building and it’ll be up there.