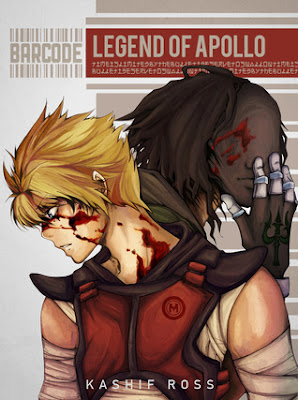 Spencer Colt carries the barcode of the god Apollo, making him one of the most powerful Gladiators in the world. But such power comes with a price – in particular a destiny to face off against Helios, the tyrant of the east coast.

In this future America, the country has been split by devastating war. A war so destructive that the gods themselves acted to end the conflict. Now wars are fought between gladiators – beings enhanced by the gods and demigods – but not everyone plays by the rules and Helios is plotting to expand his empire by any means necessary

While leaves Spencer with a hard destiny to live up to, complete with a father with high expectations but no time for him and woefully inadequate training and a complicate love triangle between himself, Hannah who he’s always loved, Michelle who he’s often fought and Angie who everyone thinks he should be with due to prophecy.

And then there’s Kode – empowered by the mask of Tartarus and caught in numerous, horrendous acts – is he an enemy or an ally?

The further we go, the more the plots and secrets are unveiled – and the greater the stakes become.

For a long time in this book, I’m flailing without really knowing what’s going on. There isn’t enough world building or character background for me to truly grasp what is happening and why. Even after the 70% mark, when there’s a huge amount of information dumped in there, I’m still guessing and extrapolating more than anything. I’m not sure how the barcodes (which appear to be tattoos and they appear to be born with) give them powers or how much power or what power they give. I’m not sure if there’s a difference based on which god you’re imbued with or whether 2 people imbued with the same god have the same powers. I’m not sure of the power difference between gods and demigods since we see 2 demigods who are more feared and powerful than most gods.

I’m not sure about the writer. Not sure of the relevance of the position of the tattoos. I don’t know why Spencer’s tattoos were bound not sure why the arena and gladiator system exists – I have a vague idea, but I’m not sure. I think it was an alternative to war – but then we go and have a war anyway. Not sure where liminal beings come in at all or where they fit, not sure what dropping into Hades even means – and I’m not especially sure as to the technology and their acronyms that are thrown around a lot to my growing confusion.

And it’s the same with the character interactions. We start the book with a huge rift between Spencer and his dad – but I never quite got why that’s there. Or the relation between Spencer and Michelle and Hannah. We also have Spencer being the moodiest, arsiest angst monster we’ve ever seen – and again I’m not sure why this is. Without a good reason why for the surly teenager act, I was left with Spencer feeling pretty unlikeable to say the least.

There are also a huge number of characters that, despite the large amount of character interaction for the beginning of the book, I had real trouble keeping track of – which was especially hard when one was imperilled. The only characters that felt significant to me were Spencer, Michelle and Kode – so when, for example, Kode’s brother showed up or Spencer’s grandfather, I had to stop to double check who this person actually was. The problem is, menace and even death to some of these people were supposed to be a source of tension in the plot (or at least a source of angst for Spencer) and I didn’t know enough about them to care about their fate.

The book continues in a series of character interactions, lots of conversations, going places, seeing people, occasionally fighting, often training, without me knowing any idea of why or what the major plot actually was. There’s lots of rumblings about Helios but not much else, and Kode keeps killing people without it being either explained or there being any kind of follow up. I came very close to putting the book down in sheer frustration of ever finding out what is happening or why, without ever being given a coherent plot.

And then we hit about 65% of the book and the plot rushes forwards. And rushes is the word. Suddenly we have super weapons and major training and huge amounts of information about the world and what’s happening. We have action, adventure, romance, a plot and some truly epic fight scenes. Spencer comes into his own and starts kicking arse in a major way. It becomes exciting, with a massive amount of information and a lot more exploration of this excellent world. It went from being a book that was perilously close to my putting it down and never picking it up again, to a book I wanted to keep reading even when it got ridiculously late at night. It was epic in all the best ways, it was edgy, it was exciting, there were several life and death struggles, shiny fight scenes and revelations of deep dark conspiracies that have been kept hidden away. There was a big bad boss who was very bad indeed and epicly dangerous and difficult to fight – truly setting him up as a major villain for the whole series.

And the ending was incredible, moving, shocking and completely unexpected. I couldn’t believe it, I read to the end of the book sure that something would happen to change it, some miracle would come in to reset what just happened. It must be one of the most original endings to the first book in a series I’d ever seen; completely unexpected.

Sadly, as I’ve said, there were still things I didn’t understand (and Dennis? I really don’t understand Dennis) nor do I understand Kode – there are too many unknowns for me even in the aftermath of all that power, plot and excitement. But, after all of this I do hope that the next book would fill in a lot more of the blanks and give us the knowledge we need to truly bring this world together and explain the character’s actions more.

There were also a couple of abortive plots – like the liminal beings killing the god powered and Kode revealing some vast corruption about the gladiators which we never really got to see. There was the whole humans rising up against gods and demigods which, again, just fizzled out entirely. Even class analysis with Hannah was somewhat abortive

Most of the characters in this book are POC, it has a vast amount of diversity and works it into the futuristic world as well. We have a world that has drastically shifted from what we know, but the integrity of these characters as POC is still very much there.

There is one semi-major gay characters, a bit part love interest and a disembodied gay hologram. Both the hologram and the character exist to serve – the hologram having no other purpose now (and being conveniently unable to touch people or have any kind of relationship, but he gets to be sassy). The character gives Spencer gifts, helps him constantly and generally acts as a servant while slowly and painfully dying of a degenerative disease. And when Spencer, possessed with the barcode of Apollo, finds out – he freaks out completely. Let me repeat, the guy with APOLLO’S powers, as in Apollo who, depending on what myths you read, had about 10 male lovers, had a homophobic shitfit.

I did like Michelle as a female character, she was fun and made her own decisions and was quite happy to give Spencer grief when she felt he deserved it. While he was more powerful than her, she was always a power in her own right and, due to longer training, more knowledgeable than Spencer and a frequent teacher for him. But it did feel like the majority of the female characters in the book were linked to Spencer as a potential love interest, only Hayley and a villain stands out as an exception to me. I did like Michelle, though and, like so much in this book, I wish I had the chance to see more of her. Sadly I didn’t like Hannah – apparently she’s been the love interest of Spencer for some time and she kept refusing him when he asked her out. But the minute he seems more interested in Michelle suddenly Hannah is jealous and angry? Huh… I’m supposed to see a love triangle here but Hannah was never realised beyond this jealousy while Michelle was such a vibrant part of the book – it seemed very one sided.

In all, this book has an amazingly fascinating world. It’s complex and rich and has a lot of layers and levels that make is excellent to read about. It has a depth that is very rare and a realness that makes it all the richer. But I didn’t get to see enough of it in this book, it wasn’t explained enough and left me frustrated.

Similarly, there are some very real characters with deep, complex emotions and conflicting motivations dragging them in different directions. They have to make hard choices and do a lot of growing as the world is exposed to them. But not enough of this was shown and the characters were dumped on us with little of the explanation of this.

The plot was exciting, fast paced and heart-racing. The fight scenes were beautifully choreographed, the action was riveting and the layers of the plot were revealed to bring us a truly epic conflict in the best traditions of speculative fiction. But it took far too long to reach it and, even then, not enough of it was explained.

In short, this book has the core of an excellent story, but nothing is developed enough or explained enough and it takes far too long to start. I wanted to love this book, but I can’t get past how truly bored I was through most of it, or how frustrated I am by what I do not know.