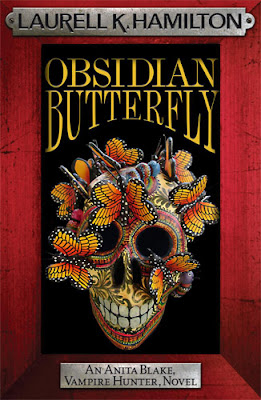 Anita killed one of Edward’s backups – which means she owes him a favour and he has finally called to collect. Or his alter ego has – reassuring Anita that what he wants in New Mexico is nice and legal. And a holiday away from her love life is probably not a bad idea.

Little did she imagine she’d be plunged into Edwards and that the cold, lethal assassin has a fiancée and she has 2 children – all of which have no idea about the man she’s going to marry.

And while the job may be legal – it’s brutal. Dozens of people have been killed or mutilated – and the deaths are some of the worst Anita has ever seen. Worse, it’s been done in a way neither she nor Edward’s erstwhile and experienced back up have ever seen.

Anita has to find and stop the murderer even as the death toll rises. That means facing Aztec gods, a fellow necromancer, ancient vampires and a prejudiced police force – even before she gets to the monster itself, which can feel her looking for it, and is watching her.

The writing style of this book – indeed of this series – walks that line between being evocative, setting the scene and having that fun, snarky, hard boiled internal narrative that I so love and being extremely over descriptive, pointless and dull. Since this book is set apart from her lovers, it pulls it back and goes back to earlier books where it is more for setting scene, theme and mood, rather than us enjoying 20 pages describing just how blue Jean-Claude’s very blue eyes are.

And it really does convey the sense of place. It’s one of those books where you’re nearly sure the author must have spent some time in the location in question because they seem to know it. There’s such a realness to the scene and the area that you rarely get from second hand accounts.

The story also went back to the roots of what Anita does. Police investigation. Finding the big gribbly monster and killing it. Following the clues, enduring the grisly, horrifying crime scenes, trying to find the monster before it causes too much damage, putting life, limb and moral code at risk trying to protect innocent people. We have twists and turns, brilliant ideas and deductions alongside the gruelling police work. It was a great story to read, the plot never made me bored or had me turning away – and as in previous books we have multiple plot lines that come together nicely, bringing in Riker, Itzpaplotl and the Big Bad all in a natural, well paced and inter-related manner.

The only time I felt the story pacing was off was during the long and repeated monologues while Anita considered her own relationships and when looking at Edward’s with Donna. I can understand the latter – but they were drawn out, repeated, and the same message, information and growth could have been shown much more concisely. My only complaint is I feel the story ended with rather an anti-climax

I also liked the building of Edward as a character, finally adding more to him than “man who has guns.” I’ve never particularly liked him as a character – I always considered him to empty, more a convenient walking weapon than any real kind of person. This added a level of depth even though it was a series of masks – and showed something he truly cared about as well as his growing relationship with Anita. It humanised him without damaging his aura of mystery too much – it was well done.

There is a lot less sexual content in this book than there were in previous – yet there are still moments which feel all the more gratuitous and unnecessary because of that – like Bernardo having to strip. And Blade. And Deuce. And every man having apparently had a penis transplant with an elephant or the sexy times with the werejaguars. Nor did Anita have to be seen as a potential sex interest for Bernardo, Ramirez, Red Woman’s Husband and even Olaf. I don’t see this adding anything else to the story and just adds that even the villains in this series must have 14 inch penises.

Anita continues to be a strong, determined woman who does her own things, dishes out shit when deserves, takes the lead unless her respect has been earned, makes her own decisions, refuses to be belittled and can stand toe-to-toe with any other man there. She has some Keille independence, but otherwise is a pretty awesome character. Anita faces sexism, labels it and calls it out – she expects it and has a very realistic and cynical view of what it is to be a woman in her profession and circles.

The other women in the book? Not so much. I’ve said before, Anita seems to present herself as a strong character despite being female, rather than a strong female character.  Donna is repeatedly presented as insecure, fragile, innocent (even Olaf thinks so) and weak – which Anita has to drag her over the coals for. Professor Dallas is petite, tiny – and the whole time we see her everyone, even the big bad vampire, is worried about her being Olaf’s victim. Paulina is dangerous – but we switch to the second mode of attack and Anita analyses how unattractive she is (and insecure about Anita and her husband) and she ends up dead. Amanda the Amazon – yes, I know – is a woman who can fight, but she is described as not only being tall and strong – but only her breasts let you know she’s actually a woman. She’s described in a way that downplays or dismisses her femaleness – and she ends up dead.

About the only female characters who escape are vampires – who have a supernatural EXCUSE for their strength.

The book also introduces one of the vilest characters in the series –Olaf. A serial killer, torturer and rapist who despises women – oh and fixates on women who look just like Anita. Why is this character here? Why is he tolerated? Why didn’t Edward kill him? Why didn’t Anita kill him? What did he bring to the skill set that was so essential it was worth tolerating this man’s presence? Why is everyone treating him being a serial killing rapist as some kind of unpleasant personal habit rather than something that, in this company, should have had him shot 8 or 9 times. I would much rather the exchange have gone like this:
“You will owe me another favour if you kill Olaf,”
“Fine.” *bang*
“I owe you another favour, help me hide the body.”

This would have made me immensely happy.

We also have an undertone of sex shaming, with Anita disapproving of Bernardo’s promiscuous ways and them both adopting the “Madonna vs Whore” dichotomy when it comes to sexual women – or sexual people in general. And Anita’s only concern is making sure she falls on the Madonna side of the equation.

I did like the depiction of pot hunters in this book – and an unflinching summation of why what they do is so wrong and why they are not just minor, harmless criminals. The stealing of this artefacts is done by truly evil people  - and the people purchasing them face some pretty dire consequences.

There are a lot of POC in this book and there are some issues that are addressed: Bernardo being separated from his culture when he was put up for adoption and how, no matter what, he will always be seen as the exotic token. Ramirez talking about how differently he’s treated for being Latino – and how that effects Anita since her being Latina is going to be more noticeable in a place and among people who are actually looking for it. There’s an unflinching  look at the Spanish conquest of the Aztecs and the vampire group in Albuquerque is predominantly made up of POC. It’s actually pretty novel in the genre to have an ancient vampire who isn’t European.

But we do have some dubious elements to say the least – with Anita asking Bernardo some severely personal questions long before she could possibly be considered to know him well enough to talk about them – like his upbringing and making a comment about him using a knife as a stereotype. And she accuses Bernardo of being jealous of her ability to pass – which is all kind of fraught, especially since Anita herself later tells Bernardo she thinks of herself as white (just not “white enough” in some eyes, like her ex-fiancé’s)

There’s little in the way of GBLT characters – but the Aztec vampires do feed by sucking blood from a man’s penis – a scene that exists only to show that some vampires are literally starving themselves and enduring torture for centuries rather than put another man’s penis in their mouth, and to show that Olaf, the serial killing monster, loves to watch people cut and bleed, but is more willing to turn his back to a room full of monsters than to watch said feeding. Oh and for Anita to use homophobic taunting to rile Olaf. We do have 2 powerful disabled characters with Nicy Barco and Paulina – both are strong, dangerous in their own way and people both respect and fear them – but both are villains and both are victimised. But it is active power on their part which is rather unique.

This book is one of the peaks in the series. The story is excellently written and paced, with a coherent plot that relies on neither lampshading nor massive leaps of logic. The world setting brilliantly presented with a small cast of characters that are generally interesting. The book is focused, undistracted, internally consisted and, above all, a fun, interesting read – and highly recommended. This is the book I wish the rest of the series would be. This is the book with Anita at her best – focused, capable, determined and strong. She has grown and developed but still has doubts. She is dealing with her own internalised worry about whether she’s good or not based on her magic and is embracing her powers. She is still burning out from her serial killer investigations and that emotional toll is there, with her, along with her own worry of becoming Edward and losing herself to protect the innocent. But that drive to protect is still there. She is capable without super-powers reaching a ridiculous level and other characters are allowed to be more skilled than her in different areas.

It all just works – it’s not without its problems by any means, but the book works and it’s an excellent read.