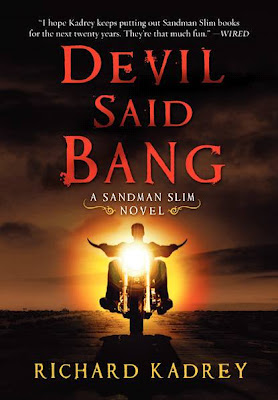 When we last left Sandman Slim he had been tricked by Samel into becoming the next Lucifer and his angel half had ditched him in hell.  This book opens with Stark learning how to be Lucifer and to avoid being killed.  The hellions are not impressed to have a human in the top spot and seek to overload him with bureaucracy because hell needs to be rebuilt.  He taken his ancestor wild Bill on as sort of an adviser but longs to be back in LA.

I am pretty sure that this is going to be the last book in this series that I read.  Four books in, and I still don't enjoy the story and this time, I kept drifting from plain old boredom.  I have zero investment in Stark, who cannot figure out whether trouble comes to him, or he finds trouble everywhere that he goes. His sarcasm, if one can even call it that, is puerile and his behaviour is the equivalent of a bull in a china shop.

He seems to float from one disaster to another in his attempt to save the world.  I really enjoyed the first book in this series but since then, it has been nothing but a series of disappointments.  It is really sad because Kadrey has built what could have been an interesting world.  God is not the God that we understand him to be, nor is he the creator of the universe.

Honestly, I don't have much to say about this novel except to say that I a glad I am done.  I very nearly did not finish.  Stark just seemed to meander from place to place with no real point or destination.  The conversations were stilted and that is particularly true of any scene involving Wild Bill.  It felt like Stark entire mission was to walk around and appear as bad ass as possible. If after four books the protagonist has not developed any complexity or nuance it is quite simply never going to happen.

Normally we give really detailed reviews on Fangs but this book inspired nothing in me.  There is nothing I can say about Devil Said Bang that I haven't said about every other book in this series.  I think Kadrey and are simply going to have to agree to go our separate ways. Meandering through a weak plot so that we can get to a fight scene does not excite me.  In fact, it seems that this is all this series has ever been, and excuse to get to the fight scene rather than to tell a good story.