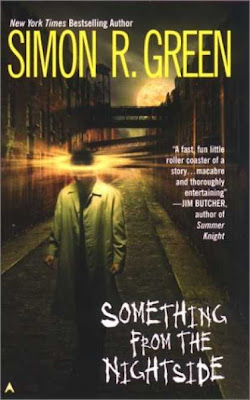 John Taylor is a private detective. And not a very successful one, given his mounting debts and declining business. He used to be very good – 5 years ago when he was still in the Nightside where his ability, to be able to find anything, actually worked.

But the Nightside is a dangerous place, where literally anything and everything can exist. Wizards and aliens, monsters and demons, ghosts and gods – anything imaginable is in there somewhere; and John is well clear of it.

Except he has a client who is willing tom give him an awful lot of money to find her daughter – in the Nightside. Against his many reservations he finds himself plunging back into this fantastic world, the dark underbelly of London, to face old enemies and old allies, from the sinister to the sublime to the ridiculous. The investigation is dangerous, horrifying, fantastic and macabre, with new revelations even he never imagined, and a threat far greater than he expected. But it does feel like coming home…

This world is one of the strangest, deepest and weirdest I’ve ever come across. Everything you can imagine – absolutely everything – can exist in the Nightside. From aliens and their abductions to gods, to extra-dimensional entities to ghosts to the fae to werecreatures to everything else imagineable. There are timeless pockets where you can drink old style Coca-cola in an eternally 60s café, there are dark and dangerous streets where even the architecture will eat people. There are cars, carriages and other conveyances that will eat people and old hansom cabs pulled by talking horses.

This book has some amazingly fun characters. John Taylor himself is a hard boiled detective with all that means – the good, but very little of the bad. We hear some of his past, enough to make him interesting, menacing and a bit scary, but not enough to destroy his mystery. He is a bit of a Gary Stu in the way everyone is in awe of his power and reputation and his power does have some severely extreme applications. But he also has his considerable limits and there’s a suggestion, at least, that part of his reputation is inflated. It is a powerfest though – but that can be fun. I also appreciate a character with a good grasp of quips and sarcasm.

The writing hits that perfect balance for me when it comes to pacing. Even though it’s quite a short book, the descriptions and exposition are vivid enough to give a strong sense of place – which is especially important when we have a world that relies so much on its alien, fantastic quality. But it isn’t bogged down or distracted, the action keeps coming – never in an overwhelming fashion (the characters themselves actually get overwhelmed and need a break) but event after event, each balancing the description and the exposition and every one of them having some kind of plot. Whether to introduce clearly important characters, to establish a meta plot, move the main plot forwards or provide essential world explanation, every part of this book is necessary. Because of that it doesn’t feel short, it feels concise – just as long as it needs to be.

However, the writing is probably a taste matter. For me it hits the balance and fits the hardboiled detective theme – it is dramatic, even overwrought at times but I think that fits the subject matter. I enjoyed it, but I can see why others wouldn’t.

The story itself is fun but relatively simplistic along its rails – what you’d expect from many first books - there’s the plot that is interesting (and has a totally unexpected twist at the end), introductions of themes and metaplot I can see lasting the whole series (his mother, the authority) while mainly being concerned with introducing the cast of characters and letting us explore the world. This book is an excellent foundation.

Inclusionwise it was sorely lacking – especially for a book that was supposed to be not just about London – but London plus. The cast was extremely white and the only GBLT representation was a passing reference to two lesbian bouncers who had no speaking role. It’s a shame that a book that is so driven to show the vast variety and wonder of the Nightside can’t show us the actual diversity of humanity.

The book is painfully aware of class, though, with the poor, destitute and the desperate being clearly vulnerable and expendable in the eyes of the authority. One of the issues that spurs Taylor back into the Nightside is his own desperate need for money. The powers that be, such as they are, in the Nightside are quite happy to annihilate an entire street of poor and destitute so long as it will remove a threat. And they only considered that threat to be worth acknowledging because it had started taking victims who weren’t so “expendable.”

We have an interesting female character with Joanna in that she is a woman of many layers and complexities. Strong and hard, but not immune to the horrors of the Nightside. She is determined, she and Taylor but heads. She concedes grudgingly any kind of leadership. But, of course, Taylor is the leader by his own experience and he does have to rescue her – though, in turn, she is the one who rescues him by chivvying him to keep going when he has given up. Both of them collapse and both of them stay to help the other when they could have escaped.

Shotgun Suzie (AKA “Oh Christ it’s her, RUN!”) looks like she could be a very very very fun character indeed – for pure cheesy action value if nothing else, but at the moment, she’s a shotgun.

This book is fantastic, it’s exciting, it’s fun. It’s also gritty and dark and more than a little grim in places. There is a lot of horror, a lot of wonder and a whole lot of random happening because so much is possible. But Taylor is the only character who is actualised, everyone else is just a name and the world is broad – with a whole lot in it, but it’s not deep. There’s just everything and anything there, but not much of a nod to the why or how. Things just are which, in itself, leaves plots somewhat shallow (though, again, that was an interesting twist at the end) simply because so much can be summed up with “it just is”.

There’s also a few scenes that border on joyfully cheesy – and I’m happy to have a bit of cheese and it’s extremely well balanced by the grim darkness elsewhere. I can’t say this book is deep, nuanced, complex or even serious because it has an action adventure feel to it with that over the top awesome sense, I love. But I can’t say it’s fluffy adventure because it has a grimness beyond that. There is an element of the cartoony, though

It has 2 powerful sides – the light, cheesy fun of Shotgun Suzy and the grim darkness of Razor Eddie. The two aspects of the book really work well together without conflicting – which is a really skilful balancing act. It leaves me wanting to reads the next book to see where this series is going – the cheesy, fun and slightly whacky hijinks or the grim, gritty and slightly horrific darkness.

I have to say I liked this book a lot – maybe because of that balance, maybe because I liked that overt the top cartoony epicness now and then, maybe because I’d read a string of bad books and this seemed above. Ultimately, I’m giving it 4 fangs because I enjoyed it more than those books I’ve given 3.5 fangs to. Yet I’m justifying it because I can’t, in all honesty, explain why I enjoyed it to a 4 Fangs degree which is not normally a rating I give out casually