Review: The Book of the Forsaken by Yannis Karatsioris 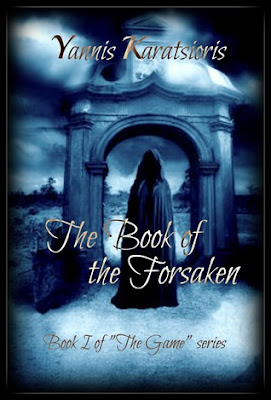 3 men, 3 exceptional men. One can remote view and control fire. One can teleport. One can do all kinds of dark and dangerous things – and uses them to horrify and even kill. All 3 of them lead very different lives – but all 3 of them are brought to Moscow, 2 of them to kill and 1 of them to steal

Yet it becomes clear that all of  their tasks are linked – and there is a grand conspiracy they don’t even see and the book they have stolen is in high demand. Told through the eyes of a sarcastic being that is playing a game all of his own, we see them cross Europe, travel through time, discover vampires and monsters, magic and shapeshifters and who knows what else –all for the sake of the Book which could change the world.

This book has a style I think you will either love or hate. It is told from the point of view from a seemingly all knowing narrator, with immense powers who has no wish to share what he knows – and only nudges things along. He is sarcastic, occasionally given to tangents and funny foot notes and a lot of wry commentary. Some of it is immensely amusing and massively funny. Some of it… isn’t. I think it was generally more funny than not and, on the whole, I liked it, but I can also see how it can be annoying to others. The actual protagonists are manipulated puppets to begin with who slowly start to express themselves onto events, going from following instruction to setting their own path and deciding to make the story their own – rather than a story someone else is telling ion which they are used. Maybe… because they’re still being poked and prodded by outside manipulators, even when they seem to be setting their own path, it’s clear they’re being influenced and as the book progresses we begin to see how wide that influence is.

In a way this is how the unusual storytelling method works – because we get to see the wider world beyond their understanding and the way their strings are being pulled – while at the same time not having an omniscient narrator infodumping everything.

The characters themselves are… odd, rather unique. Robert is a crude, drunken ex-convict who is generally unpleasant but has just enough charm to prevent him from being completely unlikeable. Daniel is collected, refined, well read – but cowardly and timid, prone to crashes of self-confidence. And Igor is sinister, dark, deep but inclined to be amused by situations. Despite them all being rather non-endearing, I like them. They have personality, they have substance. Despite that, they’re not pleasant people – 1 of them is a thief and 2 of them are murderers and none of that has been addressed, called out or challenged, yet who would in the circumstances? It’s a testament to their character that these unrepentant murderers are still pretty relatable, even if it does make me question the realism of the story – especially with Robert killing on a stranger’s instruction.

I liked the story – these 3 people brought together in Moscow for seemingly different, nefarious purposes which ended them all thrown together and hip deep in all kinds of problems and completely lacking any kind of answers – just knowing they’ve hit something big. And just when I thought it was getting convoluted that these 3 didn’t just walk away having no personal stake – a personal stake was introduced, something to keep them hooked in.

While I think the pacing of the main story is good, I think the pacing of the world building is not. We have the all knowing trickster narrator who has an agenda and for much of the book we see the three main characters stumble through not knowing much of anything.  Then we reach one point in Romania when a vast amount of world building is dropped on us extremely quickly and we have an action scene that is fairly closely linked to it. It all happens so quickly and followed by more plunging into the utter unknown that I found myself rather lost. I thumbed back and forth re-reading to try and get all this information into my head at once. I think if the information had been paced more or even select parts of it repeated, I’d have had a better idea. As it was I could only just about follow Igor’s plans and I’m still not entirely sure where the Upyri and Magi stand, the Ordo Draconis or a great deal other matters. I have a rough idea, but I’m not sure.

Similarly, the end of the book suddenly had a whole new character, a new concept and a new story that seemed linked to the rest but I wasn’t entirely sure. It seemed like a whole new story and wasn’t sufficiently linked to follow for me. We suddenly lost the 3 main characters and the entire story to track on a new one.

Inclusionwise this book doesn’t come close to being decent. There are no women characters- just enemies and bit parts – and most of the women in the book is referred to in a sexualised manner. The only GBLT reference are 2 women referred to in passing in an orgy room. POC do little better largely bit roles. The late appearing character at the end of the book is half-Japanese, and we’re reminded of it a lot with continual references to his heritage and how it makes him polite and unable to say no. Daniel, one of the three protagonists, is half-Rroma and this is referred to, referred to in reference to unfair prejudice he expects as well. However, he never knew his Rroma mother so, while completely devoid of stereotypes, he’s similarly devoid of social cues.

I finished the book still rather unsure as to what is going on and why. I have an idea and I think it may be one of those books that will benefit from a second reading to try and slot all the fact into place. I am left intrigued more than completely lost, but I am lost – it’s definitely a hook for the next book, But it also left me frustrated and lost – and I sense that if I don’t read the second book soon I’ll be completely lost because I will have forgotten the world building of the first book. I am intrigued, though, definitely intrigued.

A copy of this book was provided by the author for us to review
Posted by Sparky at 3:00 PM