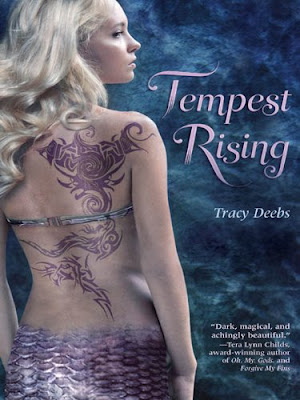 Tempest has a boyfriend who really adores her, a family that supports and loves and her and has the ability to spend her free time doing what she loves most - surfing.  At almost 17 years of age the world should be filled with adventure for her but instead her seventeenth birthday represents a date with destiny that she would dearly love to avoid. On her 17th birthday Tempest will have the choice of becoming a mermaid and following in the footsteps of her mother, who abandoned her family six years ago, or stay on land and live out her life.

Though her father has told her repeatedly that there were complicated reasons why her mother left and that he bears her no ill will, Tempest is filled with feelings of extreme anger. She does not see becoming a mermaid as an incredible gift but an excuse to abandon one's family.  No matter her desire to stay human, the sea constantly calls her and there are times when she is sure that the intent is nefarious.  In the sea a selkie named Kona waits for her filled with nothing but love for her and on land there is the steady and every so human Mark.  So not only is Tempest drawn between land and sea but to men who care for her.

Tempest Rising in not an inclusive story whatsoever or even remotely progressive.  Tempest worries about how her brothers will be treated when the come of age as mermen because the mer society is matriarchal and apparently males of other species give mermen a hard time over that.  The women are supposedly revered but from the conversation between Kony as his brothers it appears that their appeal is not their power or skill but the fact that they are attractive.  The characters largely read as decidedly White with exception of Kona who could potentially be a of pacific Asian descent but this is a guess based loosely on his description. There are no GLBT characters and no disabled people.  It always amazes me when authors prove they're imaginative enough to create a world different from our own, but somehow cannot take the leap far enough to make their stories inclusive.

The storyline was fairly simplistic even for a Y.A. paranormal story.  Though Tempest had known Mark for years, in the end she cannot fight her attraction to Kona who she had only known for a few days.  Of course, Deebs uses woo woo to justify the attraction and the all too soon declarations of love.  I do however have a problem with Mark's character, though Deebs tried to frame the problems in Tempest's relationship with him around her inability to open up to him, his jealous and possessive behaviour is what Tempest really should have a problem with.  There were times when Mark would touch her when it was clearly not a sign of affection but a declaration to others that Tempest was his property.  Tempest was constantly on guard about not upsetting him, or giving him reason to be jealous.  At one point Tempest even has to worry about Mark getting into a physical altercation with Kona because he is jealous.  When Tempest disappears for two weeks, suddenly Mark is checking out cheerleaders.  A man like that should not have been framed as a good boyfriend and in many ways he reminds me of Edward from Twilight.

We are told that Tempest is 6 feet tall and absolutely beautiful, the problem of course is despite the fact that boys are clearly attracted to her, Tempest does not see herself as beautiful and she lacks confidence outside of her ability to surf.  Tempest's feeling of insecurity are particularly strong every time she is in the presence of another woman because everyone else is instantly more beautiful.  I know that a lot of writers do this, but that does not make it anymore likeable or interesting.  Can we please stop with the conventional beautiful women being insecure about their looks.  We were told that Tempest is college bound and is in fact taking several AP classes and is interested in art, but these character traits were treated as secondary, because her inability to see herself as beautiful was for some reason deemed far more important to focus on.

Another annoying factor with this story is the fact that despite the fact that her world is falling apart, kissing Kona makes all her troubles disappear.  In fact, Tempest is pretty easily distracted the moment a hot guy enters the room.  She is also incredibly moody shifting from being concerned about her family to practically forgetting they exist when she is Kona and in merwold - yes, I am calling it merworld.  I guess what I am saying is that I really did not like Tempest as a protagonist and it didn't help that her name is completely unoriginal.

From start to finish, I don't believe that there were any surprises in Tempest Rising.  I do however believe the story should have been shifted underwater a lot sooner than it did. I think it would have lessened the time that Tempest had to angst. Tempest is supposedly a special snowflake that will decide the fate of good and evil and yet we weren't really given a compelling reason as to why beyond her parentage.  She cannot be the only half mermaid child in existence so this made her elevation plausible, but highly unimaginative.

In the end, Tempest Rising isn't new or imaginative but it is an easy read. With the exception of  big confrontation with the antagonist, the story really flowed.  It's the kind of book that one sits down with to waste the day away without being challenged or learning anything new.  It's not original or particularly entertaining but I have certainly read worse and hey, at least it had mermaids right?