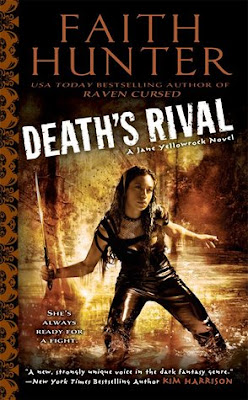 Vampire Masters of the City across the US are being afflicted by a plague. Which should be impossible – vampires are immune to disease. Yet Sedona and Seattle have both been afflicted – and when in their weakened state, they were threatened with take over. Both cities now look to a new, unknown master. And to make it even more worrying, some of Leo’s own vampires are being afflicted with the disease.

Time for Jane Yellowrock to do some investigating, using her new team to track down how the disease came about, where it is from, how it is being transmitted – and, ultimately, who is behind it. But the mystery vampire has far more than the disease at his command and Jane quickly finds herself under attack – and Leo facing a fullscale war; all complicated by there being a spy in the ranks.

Through all this, Jane’s secret Skinwalker identity is yet further frayed, even as more of her forgotten past emerges and she has a painful reminder of how difficult and dangerous it is to get involved with vampires – even vampires she thought she could trust.

I loved this book, it seemed to get just about everything right with the balance.

The story is an excellent mix of action and investigation. The unknown enemy spreading disease isn’t a force they can just take down nor is it something they can just hunker down and defend against. It’s not a mystery since there are no clues we’re expected to follow, but nor is it a series of loosely connected fight scenes. There’s a plot to follow, a nice, tense tracking down of the clues while trying to protect themselves all of which has the added complication of there being a leak in Leo’s organisation. The pacing was excellent, there was no down time even when Jane was exhausted, the plot didn’t get distracted or deviated and at no point did it start to drag – which can be a problem with mysteries as the questions build up and there’s no concrete actions to take or answers given. Instead we had solutions and answers, appropriate red herrings and show down moments, clever plans, interesting plots and a chance to truly see the new characters introduced.

I also liked how much the emotional impact of what was happening wasn’t downplayed. Jane has been through several losses of friends and that still haunts her. Trauma leaves her shocked and stunned – even in shock. Killing people, torturing people bothers her and preys on her mind. They’re not just downplayed events that just happen and they move on, but nor do they require chapters of self-pitying angst as well. It’s a nice balance and really well executed.

I liked the character development and interaction- Jane realising how she sees things differently since working with the vampires, in particularly how money has affected her. Going from having to count the pennies to being able to casually lay out large sums of money – to Reach, for plane tickets, to fund her 2 new employees. In turn that reflects on her willingness to keep working for the vampires even when she has strong reason not to – because can anyone underestimate the value of such financial confidence?

The way the supernatural touches Jane has also developed – I love the way her secret being revealed is being handled. She is trying to hodl what secrets she can and not having a big reveal moment, but nor is she trying to pretend to be fully human when it’s blatantly obvious to everyone that she isn’t. She isn’t happy with her skinwalker status being more known, but she’s not whimpering and trying to put it back in the bag – she’s living with it and making it work for her.

I do not like Jane’s love life, I’m afraid. She is collecting love interests (Bruiser, Ricky, now Eli and possibly Leo). I wouldn’t necessarily be against that if it didn’t come with lots of unresolved sexual tension (please just have sex with Bruiser and be done with it, please, please), lots of angst (you and Ricky are not an item any more. This is sad. Moving on…) and, worst of all, the fact that Jane’s brain completely switches off. They were in the middle of a fire-fight during which Jane didn’t fire a single bullet because she was busy being mesmerised by the sexiness of Bruiser. She zones out during conversations and gets distracted - it doesn’t bring out a fun an interesting side of her. It is, however, much better than in Raven Cursed where she could lose time over her love life.

I also wish Jane hadn’t lost all of her female friends. The only woman she spends any time with now is Aggie One Feather and her mother – but they’re mentors she goes to when she needs to, not friends or peers. She used to have Molly and her sisters and she used to have Jodie the police detective – but they’ve all fallen away. Throw in her instant dislike of Soul for being a woman stood too close to one of her men and it’s beginning to look very trope-laden.

And thus ends the problems I have with Jane – because I love this character. She’s fun, she’s amusing, she’s a classic hardarse in all the right ways. She’s a fighter and a thinker, spiritual and practical and, when romance isn’t in the air, she bounces off each other extremely well. She and her team already are a great, fun unit as is her working with any of the Blood Servants. She’s a really good character and a really real character who passes my litmus test for truly identifying with a character – I can get angry on her behalf, when she is wronged or abused, which means the character has really struck true. The only interaction I didn’t like was how easily she let Leo off the hook for trying to bond her, but I suspect consequences may be coming in later books. Jane’s also a wonderfully complex character, trying to fit the parts of her identity and morality together – believing in harsh justice and vengeance yet, at the same time, painfully feeling the guilt over the deaths she’s caused, no matter how deserved. She has a strong sense of responsibility which, at times, strays into her feeling guilt for things she shouldn’t, but it’s a really strong drive for her character.

We have a lot more in this book about Jane’s past as more of her memories return to her which also mixes with her fear of what can happen to Skinwalkers as they get older. I’m not an expert, but there seems to have been some research that has gone into Jane’s Cherokee culture and history – as well as an adamant refusal to treat Native Americans as a homogenous body. There’s a lot of unflinching references to the atrocities committed against Native Americans as well as an equally unflinching acknowledgement of racism and how the quaint, historic, antebellum towns they pass through are built on slavery. There’s no whitewashing, no glossing over, no romanticising.

There were a lot of POC in this book aside from Jane, Aggie and her mother. Ione of the Outclan vampire priestesses is Black, most of Derek Lee’s forces are POC, including Derek Lee himself as are several of Katie’s employees and Eli is mixed race. It’s nice to see a truly large amount of inclusion with numerous POC characters including both the protagonist and several significant minor characters, especially given the location.

There was only one gay presence  in this book (I won’t call him a character, he appears, is sassy, then disappears) and he was described as “gayer than an entire line of chorus dancers” which pretty much sums up all the character is and how he is written, thankfully, he only makes the briefest of appearances.

All told, this book was pretty damn excellent. There are moments I don’t care for – Leo needs to get his after what he did and Jane’s love life needs to stop turning her into a useless, confused mess – but other than that I loved it – the characters, the development, the story, the pacing, the history, the world and at least some of the inclusion. Another excellent book in a series that goes from strength to strength.

A copy of this book was provided by the publisher through Netgalley. The book will be released on the 2nd October.
Posted by Sparky at 3:00 PM