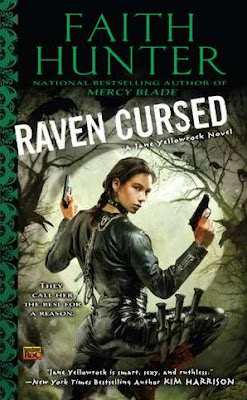 Jane Yellowrock has a job from Leo Pelliser, Master of the city of New Orleans and, as it turns out, Master of the whole South-east of the United States, meaning he has far more oomph than Jane imagined.

He has sent her to escort Gregoire, one of his top vampires, to negotiate with the local vampire Shaddock who wishes to become Master of Asheville on account of his children becoming vampires super-quickly without decades of madness. It’s an important bodyguard job and Jane is focused on it and in charge despite the distraction of Rick, her sort-of-boyfriend turning into a wereleopard.

Unfortunately things are complicated by the remaining werewolves from the pack she destroyed in the last book seeking revenge – and by revenge that means slaughtering people in her area. Jane is forced to work with local police to find the wolves, balancing law enforcement with orders from Leo who wants them dead as soon as possible. Jane has her own reasons since Molly and her family (and coven witches) are in the area –Molly’s husband blames her for putting their children in danger, Jane cannot stand the idea that she has put them at risk again

But even Molly’s coven isn’t a source of peace – with it being betrayed from within with dark magic, old secrets and an ancient evil being summoned at the heart of it – an evil whose influence is making all Jane’s jobs that much harder and that much more complicated.

This book was overwhelming. There was a lot happening – with the parley talks, lethal werewolves running around killing people, the Grindylow apparently with its own agenda, Kenmebi both mentoring and threatening to kill Rick, the rogue vampire to hunt down and, of course, Evangeline playing her own game. At times I was almost lost, I kept wondering what plot line we were on and where we were going and why. Usually, such a book annoys me, I wish they’d remove a plot line so the story would flow better, there wouldn’t be so many distractions and I wouldn’t feel like I had to take notes to try and keep up with everything. But not in this case. Yes it was overwhelming but it was equally clear that it was meant to be. As Jane bounced from crisis to crisis, slipping sleep, desperately trying to fit everything in – this was one of the themes of the book; exhaustion, stress and constantly have to run to keep up with everything – and everything being too important to just cast aside or even realistically delay. It makes for a very strong part of the book, being very sustained and well balanced. I was overwhelmed, but I wasn’t lost.

I also like how the storylines come together – it adds the plausibility of not having everything just spontaneously happen at once and prevents everything in Jane’s life happening in complete isolation. It is very well done and doesn’t feel even remotely strained or convoluted – it flows naturally and it’s also completely and utterly unpredictable. I didn’t see the ending, I didn’t see what was happening and discovered everything as and when the characters did – the mystery was mysterious and the confusion was natural and shared with the protagonist.

The pacing was excellent, I was never bored and it never dropped and got lost. The action scenes were well laid out and described – nothing was too rushed or dragged. Everything was described appropriately – it was a very well balanced book, really well written and never once made me want to put it down.

We’re opening up to see more of this world – including expanding on the Grindylows, the little green police of the werecreatures, some more on the werewolve’s curse, a lot more on how witch covens and witch magic works which I was desperate to know and a lot more knowledge about Molly’s family.

I’m also extremely excited by the number of new people who have learned about Jane’s Skinwalker-ness – hopefully this will develop into a lot of fascinating plots in the future. That should be fun especially linked to her increasing embroilment in vampire politics.

Jane is an interesting character, in charge and defiant without having lashings of Keillie Independence and an investigator without spunky agency.  In general, I like her, she’s fun,  capable, human and her interactions with Beast are a great edition to the story. She does have an overdeveloped sense of guilt and responsibility – which can be an interesting character trait and character flaw more than anything else. It makes her an interesting and complex character that she does feel responsible for thing that she is, at best, only tangentially to blame for (if that.) I don’t agree with her guilt – but I do like how it adds texture to this character, especially on the context of someone who is fighting with her own moral compass. This is not a heroine who just kills people and moves on – she is torn up about killing blood servants and trying to find how this fits in with her own conscience and beliefs. I think this is going to be an interesting conflict if it is well developed so

What I don’t like is Big Evan’s willingness to blame her. Partly because it’s unfair and unduly harsh but she’s also utterly denying the agency of his wife in the last book – did their children end up being put in danger? Yes, but it was as much Molly’s decision as ever it was Jane. And blaming Jane for the thieving and murdering of Evangeline is ludicrous. I want to like the character of Big Evan but he’s going to have to do a lot to redeem this.

I am not fond of what relationships do to Jane’s usually sensible, bad ass brain. At several points while playing bodyguard, Jane’s attention wanders while she is contemplating her love life. She actually misses huge chunks of the conversation while she’s navel gazing. It looks unprofessional to say the least. In fact, the romance sections of this book in general frustrate me – make it happen or don’t but the circling is tiresome. Jane is also turning into one of those characters who tells us repeatedly that she’s not beautiful while everyone else is shocked, SHOCKED, that she doesn’t see how drop-dead gorgeous she is – it’s getting to be a tired trope.

There is also an interesting theme being raised about lack of faith – especially since it can cost you your guardian angel, so lack of faith has a real tangible consequence. I’m very wary about where this is going though, especially since Jane is concerned about her faith as a Christian while at the same time reaching for her beliefs and traditions as a Cherokee – which becomes even more shaky when we consider that the Cherokee demon was banished, in part, with the aid of an apparently Christian angel. There could be a lot of interesting things developed here, but equally it could be a very fraught path as well with the belief systems being put into conflict. I would like to see more development of her Cherokee history – I had hoped for more in this book, but there was still a powerful insight into history without being appropriative but still grasping the full tragic power of it.

Inclusionwise we have GBLT people who are revealed by past exposition, which seems to be a theme in these books. We have bisexuals who have had same-sex relationships in the past (we’re told) but not right now (now they’re largely focused on Jane).  This has been an ongoing pattern and shows a willingness to “tell” GBLT people but a reluctance to “show.”

We do have several POC. First of all, obviously, is Jane who is Cherokee. We also have several side POC and Kenmebi, a black man. I liked how he appeared in the previous book but he’s lost some ground here. Last book he lost his mate and is currently grieving -  but I don’t like how Kenmebi’s grief was portrayed – I’d have been happier seeing more grief rather than him looking more like a lazy, angry drunk who they occasionally dragged out to save them. I think it was a missed opportunity to develop the character and bring more were knowledge to the series – as well as avoid the unpleasant black stereotypes that dog him. A lot more could have been done with this. Derek is a more fun character but he plays a much more minor role.

All in all, a well written, well paced book with a compelling mystery and exciting action scenes, all carried by a human, well developed and powerful main character I desperately want to learn more about. I look forward eagerly to the next book, with only a little trepidation on some shaky areas