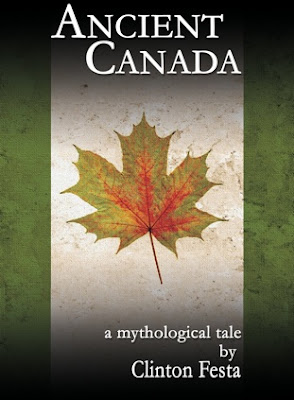 “Ancient Canada is a fantasy epic and a story of mythology for an alternate Canada.  Because of her unique ability to see life and death, Lavender is exiled from her home.  With the help of her sister Marigold, she survives in the wild using her gift.  The two encounter various characters and creatures along their journey, not all human and not all friendly.  Each chapter is narrated by one of these characters or creatures, sharing their personal story as well as their encounter of the two sisters.  Together the chapters link to bring Lavender and Marigold’s epic, the mythological story of Ancient Canada.”

This book is fascinating in many ways and the author has an incredible imagination. Set in an ancient land of semi-medieval technology, it resembles fantasy more than anything, while there are shreds of our world there, especially in the names, the world is extremely different from ours.

From Lichen to the feathermen, there is a lot of creativity here. We have a vast array of characters and creatures that largely dodge previous stories and patterns we have seen over and over again in fantasy. Lavender’s gift is also pretty unusual – not least of which because the power creep that is so common was resisted. Yet, despite not expanding her powers to control life and death, we still see a lot of very creative uses for it – from writing their book about poisonous food, to using it as a guide for safety, avoiding those paths where her death is imminent in favour of safer ones. It’s a unique way to give someone the limited ability of a Seer.

This is also a book that analyses a lot of issues (albeit not in a way that I found ideal). We have in depth discussions on the nature of evil, on passive and aggressive personalities, on ways to negotiate a homogenous culture when one is Other, on class, on welfare, on being fat, on sexism, on privatisation vs nationalisation, on mental illness, on freedom, on selfishness and self-perception, on self-worth, on the value of diversity and many more. Every story had at least one intense debate or examination of one of these concepts and more besides. There’s a lot of deep thinking in this book and a lot of urges to think as well – it encourages the reader to explore these concepts and follow the character’s paths.

Marigold and Lavender also work extremely well together. Lavender is overly serious, but Marigold is fun and often hilariously funny, adding a lightness to the book (albeit, also adding considerable, inappropriate distractions as well).

The story is as much a story of the world as much as it is Lavender and Marigold, with many of the chapters focused on the countries and cultures and creatures within it rather than just their story. It was a sight seeing tour in many ways – occasionally creating redundancies and distractions, but serving to show case these lands and the debates that arise from them

The problem is that this book has a writing style I don’t care for. It is over-written, it may be the most over-written book I’ve read – and I’ve read Dickens. The most glaring of this is the descriptions – things are described in incredible, and unnecessary, detail; people talk in extremely over-wordy and stilted fashion, conversations more a series of speeches delivered to each other. Frankly, the book is over 700 pages long and could quite possibly be halved without loss.

The story isn’t told from the point of view of Lavender and it’s rarely told from the point of view Marigold. As the description says, it’s told from the point of view of people they meet. In many ways the story resembles a series of short stories in which Marigold and Lavender just happen to take part (sometimes in a very minor fashion) – indeed, in some of them Lavender and Marigold seem quite superfluous to the plot. But if the protagonist is superfluous to the chapter – then perhaps the chapter is superfluous to the story? There were some of these short stories that sought to tell the story of the character newly introduced but did nothing to advance Lavender and Marigold’s story. There were some which focused entirely on Lavender and Marigold – but even they spent an inordinate amount of time on their backstory and introduction giving us vast amounts of information that didn’t advance the plot one iota and served only to develop a character that, 20-30 pages later, would never again arise in the book. Lichen’s extremely long history, the children with the musical bird, Simon’s story (and retelling Simon’s story through Marigold’s eyes) and retelling Sanna’s story through the Prince’s eyes all seemed completely unnecessary – and that’s but a few.

An equal offender in the wordiness department are the constant Aesops. I’ve mentioned the many issues that are examined in depth – which I have no problem with. I do have a problem with how they are examined. Some of them are explained through vast info-dumps as a character engages in solo introspection (such as Sanna musing on the nature of active, task-orientated people vs passive, people-oriented people or Tubold on the nature of evil) which feel like lectures- I’ve actually had lectures at university that were less didactic. Others are explained through debate between 2 characters – but so often in a setting that renders the debate almost funny – a military commander and soldier out in the field debating on the nature of burden to society, Marigold and Lavender debating with Lichen – the giant rock monster, they’ve just met and they’re having a philosophical debate? And then there are arguments – someone decides to argue their point, but they usually come across as someone plucking an ancient Greek philosopher and setting him against a bull (or a straw man). The bull shouts and screams and raves while philosophy is thrown at them over and over again. It’s made all the worse by the screaming and raving one often being in a position of supreme authority – Polaris (supreme dictator of Canada), King of Svald, the slave master. In all cases these people had the power to not have this debate – yet they tolerated sass and challenge from two teenaged girls? It feels extremely unrealistic – the plot, world and characters are all bent and twisted to squeeze in these debates. Not just once, but I’d say a good dozen times throughout the book. I also question how Polaris can be the supreme religious, civil and military ruler of Canada for 500 years and be unable to converse beyond the tone of a petulant 5 year old – this turned the enemy into a straw man for me.

These were all fascinating and interesting questions in their own way – but they belong in a philosophy or sociology text book and were glaringly out of place here, derailed the plot (though, I do rather think the plot existed FOR these debates as much as anything). This book lectured me – it didn’t show issues, it lectured me on them. Coupled with the wordiness in general, it made this book hard to read.

So hard that I couldn’t finish it. I got to 85% reading at a fraction of my normal pace. I was forcing myself to read it and, frankly, if I hadn’t been part of a blog tour on this book I would have DNFed it long ago. I think I would have put it down around the 50% mark, if not sooner. I feel almost like I am being unfair to other books I have DNFed by giving this book the time I did simply because I pushed on for far longer with this than I have tolerated with them. There’s a lot of good here, but the framework doesn’t support it, there’s too much eagerness to push grossly unsubtle morals and Aesops than there is to actually tell a story. This book could have been truly excellent – but it is sorely in need of an editor and desperately needs to show, not tell.

It had happened. Simon had seen his second child.

Quietly and peacefully, she opened her eyes, quite soon after birth. Perhaps the brilliance of the sky overhead opened her eyes itself, and if so, it was our first indication that she had the ability of sight.

“I’ve never seen that color before,” said the medic.

“Nor I,” said Simon. “They are clear, not even murky, as Marigold’s when she was first born.”

“Are those truly purple eyes, or is that just an effect of the Lights?”

“No, they are genuinely purple. Or maybe a sort of violet.”

“Or maybe Lavender,” spoke Simon. Once I told him what the peddler had said earlier, about the lavender I traded from him, we agreed on her name. I did not expect the color to be her permanent shade, but to this day they are identical to when she first opened them.

Clinton Festa, raised in Rockland County, NY, is son to two educators and grandson to four.  Clinton studied animal science with the intention of pursuing a doctorate in veterinary medicine.  However, after graduation Clinton began flight training and has worked in aviation for the last ten years.

This tour was put together by FMB Blog Tours
Posted by Sparky at 8:00 AM