Review: The Golden Lilly, by Richelle Mead, Book 2 of the Bloodlines Series 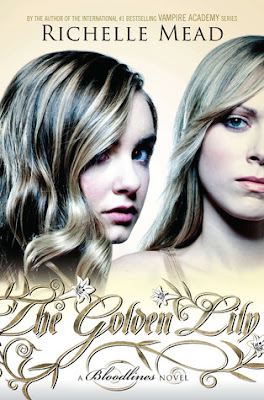 Sydney has been commended by the Alchemists for being so very loyal to their cause, exposing the wrong-doers and dedicating herself to keeping the threat of Moroi and Dhampires from the poor humans. The problem is, while she follows her duties to the letter, she has made very strong friendships with several Moroi and Dhampires – she is uncomfortably aware that, from the Alchemist standpoint, she is a traitor.

And it’s something that becomes ever more complex as her friendships grow and deepen and she becomes involved in the Moroi experiments to permanently immunise people against becoming Strigoi. While the Alchemists approve of them, the idea that they may involve her goes against her own beliefs and everything the Alchemists have taught

Things are not simplified by the appearance of the Vampire Hunters – humans who hunt and kill Strigoi but have nothing but contempt for the Moroi. While their methods are extreme, their philosophy is not that far from that espoused by her own Alchemists

And then she has a teacher who is pushing her to learn magic, against all of her beliefs – and against the principles of the Alchemists – though she can’t deny the utility of it. Then there’s the complications of her love life as well.

The story is much better paced than the previous book. With that as an introduction we’re thrown into the major conflicts from the first page. The actual major part of the plot picks up around 40% with considerable groundwork being laid beforehand. 40% is a little late still, but this is in part because the daily school life and foundation for the characters that was laid in the first half wasn’t overly interesting to me. The relationship dramas of Jil, Eddie, and even Sydney didn’t fascinate me, nor did the problems Angeline had with the school authorities. This did make the first 40% somewhat slow for me – but not nearly so much as the first book and I recognise this is as much an issue of taste as anything else.

Once we do hit the 40% mark it really does pick up, we have action and intrigue and mystery – we have some twists, we have real development and we have some well laid seeds of meta-plot as well. It’s an interesting read with some very well done actions scenes and some excellently written conflict

There are some great conflicts in this book. Sydney is confronted with her deep held Alchemist beliefs against her friendships with the Moroi and the Dhampires. And it’s not just that the Alchemists reserve severe and terrifying penalties for those who dare to break their rules and fraternise with the Moroi – she has her own actual terror of them. She is unnerved getting too close or touching them and utterly afraid of expressions of their magic or actual blood drinking. Even giving a blood sample for medical purposes to them frightens her. Yet at the same time she has built bonds of affection and trust with them – they are her friends and she can’t imagine being without them even as her superiors seek to reward her by moving her away from them. This conflict is thrown into even harsher relief when we compare with the Vampire Hunters – their beliefs are not alien, they are just Alchemist beliefs taken to a more extreme (or not even that extreme) level. Her vehement rejection of their brutality is not just showing her humanity but also shows just how far she has deviated from the Alchemists own morals – and leads to uncomfortable questions about blinkered loyalty and who the monsters actually are.

This morality is pushed further as she is forced to accept her own magic and magical path even though she has fought tooth and nail on every step.  But to help her friends she is inevitably forced to embrace it with all the conflict that implies.

There was also an interesting conflict between responsibility and freedom. Sydney is extremely over taxed – largely because the Moroi she is looking out for keep getting themselves into trouble and need her help. We can see a stark pressure on Sydney to constantly be available even as her own social life – and, indeed, life in general – are constantly put on hold. Yet the conflict is examined without the rather melodramatic “I just want a normal life!” that we see so often. It’s interesting to look at Sydney’s agency – because she lives in a world that largely denies it. The alchemists have a strong sense of duty and extreme limits on what their members may or may not do and it’s something Sydney lives with. But the demands on her constantly push her against the many limits – in addition we see how she grows to break those limits, though initially to help others.  In short, we can really see Sydney grow as a character

The romance in this book also didn’t annoy me. That seems like mild praise at best but most romance in YA tends to annoy me – I hate the tropes of love at first sight, I hate the excessive angst, I hate the over the top love based on very little foundation – I dislike the melodrama of it all. This was blessedly free of it. First with Sydney’s delightfully awkward (and awful) relationship with Bryden, you could see from the first moment it just couldn’t possibly work, that they’d make good friends

Another thing I liked is that Sydney is a strong character without the usual trappings. With her intelligence, fierce capability, organisation and authoritativeness, Sydney is a very strong character even with the constant limits on her agency. She’s real, she’s surprisingly powerful and she’s very human – and she can’t fight. Too often “strong” character is misinterpreted as “character who has a lot of guns, knows 4 martial arts and throws fireballs.” You can have a strong character who isn’t violent or capable of violence. However, this is changing – and I fear that as she grows stronger and improves her agency so we will also see her improve her magical skills to become dangerous. While correlation doesn’t equal causation, the two improving together still has unfortunate implications

That being said, the magic open to humans is more intellectual and ritual based – so is more to do with intellect and skill than innate power.

Beyond Sydney, there are no characters that annoy me (probably because neither Rose nor Lissa have made an appearance yet. Maybe Rose hasn’t found the place yet, having not got actual directions and just being told “it’s in the US somewhere”) I would like to see more Moroi magic though. Still they’re all pretty real characters with real conflicts, motivations and goals

Inclusion-wise, these books are, sadly, completely devoid of minority characters

Cards on the table, I didn’t like this book. But that’s because I don’t particularly enjoy YA. I don’t like personal drama, I don’t like relationship drama and I don’t like school settings. Putting aside my own dislikes and personal taste, objectively this is an extremely good book – and if you do like these settings you will probably enjoy it immensely. The characters are interesting and 3 dimensional, the story is interwoven and contains suitable twists and is decently paced and Sydney is an intriguing and deep protagonist with many layers