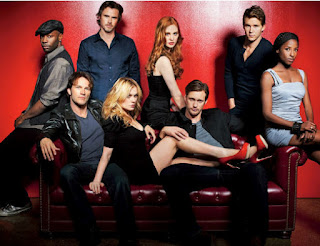 From the moment I saw the previews of season five, with Christopher Meloni, I couldn't wait for his first scene.  This episode we were introduced to Roman and learned a lot more about True Blood vampire lore.  It seems that not only are vampires the descendants of Lilith, they have their own vampire religion and bible. As much as I love Meloni, if the vampires are indeed descendants of Lilith, why couldn't we have a strong woman as the leader of the vampires?

During interrogation, both Bill and Eric were quite prepared to protect each other and claim fault to save the other.  This made absolutely no sense to me.  In my review of Turn!, Turn!, Turn!, I commented on their dedication because this makes no sense, given their history of antagonism and occasional moments of grudging respect; but it seems that they are continuing Bill and Eric's excellent adventure.  In the end, to save their lives, Bill reveals that not only is Russel Edginton not dead, he is on the loose.  Roman is upset by Eric's excuse of wanting Russel to suffer and threatens to stake Bill, but Bill promises to end Russel as a final act of solidarity.

This episode, we finally got to see how Eric and Pam met. I am not normally a purist, especially given that the original text was written by Charlaine Harris, however; having Pam as a madam in the early 1900's just did not work for me. It actually makes Pam a lot younger and therefore less powerful than she is in the books and it means that she didn't evolve into who she is, but was always jaded and hard. In the books, Pam left with Eric to avoid the restrictions placed on her as a woman.

Well, it seems that the predatory gay man is going to be the theme for this season's True Blood.  Each year the writers seem to pick some trope to beat us to death with.  This year the trope is embodied by the closeted and predatory Steve Newlin. After admitting that being a vampire gave him the strength to go after what he really wanted, Newlin went on television to sell the idea of vampires wanting peace and unity.  When asked if he had someone special in his life, Newlin made a point of using a female pronoun.

If that were not enough, Newlin decided to crash Jessica's party to buy Jason from her.  When he offered her ten thousand, she started to talk to him about how hard Jason's ass is, along with his other assets. Newlin became so aroused at the thought of a naked Jason that he began to breathe hard, his fangs dropped and he got an erection.  In turn, he was belittled and laughed at by Jessica. When a fight broke out between the two, instead of punching, he actually pulled Jessica's hair.  Is there any trope that they won't have him live out?  What he was suggesting was horrendous and predatory but the whole situation made his attraction to Jason appear deviant and dirty.


Unfortunately, we have to talk about Sookie.  Was I the only one who cheered when Tara instantly made her snack food?  Pam had to order her not to bite Lafayette and Sookie. When Sookie started looking for support in dealing with Tara, Pam made it clear that she was on her own and that she still expected a debt, before taking off.  Clearly Lafayette and Sookie were terrified of Tara.  Sookie even had to use silver to get her into the basement hideaway.

Of the two, only Lafayette felt any guilt for the decision that he made.  He was honest about Tara being all he had, whereas Sookie could only do her glass is half full routine. I am glad that Tara didn't actually forgive Sookie.  Too often their relationship has been so unbalanced, with Sookie's wants and desires being put first.  Lafayette is right, the decision to turn her was selfish.

In other irrelevant plot lines,  Terry Bellefleur is going through something dark.  He was aggressive to the point of throwing Arelene across the room and even yelled at her.  He kept having flash backs to his time at war.  I think in a show about hyper able beings that it is important to have someone disabled, but I fail to see how this plot line can possibly come together with everything else that is happening on the show.  It's enough to make me wonder if Alan Ball has ever heard of the miracle of the plot box. Minor characters don't need their own plot.

Jason keeps having his wild ways come back to haunt him.  It almost suggests that Newlin is his punishment for daring to be too sexually active.  One boy comes into the station and punches him for sleeping with his mother.  Jason takes this to heart and seeks out Hoyt to apologize and offer up his house, so that Hoyt doesn't have to live with his mother.  Once again Hoyt says no and tells Jason to leave.  For her part, Mrs Fortenberry promises to bake for Jason in thanks.  The relationship between Hoyt and Jason is yet another bit of storyline that we don't need to keep touching base with.

Jason doesn't really have to be too sad about losing Hoyt because he still has Andy.  Together they come across Debbie Pelt's minivan.  This is the last vehicle I would have expected this messed up werewolf to drive.  Debbie had some V in a side panel and Andy struggled, but eventually handed it over to Jason.

Sam's noble routine is rewarded by being allowed to leave with his life after Alcide refuses to eat the body of the former pack leader.  For all the drama, we all know that Alcide is going to become pack leader and so I wish they would get it over and done with already.  When Luna and Sam head back to her place, they end up in argument when her mother in law knocks on the door demanding to see her grandchild.  Luna gets her back up and says that her daughter is a shifter and not a werewolf. When Sam points out that she could be wrong, Luna does the either you're with me, or against me routine and gives Sam the heave ho.  Again, why should I care whether these two are getting along or not?

In the moments when the story is centered on the main characters, nothing beats True Blood.  The ridiculous attention on these side plots however, is nothing more than a meaningless distraction and empty filler.  Given that True Blood has such a short season, leaving the viewer always wanting more, the refusal to stay on task is so incredibly frustrating. As much as like Terry, I want to see less of him, not more.

What were your thoughts on this episode and its treatment of side characters?