Review: A Hundred Words for Hate, by Thomas E. Sniegoski, Book 4 of the Remy Chandler Series 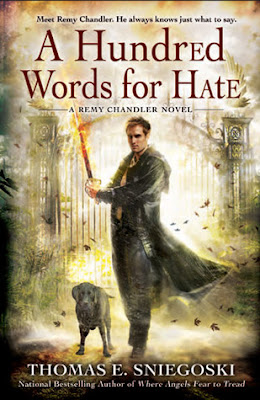 Adam, the first man, is breathing his last, even his extremely long life is coming to an end and he has one dying wish – to be buried in the garden of Eden, a wish that his descendants, the Sons of Adam, wish to make real, even if they have to consume the fruit of the Tree of Knowledge itself to bring Eden back to Earth

Unfortunately he’s not the only one who has designs on the garden. Before Eden was sealed, Lucifer sought to use the garden as a beachhead from which he could invade Heaven – prevented only by Remiel – Remy Chandler – sealing the garden. Worse, someone else is abusing the garden – possibly even killing Eden in the process, to use its divine power to their own dark ends.

Remy Chandler has a mission with the remaining Sons of Adam to try and find the Daughters of Eve who have the second key to opening the gates to Eden. But they do so under constant attack from the garden’s raging and insane Cherubim guardian – and all of their actions may be being directed by a far older, far greater puppet master.

In this time of conflict, a new dark force may be rising, the Shaitan, a creation that may be far worse than all the legions of Hell.

This story continues to bring the epic. The world in the balance, fate of humanity , good vs evil, the whole nine yards of epic storytelling with everything riding on the outcome. This is one thing this series has always done well – and this is no exception. The sheer amount resting on the actions of the characters was never lost or distracted from and always forefront in all of the action since then.

Part of this means not having any side plots – that can make stories linear but this managed to tell the story from several points of view with different aspects all moving together. So, by following Remy and his investigations, Francis in Hell and Mulvehill with Fernita it prevented the story being linear while making sure it didn’t deviate off the importance of the main plot line.

The action scenes were well written, exciting and truly got a sense of the forces involved, including the awesomeness that the angel’s represent and the power and fear that goes with them. This is difficult to carry so consistently and especially difficult to keep fresh with so many different action scenes throughout the books. It keeps being exciting, keeps being fresh, keeps being fun to read. The pacing was excellent, without the down times for angst or distractions that bothered me in previous books – everything was relevant to the story and the plot of all 3 storylines moved forward together, intertwined and naturally flowing from one to the other.

I really liked the insights into Francis and Fernita’s past, again, without derailing the main story or detracting from the epicness of it. It added a much more human element to Francis as we saw what he was pushed to do to seek redemptions. It’s nice to see him as more than a repentant angel who kicks arse.


Similarly, I liked seeing Remy’s human side divorced a little from his constant grief. His grief was never unrealistic considering that he had lost the love of his life – but because we never saw Remy outside of his grief, it made him a difficult character to begin to identify with. Still, him communicating with his dead wife was always very touching and added the human element, especially as Remy starts to merge his human and Seraphim natures together, more completely and finding that combined they are far stronger than they are separately – because the human has far more to fight for and far more to live for. I am glad to see Remy move on, in a way, because it ends his grieving, yet at the same time I feel like I want a more solid time line, because it feels like he’s leaped into moving on awfully quickly. The other element of Remy’s character that seemed odd is that he seemed to be living a normal life. I think part of the problem with this is because the books are so epic that Remy doing anything mundane seems disjointing. After all, last book saw Lucifer released from Tartarus – shouldn’t Remy be doing something about that? I had a little moment of “why are you sat drinking tea with the nice old lady?! Satan is on the loose, go, do something, seraphim him!”


I do like how this story retakes Bible stories – and the Sons of Adam and the Daughters of Eve are a fascinating one. I particularly like how wrong the injustice of blaming Eve is presented since the blaming of Eve is something that is used so often as a foundation for misogyny and sexism. I also loved the sentient Eden and her struggles against possession. This, coupled with the much greater detail of examining the angels and the different kinds of angels (including Cherubim and Thrones) makes for a very deep and involved world that has not just taken a couple of elements of the mythology, but has taken and developed it whole cloth with considerable amounts of work and research.

Inclusionwise we have a number of women who are strong and even dangerous on a level even the Angels have to respect – such as Izzy among the Daughters of Eve. Fernita is old but still strong and determined and stands up to the disturbing evil of the Shaitan to defend herself and Adam.

We do have a number of POC – I particularly like that the Daughters of Eve are Black (though the fact the Sons of Adam are not suggests it’s not a comment on the race of Adam and Eve) and the insights into their past through Francis and Fernita’s memories. The problem I found is that every time they are mentioned their race is also mentioned. If there’s, for example, a long conversation or action scene and rather than repeating their names we get description like “the man said this” “the woman replied,” “the seraphim ducked,” then with Fernita it’s always the Black woman. It stands out in sharp contrast to the way the White characters are referred to – it’s a mild form of Blackety Black Black. I did like the characters though, they were strong and capable, fun and not dogged by stereotype

We have one gay character – or one character who is heavily implied as gay because he loves another man. It’s never requited or even revealed before that other man is dead – nor, at any time, do Remy or anyone else repudiate the homophobia he has faced that force him. The fact he ends up stuck in Eden with a woman – them both having only each other for company would be more amusing if he hadn’t already spent 70 years unable to experience love or companionship. I would like to see he is capable, but he just kind of follows Remy around because he has some information stuck in his head, he doesn’t actually do anything.

In total, I think this series is looking up. While not perfect in inclusion it seems to be doing better than in the earlier books. The story is also tighter and more focused, with Remy’s personal life flowing around and through the plot rather than being a huge great stumbling block in the middle of it. Well paced, well researched, exciting and fun - I'm hooked on this series