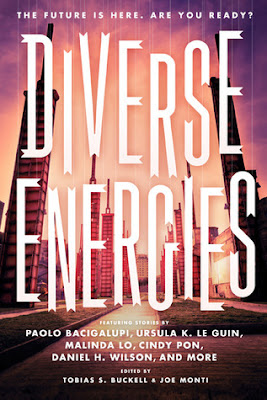 This is a book of several YA dystopian short stories that aims for diversity. Much of YA, of speculative fiction and definitely dystopia is extremely white washed and made up entirely of straight people. GBLT people are, largely, dead and POC and women frequently take a back seat to the noble straight, male lead. It’s refreshing to see an anthology of short stories that focus on minorities.

I’m going to sound all kinds of fluffy but I have to say I would have appreciated a happy ending or two. I know, it’s dystopia and all, but only a couple ended with what could be considered actual happy endings and I do so hate ending on a downer. Overall the book is gritty and dark and sad. But, at the same time, more realistic for it. These are not kids who manage to reach inside themselves and change the world, these aren’t kids who manage to heal all the wounds and these aren’t kids who change the system, lead the revolution and make the world a better place. They aren’t even kids who can escape from their conditions and live better lives – sometimes just surviving is an achievement in these worlds. Which is realistic but… well, grim. The Last Day by Ellen Oh, a story of World War 2 Japan, where Japan didn’t surrender after Nagasaki and Hiroshima – and more cities are wiped out is among the darkest you’ll ever read.

And there’s nothing wrong with a bit of grim here and there, but it does have a different light on the escapism. I do think one of the best stories in this light is Gods of the Dimming Night by Greg van Eekhout where the protagonist refuses to leave his family and become a hero fighting in Ragnarok, instead choosing to bring his family money for power and food.

My main complaint will always be that these are short stories. I’m not a lover of short stories – I feel that they really don’t have the chance to develop themselves. And I think that’s especially true of this book which has 11 stories crammed in there – that’s 11 with a foreward and afterward and it’s not a very long book. Some manage to elegant encompass the entire story in the short story format: Good Girl by Melinda Lo with a tragic love story in a dystopian world obsessed with racial purity. Pattern Recognition by Ken Liu, a story of a rich western corporation exploiting poor POC children to be used as computers. What Arms to Hold by Rajan Khanna is another beautifully tragic story of POC children being used as slaves in the mines, his escape rather than being used as a tool for the revolution. No, it doesn’t end with a resolve but, realistically, there is no good resolve that would come. It has a bittersweet closure of its own.

While these really did well in the short story format, others handled it poorly and, I think, felt more like prologues for something greater. Blue Skies by Cindy Pon sets up a wonderful story where the Haves rule over the Wants and a Want boy kidnapping a Have girl to gain money to try and change society – it has vast potential that is only hinted at in the short story. Freshee’s Frogurt by Daniel H. Wilson was definitely the weakest story in the collection – was mercifully short and barely even established a prologue for a greater dystopia. Why tell the story of the first shots of a war which we never see? Similarly Next Door by Rahul Kanakia, a great story of an extreme class divide and one boy and his boyfriend trying to find their own home, felt like setting up for more. Especially since it appeared in the same book as Blue Skies, it felt like the relationship was introduced as an after-thought since it was brushed on so shallowly.

While they aren’t prologues I also think Uncertainty Principle by K. Tempest Bradford spent a lot of time setting up an extremely complex world with a changing reality and time travel – and how this one girl can see how the time shifts and reality changes. It felt like it was a perfect set up of the world but after all that effort the story ends – it’s a difficult and mind bending concept to fit into a short story.  A Pocket Full of Dharma by Paolo Bacigalupi also introduced a complicated world I wanted to see more of – the story itself was relatively self-contained (and bittersweet tragic) but the setting was worth a revisit.

To me, the stories that truly stood out were: Solitude by Ursula LeGuin by telling a masterful tale of a dystopia from the point of view of the people who have grown up in it and just consider it home and life. Seem through the eyes of an anthropologist from a different planet watching a new society grown out of the ashes of a great empire and her daughter who grows up on the world and absorbs the culture and customs. It has some amazing themes of people vs person, of solitude and thought and of judging “barbaric” cultures we know so little about. It has layers upon layers and is a beautifully well crafted story. What Arms to Hold by Rajan Khanna was also up there as being stunningly beautiful and tragic story. Good Girl by Melindo Lo was also a passionate, meaningful story that made excellent use of the short story format and was an enjoyable read.

As to its brief, these stories certainly hit the mark. Except for Freshee’s Frogurt all of these stories had POC  protagonists and even in Freshee’s Frogurt, the person doing most of the action was a POC. Not only do they have POC protagonists but also include a large, diverse number of POC in side and back characters. The stories, when coming from identifiable real world places, are largely outside of a western context. And it’s more than just a label, more than just a passing reference with no culture or markers – it’s a full immersion and inclusion of actual characters.

Of the 11 stories, 2 of them had GBLT characters (Solitude referred to GBLT people in passing – but it was just in passing, the other stories are erased). Good Girl focuses considerably on the relationship beautifully and Next Door has it and has enough information (though contains homophobia which seems out of place) to make it more than a reference even though it’s a very distant focus.  which is… well, compared to the genre as it stands this book is head and shoulders above the rest for diversity. But that’s because GBLT people just don’t exist in dystopian fiction. So as a collection of dystopian short stories it’s amazing inclusion in terms of sexuality. In terms of a book that is expressly created to be diverse… the diversity is probably more a focus on racial diversity.

And beyond that there were some very good reason in this book – it was a fun read and only a couple of the stories didn’t amuse me. It is heavy on the grimdark though, so if you need a pick me up, put this book down and find something gentler.

A copy of this book was provided by the editor through Netgalley
Posted by Sparky at 9:00 AM