Review: Her Own Devices by Shelley Adina, Book 2 of the Magnificent Devices Trilogy 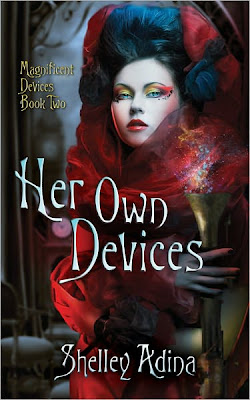 Lady Claire is back with her horde of children, defending her patch of London with lightening and bombs, if necessary. But far more fraught than keeping her squad of gamblers safe on the mean streets of London is negotiating the pitfalls of marriage.

Because her erstwhile employer and frequent foe, Lord Selwyn has proposed to her. And it seemed like such a good idea at the time that she found herself saying yes. Unfortunately, it’s never that simple – especially since she still holds on to the desperate ambition of attending university and becoming and engineer, something that becomes all the more ideal after the help she gives Andrew in his device for improving coal.

Despite her unorthodox successes in the lab, she is denied the kudos due to her because she is a woman – and it’s clear that both her mother and Lord Selwyn will see her dragged down the aisle sooner rather than later. And once married not only will her future as an engineer be lost – but so too will her connection with the children she has promised to protect.

Like the first book in this series, this book was just fun. Fluffy? Yes. A little silly? Certainly. Not hugely deep? Perhaps so. But it was immense fun. It was a book you could happily lay back with and read cover to cover with a big smile on your face. It was fun, it was funny, it was light, it was interesting, it was a thoroughly enjoyable read.

And the protagonist is excellent. Of course, part of that is for the social justice issues she fights and faces around class and sexism and her wilful battle against the forces that oppress her. But ultimately, she’s excellent because she’s fun as well. She’s one of those protagonists you can really get behind. From the very first page you’re rooting for her, you’re on her side and cheering for her to succeed. When someone angers or offends her, you’re angry and offended on her behalf. When she wins you celebrate her victory. She carries you into the story which is the number one priority of any protagonist.

The story itself is nicely put together. The pacing is great with no lags or down time and, similarly, no rushing, skipping or skimming. It was also intriguing and unpredictable, for so much of the book I didn’t know what Claire was going to do and why and didn’t predict her path or anything like the ending (which had some excellent twists to it). There was never a point when I wanted to put the book down and I resented any interruptions that pulled me away and, as I said, the story quickly got me emotionally invested.

Does it rely on amazingly fortuitous events falling into place just so? Yes, it does. It’s a feel good story of joy and success – it’s not gritty, it’s not meant to be. It’s fun – and if part of that fun requires a pretty major stroke of luck or some coincidences coming together, well, sit back and enjoy the damn fun already.

Despite the fluff and the fun, this book does a good job of addressing some important social justice issues, better than the last book (where Claire’s rise from poverty was a little too lucky and easy). Now established, we don’t see the miraculous rise from poverty, but as she moves more in her old circles – including with her mother and her fiancé – we do see the naked classism that was so prevalent. The fact the children she looks after are orphans earns no pity, the fact she feels invested in them or their future doesn’t matter. The fact these children will have nowhere else to go means nothing to her noble peers. They’re “alley mice” and not worthy of time and attention. Whenever Claire “forces” the children on her noble connections they are brushed aside as much as possible, to servants quarters if possible or out of their lives entirely if they can. Without breaking the fluff and fun of the book, it starkly addresses how these children are simply not seen as people – and contrasts that with a missing noble child that all society pities and worries over.

And on the servants we also see 2 servants in love but putting aside – and even burying – their love as hopeless since they both have positions. Love is a luxury consideration that is much more secondary to a secure position that will put food on the table.

Which brings us to a major issue covered in this book which is the sexism of the time. Claire’s repeated desire to study to become an engineer is mocked and never taken seriously despite her clear talent and mind. Her mother has an overwhelming obsession to marry Claire off and Claire even accepts a proposal for marriage simply because the cachet of being the first in her circle to marry is so high that it would be unthinkable for her, with so few prospects, to turn it down. Claire is never taken seriously and is outright denied her rightful recognition as an inventor and as an engineer simply because she is a woman. In the end this cumulates into Claire almost being forced down the aisle whether she wants to go or not.

In terms of minority inclusion, one of the children under her control, Trigg, is POC  - he also seems to be taking the most pro-active and involved role and following her down her path as an engineer. There are still no GBLT characters.

So far, both the books in this trilogy have been more than worth buying. They’re great fun, extremely feel-good reads that make you share all of the protagonists journeys and victories. They’re an excellent steampunk series and I can’t wait for book 3.

(Side note - while the cover is gorgeous I do have to ask - who on Earth is this woman supposed to be?)