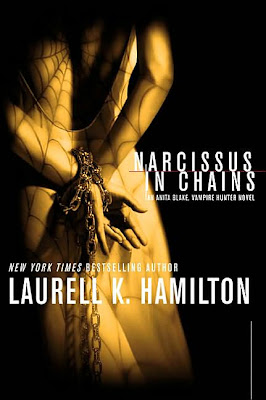 I normally begin my reviews with a summary of the book’s plot. So I’m going to scrape some plot out here to write about

Anita has, after the drastic events of the last book, decided to end her 6 month separation with Richard and Jean-Claude and re-bound the marks since without the marks being properly linked all three of them are walking around with a great big target painted on their foreheads. Unfortunately, because Jean-Claude is an incubus, uniting the marks means Anita gains the adeur, becomes a succubus and gains the mystical ability of having to have sex every 5 minutes.

There’s also a new force in town kidnapping shapeshifters and making a play for Anita’s leopards, a new Nimir-Raj in town interviewing to lead the leopards  and  a battle that results in Anita being clawed by a wereleopard. She now has to not only rescue her leopards and keep her people safe – but deal with both the demands of the ardeur and the urges of her beast.

I’m going to say something that will shock a lot of people who have read this book. This book had potential.

No, really, it did. We had Anita and Richard finally realising they need to work something out with Jean-Claude and stop doing the whole running for the hills thing (or the turn into acid thing). With the addition of the new leopards we could have actually developed Anita’s connection with the leopards and actually give the Pard a culture on par with the wolves (there’s a reason why Anita keeps using the wolf words for the leopards – because they don’t have words! They even shifted from a French Heraldic naming system to a Hindi naming system). We could have had an exploration of the political implications of an alliance between the vampires and the werewolves – and even working the hyenas into the system and where that left the rats. Especially with them developing a “Shapeshifter coalition”. Part of that could be pointing out that Chimera isn’t actually much of a threat and it’s only because the big hitters abandon the weak  groups. They could have developed the sheer mess Richard had made of the pack – perhaps even working with Raina’s munin rather than making it another one of Anita’s arsenal of one-off-powers we forget about until they’re needed. We could have had a greater examination of what marrying the marks meant beyond just the ardeur and even some more definition as to what powers Jean-Claude and Richard actually have. We could even have had Anita remembering she’s a Necromancer or, y’know, has a job.

Because there was actually a lot more to this book than the ardeur and the endless humping, though it is the first step down the road that leads to all the books being consumed by humping. But none of it was developed – there was just a lot of random, seemingly pointless, events that didn’t develop into anything, added nothing to the characters and nothing to the plot. Damian and Gretchen being released from the coffins – not developed. Gil, the werefox, what was the point? Faust and Meng Die introduced – why? The Swan-King and the Swanmanes – added nothing. Even the core of the shapeshifter coalition could just have had Christine (a pre-existing character) turn up and say “shifters going missing” and covered everything that was needed there. Ronnie and Anita going out dancing? Pointless. Paris strutting her stuff at the Lupanar? Pointless. Richard’s angst about some werewolf killing someone on her wedding night? Pointless! Even that whole leadership challenge was covered in the damn epilogue! Chekhov’s gun,folks! Or Chekhov’s damned arsenal in this case!

Wait, I’ve got to have a tangent here – by all that is holy stop resolving issues in the epilogue! An epilogue exists to tie up minor loose ends! The epilogue exists to bring some confirmation on side issues. The epilogue does not exist for you to brush over huge great big sections of the plot and world! Why set up Anita as Bolverk and have an angst ridden scene where Richard concedes that he can’t be evil enough to be Ulfric and needs Anita’s help if all of Anita’s help and all of that conflict is solved in the epilogue?!

These random pointless events not only cluttered the story but also made the pointful events that were foreshadowing for future books – like Dolph’s family issues and Asher’s bitterness seem just like extra clog and filler. Even parts of the plot like rescuing and healing Gregory just dragged on for chapter after chapter with no good purpose. It’d fit if there weren’t so many distractions – but there always are.

Added to this, Anita was so reactionary in this book that the plot seemed to sneak up on her. Really, if the bad guys hadn’t attacked her home and hadn’t tried to lure them into a trap she would have left them alone. It’s not just that they had to find her, but, between the random events and all the humping, she didn’t even seem overly curious about the guys who wanted to kidnap and torture her leopards and nearly killed her.  It felt like the bad guy had to repeatedly wave at her until she finally took an interest – in fact, if it weren’t for yet another kidnapping, Chimera would probably still be there in St. Louis at book 20, twiddling his thumbs, launching the odd attack, and waiting for Anita to finally deign to notice him. The plot, such as it was, seemed to be a distraction to the main issue – which was getting Anita into lots of pointless sex and lots of pointless angst and lots of general pointlessness.

Which is why I think, contrary to what many critics say, this book doesn’t show the author has run out of ideas. She clearly has a LOT of ideas. But for some reason those ideas have been shelved in the back somewhere and instead we’re left with humping.

Which means, yes, I’m getting to the ardeur. The bane of this series. Anita has has has to have sex or she will go mad, die, randomly seduce strangers. Firstly, the very concept of this is distressingly close to rape which is completely unexamined as I’ve mentioned before. But to compound that, her new mystical powers/possible were-leopardness/randomness apparently lead Micah to have sex with her – no, that’s wrong, lead Micah to rape her. He has her against the wall in the shower and she says no – which he ignores. From there a relationship of mutual respect truth and eventually love is built without ever ever mentioning the rape again. It’s beyond problematic.

After that, Anita has to have sex. She has sex with Jean-Claude, Asher, Nathaniel, Richard, Jason, Micah. She has sex then is sad about it. She has sex repeatedly because she has to and, in the end, the ardeur even raises its ugly head with the enemy as well – adding confident seduction to her killing tactics before she finally gets round to pulling a super power out of the ether to finish him off. The sex doesn’t forward the plot at all and adds a major derail to match all the other derails in the book. The fact that sex is now a life and death issue with Anita means that sex has to take precedent. Any other issues fall to the background – sex must happen. Even her new potential wereleopardness is subsumed into the need to have sex. In fact, every super power seems to involve sex – even Micah’s ability to heal involves licking erogenous zones! Hospitals in the Anita Blake verse has no disinfectants or antibiotics just lots and lots of condoms since all healing magic involves sex.

Next on the checklist of awfulness I simply have to mention (alas there’s so much) is the werehyenas. I’ve mentioned these before when commenting on GBLT characters in the series. These are a hot mess. Narcissus is an intersex werehyena who dresses in female clothing and uses male pronouns. All the werehyenas are male because he fears that if he gets a “real woman” he will lose control of the matriarchal hyenas. The hyenas themselves are all gay men, muscular and into BDSM (one handed typing strikes again) and there’s 300 of them – they are easily vanquished by a force that they vastly outnumber (because they’re not “real muscle”), don’t fight back and end up being horrifically tortured and raped in an incredibly graphic, extreme fashion. Until being rescued by straight Anita, straight Richard and the much more manly werewolves.

Chimera is a self-loathing bisexual who rapes men and women both – but only rapes men if they’re also gay or bi (thereby making sure the straight men are not demeaned and violated).

It’s one of the most grossly homophobic moments of the series.

As to writing style – I actually like Laurel K Hamilton’s style. Yes, it’s extremely overwrought and melodramatic but it really works for setting scene and tone and pace and plot – it’s vivid, it’s hyper-realistic and it sets the theme. But only when the theme, scene, tone, pace and plot are right. When they are, it’s an excellent, fully immersive scene of epic combat or a nail biting evocative moment of life and death or even a heart rending conflict of bleak moral choices. When it’s done wrong we get a gazillion paragraph description of how blue someone’s eyes are.  Since Narcissus in Chains doesn’t have the strong backbone to fall back on, the writing style just exacerbates what’s wrong with it.

This book leaves me feeling vaguely guilty about the books I’ve DNFed since I know I’ve finished this one and all the books that follow it. In fairness, I suppose the book COULD COULD stretch to a 1 Fang, but the 1 Fang rating isn’t just for the awful book – but also for that horrible crashing and burning of an awesome series.  I probably would have given it a 1 fang – but the unexamined rape and the blatantly revolting homophobia are just beyond anything I can grit my teeth and tolerate.