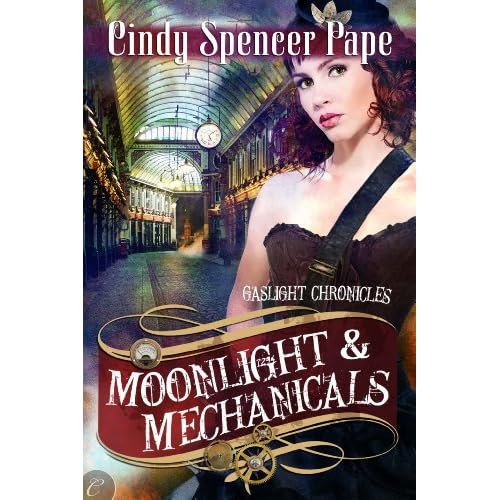 In this fourth book in the series, we return to the Hadrian clan, whom we first met in Steam & Sorcery. The Hadrian brood is all grown up and now the children are finishing their education, or engaged in work for the order.  In Moonlight & Mechanicals, the protagonist is Winifred Hadrian (Wink), the engineer of the group. From the moment she was saved by Constable Liam McCullough, Wink fell hopelessly in love with the werewolf.  Though Liam McCullough holds Wink in high regard, his troubled past has led him to believe that he is simply not husband material.  Liam is determined to play Cyrano de Bergerac to Wink's suitor Connor.  Liam's firm belief is that if he can get Wink safely married off to a man he knows will not mistreat her, that she will be safe from him always.  Like all good plans of mice and men, things don't work out the way that Liam plans.  People and animals are going missing in Wapping, the area where Wink ran the streets as young street urchin and in order to solve the mystery, Liam must work closely with the entire Hadrian brood, thus drawing him closer to Wink than Liam feels comfortable. Against a backdrop of intrigue and even threats the Queen Victoria herself, Liam must deal with the ghosts of his past, as Wink presses him to believe in the pure goodness of his nature.

As a protagonist, I quite liked Wink. She is not the fainting type and actually prefers to have good solid clothing which she can move freely in and work in.  Having been given the freedom to pursue her interests, Wink works for The Order as an engineer and is fully capable of supporting herself. Wink has no patience with being treated as though she is delicate and therefore rightfully bristles when she left out of part of the investigation, and when Liam suggests she should retire from danger. When Liam is resistant to a relationship, she initiates sex, with no shame or discomfort. Wink has a strong personality, with a mind of her own.

Though Moonlight & Mechanicals is most certainly a steampunk romance,  the romance did not overwhelm the plot. Pape did a great job of creating an interesting mystery to build the relationship between Liam and Wink around. The mystery never felt ancillary to the romance and this equal weight kept the plot intriguing, even though as a reader I knew that Moonlight & Mechanicals, would end with a declaration of love, as romance novels typically do.

We once again had the inclusion of Aunt Dorothy, who is a lesbian.  We are told that she has been in a loving committed relationship for years with Miss Julian but that it is simply not acknowledged in polite society.  I would have been happier to actually see Miss Julian in this novel, rather than simply a reminder that Aunt Dorothy is a lesbian.

"Look at Aunt Dorothy. She and Miss Julian have been an item for decades and no one says a word."

"Partly because their relationship is not just socially ruinous, but also flatly illegal." Liam had no problem with Dorothy's lifestyle, but it wasn't without risks.  "While it may be stupid for the law to prohibit two women from being in love, saying anything in public could result in their arrests. (page 140)

Having a character defend the idea that two people of the same sex should have the right to be together without the interference of the law is most certainly a good thing, the fact that it was referred to as a "lifestyle" is problematic.  Gay people do not have a lifestyle, they have a life.  Having a character use homophobic language to fight homophobia is not progressive. Perhaps most importantly, at no time British history has it ever been illegal for women to be lesbians.

In terms of race representation, we once again had Nell Hadrian.  Nell can see and communicate with ghosts, a talent which she uses to help heal some of Liam's wounds.  The problem is that each and every time Nell is mentioned, we are reminded that she is the square peg, which does not fit into the round hole. Pape constantly refers to Nell's exotic looks and it's absolutely problematic.  This is however further compounded when Jamie and Liam watch the sisters descend the stairs dressed for a ball.


With all that amber and gold on, her eyes took on the same shade, glowing with warmth.  She was so striking it nearly hurt to look at her, but he forced himself to offer each of the sisters a precisely equal bow. (page 206)

Granted, Liam is in love with Wink and not Nell, but this passage set Nell up to be lesser in comparison to her White sister, thus elevating a White woman, once again to the epitome of  beauty and worth. The fact that Liam had to force himself to treat both women equally speaks volumes. This was further made problematic because Nell functioned as her sisters adviser, relegating her to the role of lowly sidekick.  The magical wise person of colour is a trope which has a long history in speculative fiction, and one that certainly needs to end.  This is pure speculation but from the hints that Pape left, I highly suspect that a pairing of Nell with her adoptive brother Tom is in the works.  It is my hope that should this novel occur that we will not be reminded repeatedly that Nell is exotic.

There are some significant social just issues with Moonlight & Mechanicals; however, I was still drawn in by the story.  The problematic elements in this story did not add to plot and I don't understand why Pape felt that their inclusion were necessary to the story.  The elements of the story itself are very strong and the mechanical creatures that Pape envisioned are full of imagination, leaving one with a sense of wonder.  Moonlight & Mechanicals, in spite of its issues is entertaining.

Editors Note: A copy of this book was provided by Netgalley
Posted by Renee at 3:00 PM