Review: Pilgrim of the Sky by Natania Barron 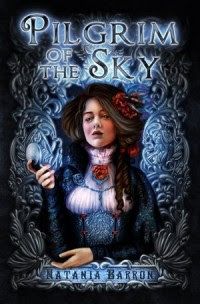 Maddie is trying to move on in her life after the disappearance and presumed death of her long term lover, Alvin. But Alvin’s brother, Randy is less willing to let her go and through Alvin’s contacts shows her the truth of where he has gone.

But there is far more than that to consider. Alvin has a plot far darker than she can imagine and she battles for control over Mathilda’s body as it becomes clear that Mathilda’s own motivations and actions are highly questionable to say the least.

As the plots focus on their ancient twains in the first world, it’s clear both that Alvin’s plans need to be stopped (and certainly surpass any romance she may be clinging too) but there is a plot above and beyond anything they expected.

I think this book needs a prize for sheer originality, I don’t think I’ve come across a world setting even remotely like it. The multiple worlds, each with their own twains, their own experiences, their own power levels but all representation the same archetype – albeit different facets of it is an amazingly excellent concept.  I loved how the Archetypes were done, drawing on the different aspects of similar deities or concepts that you see in different societies, drawing out their commonalities but also the different facets. So two twains could have similar powers, similar origins, the same Archetype but still be dramatically different and still fit within that archetype.

And the worlds – whether it’s our own modern world, the primordial first world, the steampunk second world – the fact there are eight worlds gives so much diversity not just to this story, but so much potential for any other stories within this world (or worlds).

The plot was also extremely well done – drawing on the richness of these worlds and pacing it well. There was such a lot of information here, but the author resisted the urge to dump it all on one massive lump. It’s doled out slowly and carefully, enough to keep us interested (and, I have to say, frustrated at times because I felt there were points when hints were given but Maddie completely failed to follow up on them – and I can’t understand why she didn’t, why she didn’t push more questions or demand more answers) without having to deal with an endless series of lectures. There were lectures, characters informing Maddie of what just happened and why, but it was done in bits, when appropriate (or less) and in manageable bite sized chunks. This vast world with its complexity was nicely conveyed. It was perfectly paced to keep you teased along, questioning but never overwhelmed.

The only real flaw I can see in the writing is I suspect the author has a degree in the History of Art or a related subject because we have constant artistic references cluttering the text. I suppose they help characterise Maddie a bit more, giving her some background, but at times especially in the beginning it felt a trifle… not exactly contrived but more like the author is trying to showcase their knowledge. I’ve seen something similar when can tell when an author has a Classical Literature background and they can’t resist including quotes and obscure literary references. There’s giving your character background and trying to wow the reader with your qualifications.

In terms of inclusion, several of the twains were POC. Though Maddie is white, it doesn’t follow that all her twains will be (and in the first world, her oldest and most powerful twain is Black). There are several POC because of that in the story – (and with interesting twists in the world like in the second world the European settlers in the US never managed to get beyond the East Coast). Unfortunately, while these twains are powerful and not uncommon, they’re also not the ones we focus on.

There’s also Randy who is a disabled character – but, again, we spend more time with Randall, his twain without any developmental difficulties. Yet Randy has some major twists in his story and as a love interest – but it doesn’t end well for him. Similarly we have a Blind woman in the second world who is powerful and capable, but the way her disability is described is less than ideal (doll like for one).

We have a number of strong and diverse female characters, though most of the immediate people around Maddie who aren’t villains are men. It also has some interesting twists brought about from the different worlds –like a Christianity focused far more on Mary’s intervention and a consequent matriarchal church and differing beauty standards in the different worlds. There is a skeevy moment where Maddie, stuck in Mathilda’s body, has sex with someone she doesn’t want to – and it is called out as a highly distressing incident. But that’s kind of how it’s framed – a highly distressing incident (in suitably downplayed Victorian tones) rather than the extremity it deserves – but it is acknowledged.

The protagonist is bisexual and so is Mathilda one of the chief antagonist. And their bisexuality is excellently integrated into their characters – I want to really like this character and I do – especially the inclusion.

But there are problems. First of all, Maddie has one past female love – who committed suicide. Mathilda is evil and uses sex and seduction as a weapon. And when all the chips fall, Mathilda is out of the equation. Dead, suicidal GBLT person and depraved, villainous bisexual. Maddie is aimed very much at a male love interest. Of course, we can and should have bisexual characters with an opposite sex partner but this is a trope – for GBLT inclusions we see a lot of bisexual characters who only ever have opposite sex partners (or same-sex partners were in some nebulous time in the past).

All in all this book has so many excellent unique elements that it’s almost incomparable to anything else. It’s in a league of its own, truly excellent in so many ways and one of the few books I’ve read that I can point to and say that it is utterly and completely original. This book would grace any bookshelf.

This book was provided by the publisher through Netgalley
Posted by Sparky at 3:00 PM