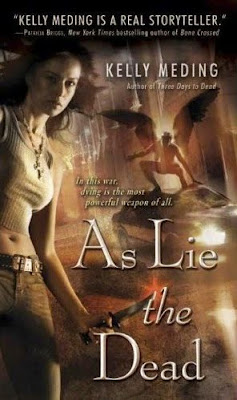 As Lie the Dead, begins exactly where Three Days to Dead ended.  After surviving a vicious battle, All Evy wants to die is sleep for a week.  Evy wants time to deal with her feelings for Wyatt but more important to deal with being in Chalice's ( this has got to be the worst name ever)
body permanently and the loss of Alex. Unfortunately for Evy, the rest she so desires and deserves is simply not in the cards for her.  When she is approached by Phin, an owlkin theorian who asks for her protection for the next few days.  Believing that she is at least partly responsible for the near extinction of the owlkins Evy agrees only to discover that Phin and the counsel want the death of the handler Rufus.  Evy is now caught between the debt she feels that owes both men.

If that were not enough, someone in the triads has decided to turn their back on humanity and gather therians for an assault.  The Triads numbers are low and they are desperate to stop the assault before it happens.  Evy must get to the truth behind the origins of the Triad to discover the sickness which has caused one of their own to turn against humanity.

As Lie the Dead was packed with action from the very beginning. I must admit that this is something that doesn't particularly agree with me.  I prefer character development and in this story, it really felt squished in between fights. I really liked that Evy continued to struggle with her new body and her rough childhood rather than having these issues being cast aside to deal with the problems at hand.  As a character however, Evy seemed barely able to maintain control of herself.  Sarcasm dripped from her tongue and her constant desire in a moment of conflict was to punch someone.  She didn't always act on this impulse but the repetition of the impulse did become irritating the more it appeared.  Evy also rushed headlong into situation without thinking and deeply resented anything that kept her away from the action.  I am hoping that as this series goes on, Evy will mature out of this.  It is possible to be a person of action and think though you wouldn't believe that from reading a lot of urban fantasy.


We did have kitsune which are Japanese wereshifters but if you didn't know that, you would never have thought of them as characters of colour from Medings descriptions. It is almost as though she actively stove to make As Lie the Dead as White as possible, even as she borrowed from other culture. It was clear that Meding attempted to make the therians and oppressed class with a juxtaposition to racism.  Phin spent much time informing Evy about her cultural ignorance and even heavily suggests that Dreg, the term used to describe all supernatural creature constituted a racial slur.  In Medings world, instead of having racial discord, we got a united humanity against the supernaturals who doubled as an oppressed class.  It makes absolutely no sense to have this juxtaposition while heavily erasing people of colour from the text.

The most interesting character in this story is Phin and in fact, is far more likeable than Evy.  I would greatly enjoy a spin-off story of just this character.  I thought it was interesting that therians were explained throughout human history by things like fairytales and myths.  Owlkins for example, explained angel sitings.  I wish that Meding had expanded on this idea as it would have added a greater dimension to the story.  We know virtually nothing about the Dregs beyond the fact that some are a threat to humanity.

As a follow up to Three Days to Dead, As Lie the Dead isn't bad but it certainly isn't gripping. For me, it always felt on the cusp of being a really good book. As aforementioned, the idea of substituting supernatural beings for people of colour is offensive, though it is unfortunately far to common in this genre.  The love stories that were central to the story were straight and there were no GLBT characters whatsoever. Having an ass kicking protagonist, with a tortured past and afraid to show emotion has become paint by numbers writing in this genre.  Though everything came together came together, the final product is reminiscent of so many other novels in this genre.  As Lie the Dead could have been original ten years ago, but now it just reeks of been there, done that.