Review: Kindling the Moon by Jenn Bennett, Book 1 of the Arcadia Bell Series 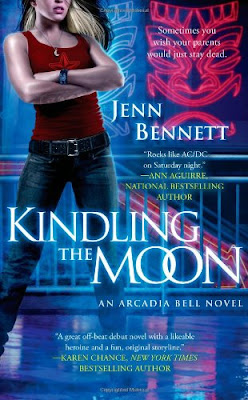 Arcadia Bell has lived under her false identity since she was a child, ever since she had to fake her own death with her parents after they were accused of a series of brutal murders of the heads of rival magical orders. She now tends a bar she part owns and has put her past – and her supposed status as the precious “Moon Child” behind her.

Until her parents resurfaced again.

Seeing them alive, those magical orders are demanding her parents be handed over for justice. Or, failing that, that she be handed over in their stead. And her Order isn’t willing to go to war over it, they will hand her parents over.

Which leaves Arcadia with very little time in which to exonerate her parents, preferably by finding the demon that did the murders and discovering who summoned it.

We have some interesting premises in this book that focuses on magic, magic users and demons more than other supernatural beings. And demons are vast, incredibly varied and not (necessarily) evil. The sheer variety of the demons itself lends itself to be a very open ended world with a lot of possibilities. The magic system is also one with apparent rules and planning – it may be my geeky love but I always prefer when you can see the how of magic in a world rather than just pointing and having stuff happen. The world and the premise of this series definitely draws me in – I think that alone would make me a follower and certainly makes me look forward to the next book.

There are some intriguing characters, Arcadia, Lon and Jupe all bounce off each other really well, they have an excellent dynamic. They’re fun, they’re real and there was never a moment when I didn’t enjoy reading them.

The romance between Lon and Arcadia also worked for me – they had a decent foundation and work well together which is something of a miracle because it was full of tropes that annoyed me. They went from just meeting to Lon being willing make large investments and risks on Arcadia’s behalf. The relationship started with Arcadia hating Lon (for little reason), we had a classic pointless misunderstanding (and since Lon is an empath that just seems even more unnecessary. In fact, as an empathy and a telepath can we skip the whole “does s/he like me?!” angst altogether), an unnecessary jealousy moment and a big dramatic break up which may have been reasonable and have some grounding if it didn’t end after less than a day. Despite only knowing each other for, maybe, a week, this relationship has lots of mini-dramas shoe-horned into it. All of them storms in a teacup. Is there a checklist? Do all of these need to be included in a romance? Romance tropes aren’t pokeman, your lovers don’t have to catch them all.

The pacing of the book works really well in terms of interest – there was never a point when I was bored or felt that a scene dragged on and there was some really fun and powerful action scenes that were really well handled. The story keeps moving forwards and I never felt the need to yell “get on with it”. But at the same time Arcadia needed to be more urgent for me. She has a deadline, after which she or her parents are dead – sounds like a reason to go all in. But she doesn’t even take time off work straight away, then she dumps the quest into Lon’s lap and… what? She’ll cast a spell that will take at least a day to return then kind of twiddle her thumbs. The book was never boring, but Arcadia was never in a hurry either.

Still, the story showcased the world and was interesting in its own right – I did enjoy it. And the ending? That was a twist I didn’t see coming, not at all.

And I don’t think Arcadia does. Don’t get me wrong, I don’t dislike her. She’s amusing, she’s a decent character, she’s not flawless and the mistakes she makes are (generally) reasonable ones. But there's nothing special about her and she's horrendously passive and reactive. Reactive isn't always a bad thing, but considering she has an investigation on a deadline I expected her to be more pro-active – her plot to actually solve the murders her parents are accused of seems to consist of speaking to Lon and then following up any leads he gives her. And then Lon largely takes the lead, taking her to places where the leads are, being the spokesperson in those places, leading the escape from those places, buying the artifact they need. At times I felt she handed her quest over to him and became a side-kick in her own story. And why is Lon doing all this for her anyway? There are also moments of passivity that annoy me. When she and Lon have their spat she just seems to stop - stop everything and sink into depression until he returns to take the lead again (thankfully soon). And in the big confrontation with the surprise bad guys at the end she just lays there in despair for an awfully long time, waiting for rescue. I can see why – but it also forms part of a pattern of her lying around passively while other people do things.

Arcadia didn't particularly annoy me as a character – but her special woo-woo is the only reason why she is the protagonist and I would have liked her to take a lead more in her own story. In this book she was almost Lon's sidekick. I’m hoping she grows into it as the series progresses. In terms of other women I’m not fond of how Riley’s “evil” was reinforced by her sexy clothes – it’s an old trope and not a fun one.

In terms of racial inclusion we have Kar Yee, Arcadia’s room-mate from college and current business partner. She’s aggressive, rather emotionless (even, I dare say, “inscrutable”) and feels more like a Dragon Lady stereotype than a character – she needs more development. She also came into America with a fake marriage.

We do have Jupe who is an awesome character, Lon’s son and mixed-race. Of course, the reason why he’s with Lon full time is his Black mother was, by all accounts, violent, unpredictable and maybe dangerous.  Jupe himself is interesting and has many layers and there’s a nice moment when he talks about feeling ostracised because of his race in a school with few people like him and when Arcadia questions that he excellently challenges how she can understand or question when, as a White person, she hasn’t had the experience.

There are a couple of unnamed rowdy lesbians in Arcadia’s bar for a very brief scene (they’re mentioned twice) and some members of the perverse (through Arcadia’s eyes) and dangerous Hellfire club may have been bisexual – it’s semi-implied. That’s it as far as GBLT inclusion goes.

In all, I enjoyed this book. It has a lot of unique concepts, a fun story, an interesting main character and a solid, intriguing world. I think it’s a good first book for the series and I’m certainly hooked in for the long haul.