Review: Soul Sisters by Janiera Eldridge - and sneak peak of the second book in the series! 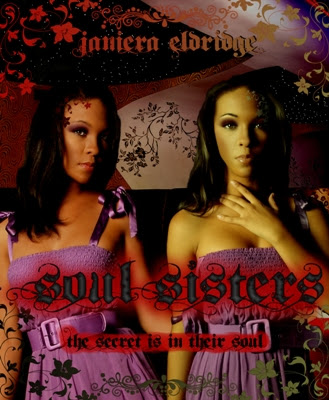 Dana is human who has built a normal human life. As much as you can when she was born in 1912. After making a deal with an ancient vampire shortly after her marriage, she gave part of her soul to create a vampire – her soul sister, Ani. After a long journey over the years, the two now live together, best friends and greatest confidants, the siblings are enjoying their eternal lives in their own ways.

Except Ani’s reckless behaviour draws more attention from the powers that be. Until her passionate defence of Dana against an attacker leads to more public deaths the vampire leader refuses to ignore. He demands their deaths and can find them anywhere

This launches a battle to find allies, to find a place to hide which, inevitably, leads to its own revolution as the siblings are forced to take the battle to the enemy.

This book has an extremely unique twist on the traditional vampire tale. In this world vampires are created by taking part of the soul of a human and creating a vampire “twin”. They look very alike and they depend on each other to survive. If one dies the other dies – resulting in a vampire and an immortal human. While it’s clear that not every vampire/human twin has a close bond, Ani and Dana definitely do.

The book also focuses on Dana, the human of the pair, and her journey into this life. Her life as a human in 1912, her life with her family and then her husband – followed by how she first made the decision to give up her soul and create Ani, and how her life developed with her new sister. Her past is rich and really well built with a full sense of what set her on the path. So much so that I think I would have liked to see more of Dana’s past in between the present and the loss of her husband, just to see the character develop more.

It’s also pretty rare to see a book that focuses so much on a sibling relationship. That mutual affection, care and worry for each other still spaced with that very common frustration at the others actions. It’s a very natural relationship for the most part and underpins the book.

For a long time though, the book does seem to be spinning it’s wheels. We’re introduced to these characters but they don’t seem to be overly involved in anything except developing them. Even when the path is set, they then spend a lot of detailed time training all interspaced with odd little conflicts as one of the characters gets angry over something – which then disappears or fades away. The end of the book does pick up very well though, racing with plot and intensity towards the conclusion.

Unfortunately, while the book had wonderful things going for it, it was then badly let down by the writing. Firstly, it needed an editor. I understand this is a later edition and considerably improved on previous versions but there are still grammar and word issues that need correcting.

Beyond that, the book just didn’t flow for me, I found the language and, especially, the dialogue extremely stilted and unnatural, often bogged down with unnecessary explanation and exposition, too much telling rather than showing and an almost repetitive need to drive every point home. I think the best way to show this is with a quote:


“Her friend Tasha said loudly. She said it so loud it left her ears tingling. Dana knew it was her friend Tasha because of the extra drama she poured into saying the simple words.”


After this we get a long explanation of who Tasha is (a friend – which we already know) and this character never really comes up again. This kind of writing continues throughout the entire book, stilted, long winded and often unnecessary.

The setting also jarred me from the story at times. While I loved the story of Dana’s past in 1912, her travels and how it set her path on the road she’s on, where she come from and how she lived, the setting got weaker the further we went in the book. When the team arrived in London it completely fell apart. They stay in an uptown apartment in London with a forest out their back door. One of two forests they hunt in containing wolves and bears. It wouldn’t have taken more than a google search to discover the unlikeliness of these wolf and bear haunted inner-London forests nor to discover that there was no way the protagonist could buy a can of coke for “50 cents” from a pizzeria in the city. Really, it would have been better to treat London the way they did Madrid – generic with no real description at all. The characters that were not American all felt American, there was no sense of Spain or England or Ancient Rome about them at all.

I have to say I found the ending anti-climactic, especially after the story was picking up towards the end of the book, all that crescendo fell rather flat. I also just can’t get behind these characters hailing Ani as a ruler. Maybe if we’d seen more of why Donovan is such a bad leader, or more depth from Ani, but we didn’t. All we know about Ani is that she has poor impulse control, casually and remorselessly kills people and has spent most of her 100 year existence partying. One of the things Donovan chided Dana and Ani for was for not realising the potential of their long lifespans. I just don’t see why Ani would be considered a desirable leader.

On inclusion, there are no GBLTQ people in this book, it’s completely erased. But it does have some excellent racial inclusion. The protagonist and many of the side characters are POC and that includes during the flashbacks to 1912 – and none of them are in stereotyped roles. They show a range and diversity of characters and settings which is especially unique when showing historical scenes since POC generally have even more restricted roles in novels looking into the past.

Dana and Ani bounce off each other well for the most part. They have a strong relationship that feels like family – though at times I think tension and conflict is introduced between them for the sake of it and it can feel forced. Dana also has very real bonds with her family and husband in the past. These are strong people with a strong sense of history and place that contains their culture and background without devolving into stereotype or trope.

I liked that Ani was fully in charge of her own sexuality and I liked that Dana refused Donovan’s interference into their lives for the most part. Both felt like great, powerful statements – but both were compromised I feel. Ani was happy to sleep with whoever she chose, but Rebecca’s beauty and flirtatious ways were condemned and I don’t know if Ani’s partying was supposed to be considered part of her growing recklessness. Dana rejects Donovan’s control – but takes his money and holds a rather unreasonable seeming grudge against him. Does she reject his control for the sake of independence or because she doesn’t like him? In both cases there could be a strong message here, but it depends on the angle you look from.

In the end, I’m left feeling disappointed in this book. Because it had vast potential that I didn’t think it reached. It had an interesting and unique context that really set it apart from so many of the other vampire books out there. That major difference in the creation of vampires sets up a whole new dynamic, a dependence and closeness with humans that goes beyond the usual romance trope which is fascinating to see. We also have a focus on sibling relationships which I have never seen in the genre, not truly to this degree, and a whole different family dynamic. Again, it’s a book about relationships and love that doesn’t shortcut to romance.

Extremely different and well worth developing. But I feel it was let down by the writing style I just couldn’t get into, some dodgy world settings that jerked me out of the story and moments in the plot that were just bogged down and more where I couldn’t agree with the character’s logic. I hope this improves in later books in a series because it has the seeds of something great here.

Soul Sisters is an urban fantasy novel about African-American twin sisters Ani and Dana who have a rather unique secret: one sister is human while the other is a vampire. While the sisters have lived peacefully with each other for many years one fateful night will change both their lives forever. When a drunken man tries to attack Dana (the human sister) Ani (the vampire sister) protects her sister with all of her ferocious power.

However, when the vampire's leader Donovan finds out about the public display he calls for the sisters to be assassinated for disobedience. Ani and Dana now are in for the fight of their lives to protect each other as well as the lives of their dedicated friends who have joined them on their mission for survival. If Dana and Ani can make it through this time of uncertainty, Ani can take her new place as vampire queen. Soul Sisters is expected to be a trilogy; The book also features a multicultural cast of characters that brings a new edge of chic to the vampire world.

Janiera Eldridge loves feeding her book addiction and putting all her crazy stories on paper. When she is not immersed in the world of fiction, she is working as an entertainment freelance writer.
Janiera also enjoys connecting with other authors and supporting their work on her book blog Books&Beauty.